The Minister of Climate Change and Environment, Maryam Al Muhairi, stated that the UAE has invested more than 57 billion dollars in projects that transform energy locally and globally, noting that "the idea of ​​abandoning fossil fuels completely is not logical, but we have to reduce carbon levels." That's fine 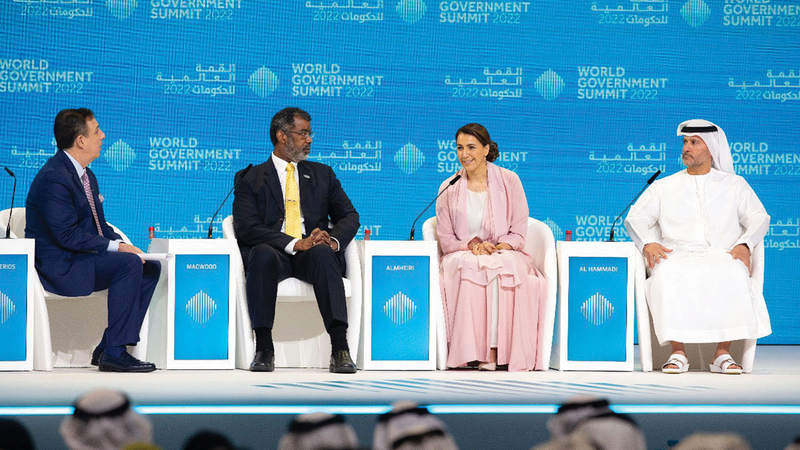 The Minister of Climate Change and Environment, Maryam Al Muhairi, stated that the UAE has invested more than 57 billion dollars in projects that transform energy locally and globally, noting that "the idea of ​​abandoning fossil fuels completely is not logical, but we have to reduce carbon levels."

This came during the session “Peaceful Energy and the Future of Global Prosperity” within the activities of the World Government Summit 2022, during which the participants stressed the need to direct more investments in the medium and long term, to enhance the pace of energy transformation, increase the shares of clean sources, and innovative solutions from the global energy mix. To ensure a better sustainable future.

In addition to the Minister of Climate Change and Environment, the Director-General of the Nuclear Energy Agency of the Organization for Economic Cooperation and Development, William Magwood, and the CEO of the Emirates Nuclear Energy Corporation, Mohammed Ibrahim Al Hammadi, participated in the session.

Al Muhairi said that the energy sector’s contribution to greenhouse gas emissions, which amounts to two-thirds of the total emissions, requires focusing on energy transformation efforts and increasing the shares of clean sources globally, stressing that the idea of ​​completely abandoning the use of fossil fuel energy is illogical, with millions of people around the world suffering from lack of energy. The ability to fully access energy.

She explained that the transition process must be fair and gradually, relatively quickly, to achieve the equation of environmental protection, enhance capabilities to confront the challenge of climate change, and ensure sustainable economic development, and access to energy for all people at the same time, noting that this will be emphasized during the two climate summits. The next two are "COP 27" in Egypt, and "COP 28", which will be hosted by the UAE in 2023.

She pointed out that the UAE 16 years ago began its journey to diversify energy sources and enhance efforts to reduce emissions, as it invested $40 billion in clean energy projects locally, and $17 billion in spreading and promoting the use of these clean and renewable solutions globally, and has become a citizen of three of the largest energy projects. Solar in the world, and the first Arab country in the use of peaceful nuclear energy.

For his part, William Magwood said that there are more than 50 million people around the world who do not have access to energy, so any talk of the need to reduce production to protect the environment is illogical, and reliance on clean sources must be increased.

He added that the UAE has a clear future vision and is able to achieve it, and it represents a pioneering model in this field. Several decades ago, the region was nothing but a desert, and now it has turned into a state that fascinates the world in many fields, including energy transformation, despite being one of the main producers. However, it is adopting a strong strategy for energy transformation and reliance on renewable sources such as solar and clean energy, including the Barakah nuclear power plant project.

He pointed out that the region needs to expand its reliance on clean energy solutions to produce electric power.

Mohammed Ibrahim Al Hammadi stated that the founding father, the late Sheikh Zayed bin Sultan Al Nahyan, may God rest his soul, had a vision to have sustainable and safe energy, which the UAE, thanks to the vision of its leadership, was able to achieve by adopting and implementing clean and renewable energy solutions. , which will represent 50% of the total domestic energy mix by 2050.

He added that the nuclear energy project represents one of the most important sources of safe and sustainable energy, and will provide 25% of the country's electrical energy needs with its full operation.