The army and police are on high alert.. Israel allows an extremist MP to storm Al-Aqsa and warns a Palestinian of the repercussions

The occupation police allowed MK Itamar Ben Gvir to storm Al-Aqsa Mosque, Thursday morning, and declared a state of high alert after five were killed in an attack by a Palestinian youth on Tuesday. 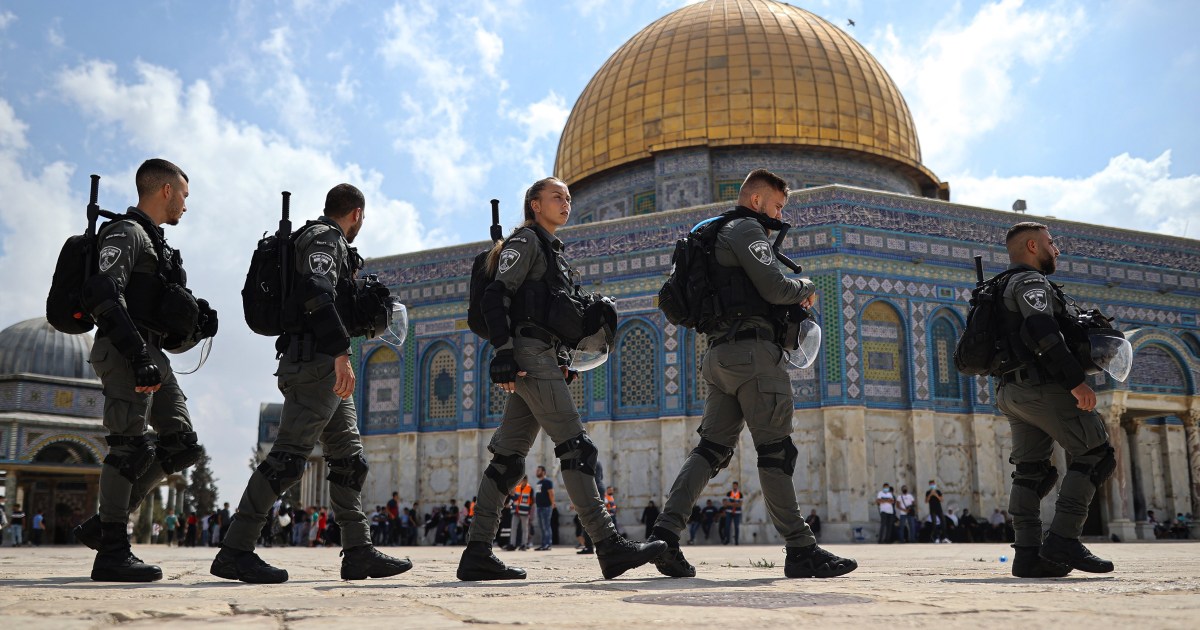 Bin Gvir had announced earlier his intention to storm Al-Aqsa Mosque, whether the police granted him a permit to enter Al-Aqsa or refused, and called on the settlers supporting him to join him in this storming.

This comes at a time when the West Bank and the 48 territories are witnessing an atmosphere of tension against the backdrop of the escalation of the occupation forces' measures and the escalation of settler attacks, coinciding with 3 operations that took place inside Israeli cities in one week.

He added, during his inspection of the headquarters of the Central Brigade, that he had issued orders to the army and security services to pursue those he called saboteurs and their aides "to restore calm and security to the citizens."

In this context, the Palestinian National Authority warned yesterday, Wednesday, of the repercussions of the Israeli police allowing Itamar Ben Gvir to storm Al-Aqsa Mosque.

Mahmoud al-Habbash, the advisor to the Palestinian president for religious affairs and Islamic relations, criticized the police decision.

He said that this decision "to further provoke the feelings of the Palestinians and hundreds of millions of Muslims around the world", and "will have serious repercussions."

Al-Habbash stressed, in a statement, that "the occupying state is playing with fire, and is dragging the region and the world into a spiral of religious war."

Last year, during the holy month of Ramadan, Jerusalem witnessed escalating attacks by the Israeli police and settlers, especially in the vicinity of Al-Aqsa Mosque, Bab Al-Amud and Sheikh Jarrah neighborhood, which resulted in the injury of hundreds of Palestinians, including critical cases, and the arrest of dozens.

These attacks resulted in a military battle between Israel and the Palestinian resistance factions in the Gaza Strip between May 10 and 21, 2021, which led to the death and wounding of hundreds of Palestinians, while the resistance responded by firing thousands of rockets at Israeli cities.

On the other hand, the White House said that US President Joe Biden offered his condolences yesterday, Wednesday, to Israeli Prime Minister Naftali Bennett, during a phone call, a day after the killing of 5 people in a Tel Aviv suburb by a Palestinian gunman.

And the White House said, in a statement, that "Biden expressed his sincere condolences after the horrific terrorist attacks that killed 11 people in 3 Israeli cities."

Biden affirmed that "the United States stands firmly and firmly with Israel in the face of this terrorist threat and all other threats" that beset it.

The number of dead in the three attacks in Israel within a week rose to 11, including two Ukrainians, a policewoman with French and Israeli citizenship, and an Arab Christian policeman.

Yesterday, Wednesday, the Israeli police declared a state of high alert and deployed thousands of soldiers inside the cities, and the Israeli army announced that additional reinforcements had been pumped to the borders of the West Bank and Gaza Strip, after an attack by a Palestinian youth the day before yesterday, Tuesday, coinciding with the commemoration of Land Day.

The Israeli police pushed thousands of its members into cities and gatherings, and deployed its forces in crowded places, central stations and commercial markets, after Inspector General of Police Yaakov Shabtai ordered to raise the state of alert to the highest level.

And Israeli Defense Minister Benny Gantz decided to support the police with 1,000 soldiers to help in "internal security efforts," and declared a state of alert in preparation for "various escalatory scenarios."

The army also decided to allocate 15 companies, some of them special units, to intervene in the cities located within the Green Line, according to a statement announced by the IDF Chief of Staff, Afif Kohavi.

Yesterday evening, the Israeli army announced that additional reinforcements had been pumped into the seam area with the West Bank, after the 27-year-old Diaa Hamrasheh carried out an attack east of Tel Aviv, killing 5 Israelis and wounding 6 others, before he was martyred by Israeli police fire.

Army spokesman Avichai Adraee announced, in a statement, that the army, the Shin Bet and the Border Guard launched a military campaign in the village of Yabad, near Jenin, to arrest wanted men suspected of involvement in Tuesday's attack, adding that "an engineering survey of the perpetrator's house was carried out in preparation for its demolition."

The attack is the third in a week, after a stabbing and trampling attack last week in the city of Beersheba (south) that killed 4 Israelis, and a shooting last Sunday in Hadera (north) that killed two.