On Monday, Ukraine presented proposals to end the Russian invasion of its territory, while Russia responded with pledges, during negotiations held by the two parties in the Turkish city of Istanbul. 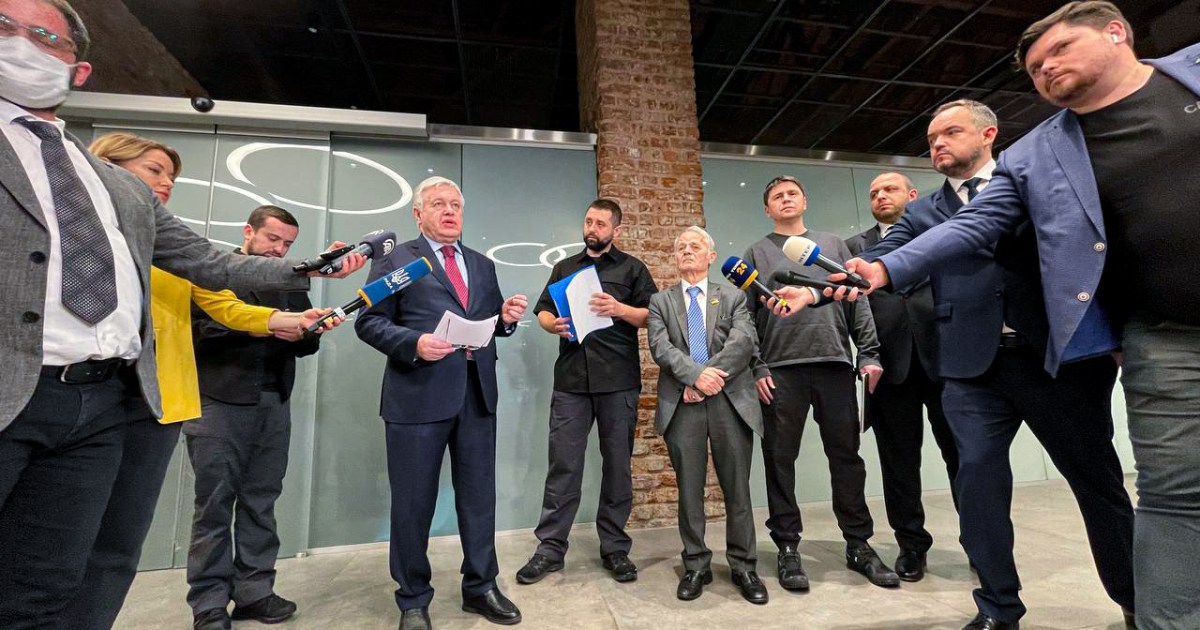 On Monday, Ukraine presented proposals to end the Russian invasion of its territory, while Russia responded with pledges, during negotiations held by the two parties in the Turkish city of Istanbul.

Negotiations began on Tuesday in Istanbul, amid hopes that it would lead to an end to the war, which has been going on for more than a month.

On Tuesday, Turkish Foreign Minister Mevlut Cavusoglu welcomed the "most important progress" in negotiations between Russia and Ukraine since the outbreak of the war, in the tour hosted by Istanbul.

"It is the most important progress since the start of negotiations," Davutoglu said.

Ukraine has proposed adopting a neutral status in exchange for international guarantees to protect it from attack.

Reuters quoted Ukrainian negotiators as saying that they had proposed a situation in which their country would not join alliances or host bases for foreign forces, but that its security would be guaranteed in terms similar to what was stated in "Article 5", the collective defense clause in NATO.

Negotiators told reporters in Istanbul that the proposals would also include a 15-year period of consultations on the status of Russia-annexed Crimea and could only come into effect in the event of a full ceasefire.

"If we can fix these main clauses, and for us this is the most important thing, then Ukraine will be in a situation that will effectively consolidate its current status as a non-member, non-nuclear state in the formula of permanent neutrality," Ukrainian negotiator Oleksandr Chali said.

The military exercises will be conducted with the approval of the guarantor countries.

But the delegation insisted on obtaining an understanding regarding the Crimean island, otherwise there will be no other solution than the use of arms.

For his part, Deputy Russian Defense Minister Alexander Fomin said that Moscow had decided to reduce hostilities near Kyiv and Chernihiv to create conditions for dialogue.

Medinsky said that the Russian delegation received proposals from the Ukrainian side during the negotiations regarding the Ukrainian position on the settlement to be included in the agreement between the two sides.

He noted that Russia does not oppose Ukraine's accession to the European Union.

He explained that he would study the Ukrainian proposals and inform President Vladimir Putin.

Medinsky stressed that these proposals will be presented to Russian President Vladimir Putin as soon as possible, and we will then respond to the Ukrainian side.

At the conclusion of the negotiations, Medinsky announced that the Russian side would take two steps to reduce the occurrence of escalation in Ukraine, one military and the other political.

He also stressed the possibility of holding a direct meeting between Russian President Vladimir Putin and his Ukrainian counterpart, Vladimir Zelensky, in conjunction with the signing of the peace agreement between the two countries (meaning simultaneously: meeting and signing).

Medinsky indicated that the talk is that at first the agreement will be prepared and then it will be approved by the two delegations, then it will be ratified by the foreign ministers, and then the two presidents will meet to ratify it.

But he cautioned that holding such a meeting is not easy, especially since it could be multilateral and with the participation of countries guarantor of peace and security in Ukraine, he said.

He pointed out that the security guarantees requested by Ukraine do not apply to the Crimea and Donbass, meaning that Ukraine gives up the possibility of regaining these areas by military means.