America, Russia and China are competing to own the most powerful hypersonic missiles

The United States has conducted research in relation to hypersonic weapons, which travel at more than five times the speed of sound; Since the early twenty-first century, at least. However, the pace of these programs has accelerated in recent years, due to the progress made by 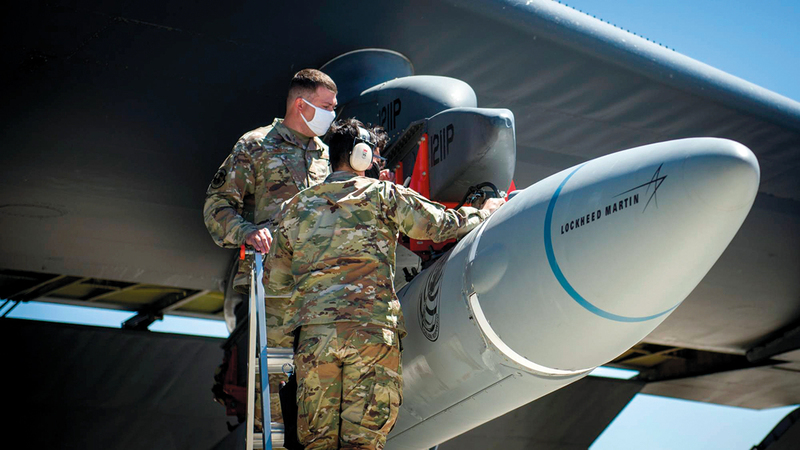 The war in Ukraine witnessed the first field experience

America, Russia and China are competing to own the most powerful hypersonic missiles

The United States has conducted research in relation to hypersonic weapons, which travel at more than five times the speed of sound;

Since the early twenty-first century, at least.

However, the pace of these programs has accelerated in recent years, due to the progress made by China and Russia, in the field of hypersonic weapons.

But recently, the United States has invested in hypersonic glide vehicles, which are flown into low Earth orbit by rockets, before falling to the ground at supersonic speeds.

With Washington's adversaries developing their own hypersonic weapons, the United States' own programs are very important.

The former commander of US Strategic Command, General John Hyten, explained that hypersonic weapons could allow options for "rapid response, long-range, and strikes against threats that are far away, defended, or time-critical when other forces are not available or Access denied.

Accordingly, “in the United States hypersonic weapons are likely to require greater accuracy and would be more technically difficult to develop than Chinese and Russian nuclear-armed systems,” explains a recent report from the Congressional Research Service.

The report cites an expert who explained that "a nuclear-armed glider would be effective thanks to the massive effects of a nuclear explosion."

The United States currently has several hypersonic weapons programs, including two with the Air Force, one with the Army, and one with the Navy.

Although Russia has pursued research on hypersonic weapons since the 1980s, Moscow has accelerated its research in the past 10 years, in part, in response to US research in this area.

As for China, the programs for this type of weapon are somewhat opaque.

In addition to the DF-17, a medium-range ballistic missile, Beijing has also tested the DF41 ICBM, which can be modified to launch hypersonic glide vehicles, both nuclear and conventionally armed.

The country has also reportedly been working on a prototype of the "Starry Sky 2" hypersonic vehicle.

However, any regulation of hypersonic weapons research and production is likely to be out of reach.

Glide vehicles, which are hypersonic, which are launched from a missile, but glide towards their target.

The "Kinzal" is a maneuverable air-launched ballistic missile, a modified version of the Russian "Iskander" missile.

The Iskander missile has already been used in the (Russian-Ukrainian) conflict several times, but it was launched from the ground.

"It's very similar," said Tom Karako, a fellow at the Center for Strategic and International Studies in Washington.

According to Russian media, the Kenzal can reach a speed of Mach 10 (12,250 kilometers per hour).

Russia conducted a test of this weapon in July 2018, and it was launched from a modified MiG-31 fighter, according to US intelligence.

This information was reviewed in a March 17 Congressional Research Service report.

The missile reached a target at a distance of about 500 miles.

The US report states that the "Kenzal" could eventually be equipped with a nuclear warhead, and is capable of striking land and sea targets, although the report's authors cautioned that the weapon's performance characteristics have not been verified by American intelligence, and that analysts are skeptical. .

The missiles are meant to evade advanced defenses.

Russian President Vladimir Putin unveiled the Kinzal during a nationally televised address ahead of Russia's 2018 presidential election. At the time, the Pentagon downplayed Putin's speech, saying that US assessments had already taken into account Russia's weapons capabilities, according to the report. For the Guardian newspaper.

“It is a misconception to think that these things are unbeatable and unstoppable,” Karako said. “At the end of the day, they are just missiles.”

Russia, China, and the United States have the most advanced missiles in this field, but other countries, such as Japan, Germany, India and Australia, are developing their own hypersonic missiles.

• The US report states that the "Kenzal" could eventually be equipped with a nuclear warhead, which is capable of striking land and sea targets.

• 12250 kilometers per hour, the speed of the Russian "Kinzal" missile.