Mondial-2022: Italy tries its luck again at the play-offs 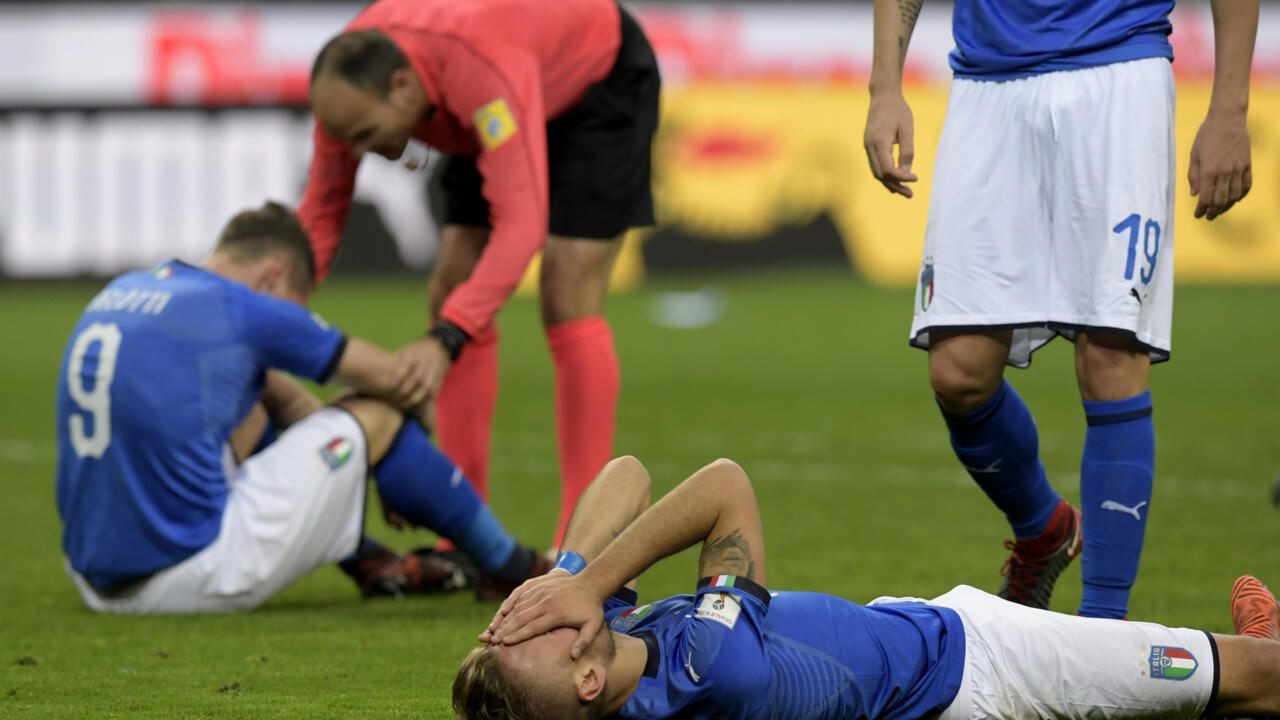 "Our goal is to win the World Cup. But for that, we have to win these two matches," said the always very optimistic Italian coach.

He is back to the wall for the first time, in four years in office, before the play-off semi-final against North Macedonia on Thursday (8:45 p.m.) in Palermo.

Italian coach Roberto Mancini, during training for Squadra Azzurra, on March 23, 2022 in Palermo, on the eve of the semi-final of the 2022 World Cup in Qatar against North Macedonia Alberto PIZZOLI AFP

To hope to play the qualification in Portugal, at Cristiano Ronaldo, or in Turkey, Italy quadruple world champion (1934, 1938, 1982, 2006) must first avoid the overflow of confidence against the 67th nation world.

Because the refrain of "Magic Nights" which carried Giorgio Chiellini and his family to the roof of Europe last summer has since experienced several false notes: the end of three years of invincibility (37 matches), in the League of nations against Spain, and above all the direct ticket for the World Cup abandoned to Switzerland.

The fault in particular of two draws against the "Nati" (0-0, 1-1) with two missed penalties by Jorginho, who has become the symbol of the return to ordinary azzurro, and another against Bulgaria (1-1).

Italian midfielder Jorginho misses his penalty against Swiss goalkeeper Yann Sommer, during their qualifying match for the 2022 World Cup in Qatar, November 12, 2021 at the Olympic Stadium in Rome Alberto PIZZOLI AFP / Archives

And here is this Italy queen of the draw - crowned in penalties at the Euro - forced to go through perilous play-offs, like four years ago, when it failed in round-trip matches against Sweden (0- 1, 0-0).

An "apocalypse" for the whole country, deprived of the World Cup for the first time since 1958. A still sharp burn for nine players still present in the group: Bonucci, Chiellini, Immobile, Belotti, Verratti, Insigne, Jorginho, Florenzi and Bernardeschi.

The front pages of the 2 main Italian sports newspapers, on November 14, 2017 in Milan, the day after Italy's draw (0-0) against Sweden at the San Siro Stadium, synonymous with non-qualification for the 2018 World Cup in Russia (first leg 0-1) Andreas SOLARO AFP/Archives

“Since November 2017, the climate has changed, there is more enthusiasm and confidence,” assures Marco Verratti.

"Those who lived the experience of four years ago will have this lucidity to better manage emotions", also wants to believe the veteran Chiellini, who intends to go to Qatar to "finish in style" with the azzurro jersey.

"Perhaps we shouldn't have ended up there, but that's football", underlines Mancini, "confident" in his players at the origin last summer "of a victory to which no one, but absolutely no one believed".

Mancini is not worried about the psychological state of his goalkeeper Gianluigi Donnarumma, whose March turned sour at Paris SG with his mistake against Real Madrid in the Champions League, or the precarious physique of Chiellini and Leonardo Bonucci , in the recovery phase and rather expected for the possible final of these high-risk dams.

The coach has only one leitmotif: "the game".

This will require Italy to regain its summer lightness, in a full stadium (30,000 spectators) for the first time in Italy since the start of the pandemic.

In the absence of Federico Chiesa (season over), it will above all be necessary to score.

Counting on a Ciro Immobile finally radiant in the azzurro jersey.

On the freshness and automatisms of the attacking trio of Sassuolo Berardi-Scamacca-Raspadori.

Or on the motivation of Cagliari striker Joao Pedro, born in Brazil 30 years ago and called up for the first time with Italy, because preferred to Mario Balotelli.

The joy of Italian striker Ciro Immobile, after scoring the 2nd goal against Turkey, during their Euro-2020 Group A match, June 11, 2021 at the Olympic Stadium in Rome Mike Hewitt POOL/AFP/ Archives

Finally, we will have to be wary of this North Macedonia still capable of exploits, even without the "national hero" Goran Pandev, who has retired internationally: the small country of 2 million inhabitants had achieved a huge one a year ago , in Germany (2-1), before claiming second place in the group ahead of Romania and Iceland.

The joy of the players of North Macedonia, in front of the German striker Timo Werner, after their victory (2-1), during the qualifiers for the 2022 World Cup in Qatar, March 31, 2021 in Duisburg Ina Fassbender AFP / Archives

"We know they defend well and they have important technical qualities. We have to stay calm," Mancini said on Wednesday.

Napoli midfielder Eljif Elmas, who scored the decisive goal for the Macedonians in Germany, is suspended on Thursday.

But his coach Bobi Milevski, no less confident than Mancini, called him up anyway, thinking of the possible final.

North Macedonia coach Blagoja Milevski during his team's last training session on March 23, 2022 in Palermo, on the eve of the World Cup play-off semi-final against Italy Alberto PIZZOLI AFP

"Everyone is ready. We are not here by chance, we are ready to play a great game," he warned.