Greece on Thursday signed the purchase from France of three Belharra frigates, planned as part of the "strategic partnership" between the two countries, as well as six additional new Rafale combat aircraft. 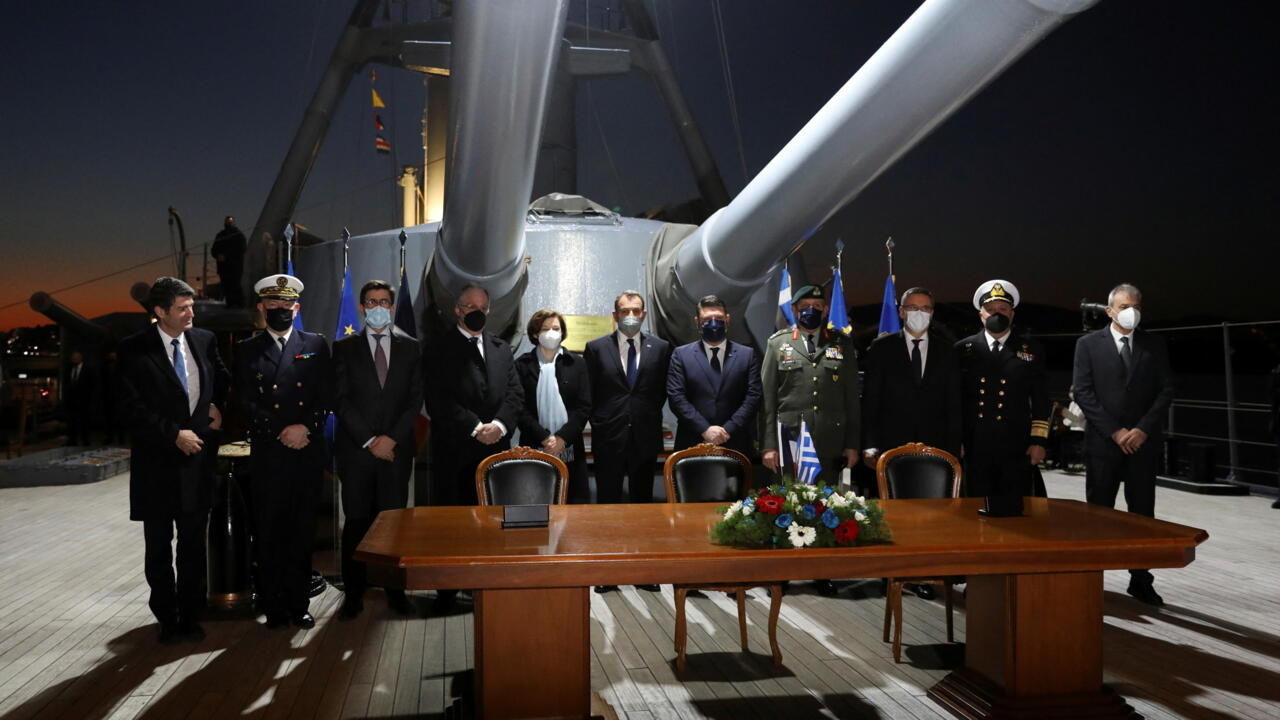 This is a new step in the strategic alliance between the two countries.

On the eve of its national holiday, Greece signed, Thursday, March 24, the purchase from France of three defense and intervention frigates (FDI) and six Rafale combat aircraft.

France is proud to contribute to strengthening Greek security.

Greece today acquires 3 additional FDI and 6 Rafale, which are added to the 18 Rafale already ordered.

"Ensuring the defense of a country requires being ready for all eventualities, even the harshest", declared the French Minister for the Armed Forces, Florence Parly, "convinced that our defense begins offshore" as "we have verified again from the very beginning of the invasion in Ukraine".

Greek Defense Minister Nikos Panagiotopoulos spoke of a "significant step in our bilateral defense cooperation and more generally in relations between France and Greece".

A contract worth more than 5.5 billion euros

Against the backdrop of tensions with neighboring Turkey, Greece decided last year to strengthen its military capacity by ordering 24 Rafale combat aircraft and three frigates from Paris, for a total amount of more than 5.5 billion euros.

"Greece is choosing the latest generation frigates which bring together the best of French naval know-how", welcomed Pierre Éric Pommellet in a press release, welcoming a "new chapter in the strategic alliance between Greece and France. ".

In September, the two countries concluded a "strategic partnership" in Paris, which Florence Parly described Thursday as a "major asset" to "build a stronger European defense tomorrow".

The frigates designed for high-intensity clashes on the high seas will be built by Naval Group, in Lorient, in western France, to be delivered to the Greek navy in 2025, for the first two, and 2026, for the third. .

The contract provides for an optional fourth frigate, the supply of MU90 torpedoes as well as Naval Group support to the Greek Navy.

The CEO of Dassault Aviation, Éric Trappier, also made the trip to sign a contract for the delivery of six additional new Rafales, to the latest standard, from the summer of 2024.

The sale of 18 of these combat aircraft had already been signed last year, six of which were delivered to Greece, while the others will be fully deployed by the summer of 2023, specifies the aircraft manufacturer. in a press release.

Éric Trappier praised AFP for a "strong mark of confidence" from the Greek government in the Rafale, "which illustrates the strength of the strategic partnership between France and Greece and between Dassault and Greece for 50 years" .

"The war in Ukraine shows to what extent air superiority is a key success factor", also noted Florence Parly, before going to a delegation at nightfall aboard the aircraft carrier Charles-de-Gaulle.

Calming relations between Athens and Ankara

The French ship made a stopover off Piraeus on the occasion of the Greek national holiday.

Rafales will take off there on Friday to take part in the military parade in Athens.

Greece celebrates the beginning of the war of independence from the Ottoman Empire in 1821 on March 25.

The signing of these new contracts comes as relations appear to be calming down between Greece and Turkey, which have promised to cooperate more in the face of the war situation in Ukraine.

Greece and France had started to strengthen their military cooperation in the summer of 2020 to counter Turkish attempts to explore for gas in disputed areas of the eastern Mediterranean.

The "strategic partnership" concluded in September between Paris and Athens includes a mutual assistance clause.

However, an "unexpected" summit in Istanbul between Turkish President Recep Tayyip Erdogan and the Greek Prime Minister "helped improve bilateral relations due to the war in Ukraine", former vice-president Christos Rozakis told AFP. of the European Court of Human Rights (ECHR).