Zhejiang recruits were presented with the Longquan Sword

China News Service, Lishui, March 22 (Reporter Fan Yubin) Holding the "Sword of Congjung", wearing a 21-style camouflage uniform, wearing a big red flower on his chest, and wearing a "Glorious Enlistment in the Army" ribbon on his shoulders, 21-year-old Zhejiang Longquan recruit Ye Jinlong is heroic Sa Shuang, continuing the "military dream" of two generations, he finally got his wish. He said, 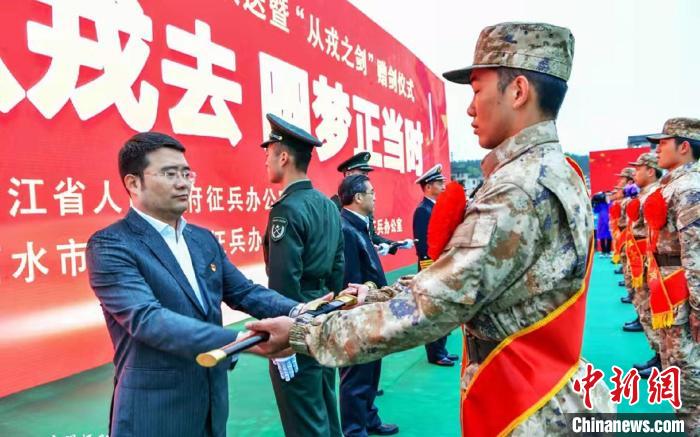 China News Service, Lishui, March 22 (Reporter Fan Yubin) Holding the "Sword of Congjung", wearing a 21-style camouflage uniform, wearing a big red flower on his chest, and wearing a "Glorious Enlistment in the Army" ribbon on his shoulders, 21-year-old Zhejiang Longquan recruit Ye Jinlong is heroic Sa Shuang, continuing the "military dream" of two generations, he finally got his wish.

On the 22nd, the main venue of the Zhejiang Province 2022 Spring Recruits Farewell and "Cong Rong Sword" Sword Gifting Ceremony was held in Longquan City, Lishui City, Zhejiang Province, and 9 counties (cities, districts) of Lishui were organized simultaneously in different places by video.

At the ceremony site, representatives of recruits from Zhejiang Province in the spring of 2022 were presented with the "Sword of Congjun" engraved with the number of the enlistment approval letter.

Since the Qin and Han Dynasties, China has had a tradition of gifting swords to soldiers on expeditions.

More than 2,500 years ago, Ou Yezi forged the sword Longyuan, and the Longquan sword not only carries a profound cultural tradition, but also symbolizes the indomitable spirit of the Chinese nation.

On the day of the event, on the banks of the Oujiang River, it was raining in the spring, and the "Sword of Congjun" was presented to the recruits in the rain, which could even inspire the recruits to brave the difficulties and forge ahead.

After the swords were presented, the recruits shouted their oaths, solemnly flashed their swords, and sang the original song "Going to the Rong with a Sword" with the representatives of the retired soldiers. The singing was loud and blood boiled.

"When I was in college, I saw on the Internet that recruits were given the 'Sword of Congrong', and I admired it. I think this is what young people should be like, and I also hope to have a 'Sword of Congrong'. , to fulfill my dream of 'congjun with the sword'." Zhou Chenyong, a recruit from Longquan, said in an interview, "To take over the 'sword of Congjun' is to take over the entrustment of the elders of the hometown. To cross the gate of Congjun is to protect the family. The duty of defending the country. After entering the military camp, I will temper myself and surpass myself."

Photo by Yin Xiaoming at the sword-brightening ceremony

For Chen Yili, a recruit from Longquan, his military career is still fresh in his memory.

"I am very proud to receive the 'Sword of Congjun' when I enlisted in the army for the second time. My heart is still in the army, and I can finally return to the army, hone and set off again." Chen Yili told reporters that when he was "bright sword" When he shouted "'The Sword of Cong Rong' is unsheathed, obeys the party's command, can win battles, and has a good style", his heart was surging, and the mission and responsibility of protecting the family and the country came into being.

Talking about about to embark on a new journey with new comrades in arms and fulfill the sacred mission of protecting the family and the country, Longquan recruit Zeng Peilun's childhood dream finally came true.

He said, "The horn of enlistment has been sounded. With the mission of joining the army to serve the country and the ardent expectations of the people in our hometown, we are about to enter the fiery military camp to realize our youthful dreams. Let us always keep in mind today's glory, and cut through the waves after the army. Forge ahead with our swords, and use practical actions to win the glory that belongs to us."

"A strong country must have a strong army, and a strong army can lead to national security." Performing military service in accordance with the law and joining the army to serve the country are the sacred duty and obligation of every young person of the right age.

"It is our duty to send our children to join the army." A representative of the parents of the recruits sent a message to the recruits in his speech at the ceremony, "I hope that no matter what setbacks and difficulties you encounter after you arrive in the army, you can keep in mind the 'sword of joining the army' that will be awarded at this moment, and do To be strong, courageous, just and responsible, firm in ideals and beliefs, stand firm on the people's stand, cultivate excellent skills, devote yourself to the great cause of building a country, and always maintain a forward attitude of hard work, and work with hundreds of millions of people to realize the new long march of the Chinese dream of the great rejuvenation of the Chinese nation. Fight hard on the road.”

"Giving the sword to you, I hope you will hold the three-foot Qingfeng sword and be dedicated to protecting your home and country." When the recruits were about to leave their hometown and embark on a new journey, Du Xinglin, the executive deputy mayor of Lishui City, sent a message to the recruits to strengthen political tempering. , to be a faithful and reliable person; to forge excellent skills, to be a resolute and brave person; to be determined to protect the family and the country, to be a person with justice and responsibility.

At the ceremony site, representatives of outstanding male and female soldiers who enlisted in the army in 2021 from Longquan City gave speeches in a video manner, telling that the "Sword of Cong Rong" was infused with hard and fortitude quality, the spirit of daring to show the sword and the courage to overcome difficulties at the beginning of his enlistment. Recruits are highly motivated and inspired.

The recruits were taken by Fan Yubin from "From the Rongmen"

The reporter learned that, combining the well-known Longquan sword and the ancient Chinese tradition of gifting swords to soldiers, in the first half of 2021, the Longquan Municipal Party Committee, Municipal Government, and the Municipal People's Military Department headed the farewell ceremony for new soldiers and the "Cong Rong Sword" gifting ceremony; For half a year, the gift of swords was promoted in the whole city of Lishui.

In the past few days, five districts and cities across Zhejiang have held sword-giving ceremonies successively. Each of the recruits who joined the army in Zhejiang this spring has an exclusive "Sword of Congjun".

It is reported that the "Sword of Congrong" adopts the Han sword system. Each sword is engraved with the unique number of each recruit's approval letter. The sword body is simple and tough, representing the spirit of loyalty, perseverance and bravery of Chinese soldiers.

The sword is 81 cm long, which means that the Chinese People's Liberation Army was born in the "August 1" Nanchang Uprising.

The "Sword of Congjung" given to the recruits will be delivered to the recruits' homes by the recruiting offices of the counties (cities, districts) and the service stations for retired soldiers in the towns (streets) in Zhejiang Province.