On Monday, March 13th, Iran fired about 12 "Fateh-110" ballistic missiles at targets in the city of Erbil in Iraqi Kurdistan, near the US Consulate compound. cars and 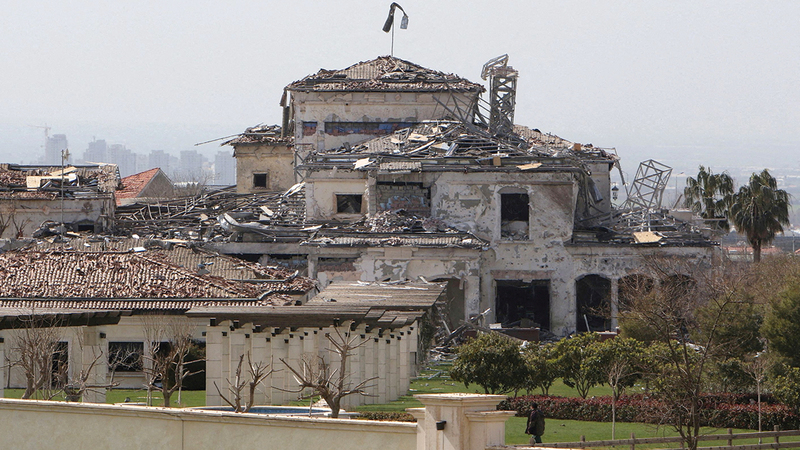 It raised further concerns about the possibility of further escalations

On Monday, March 13th, Iran fired about 12 "Fateh-110" ballistic missiles at targets in the city of Erbil in Iraqi Kurdistan, near the US Consulate compound. Vehicles and property, including the newsroom of Kurdistan 24 television and radio, raised further concern about the possibility of additional escalations, amid faltering efforts to revive the Iranian nuclear agreement, officially known as the Joint Comprehensive Plan of Action.

When announcing its responsibility for the strike, the Revolutionary Guards in Iran said that it had targeted the "strategic center of the Zionist conspiracy and evil" in Erbil, in retaliation for Israel's raids on the Syrian capital, Damascus, on the seventh of this March, which resulted in the killing of two Revolutionary Guards.

And he vowed to respond "in a harsh, stern and destructive manner against any adventurous and hateful measures."

The attack targeted a "Mossad" cell.

Later on the same day, Iranian-backed media began claiming that the Revolutionary Guards' attack on Erbil had killed and wounded many members of the Israeli "Mossad", and that this was in response to an Israeli drone attack in the Kurdistan region of Iraq.

In his comments to the media, the governor of Erbil denied that Israel was in the Iraqi Kurdistan region, but the Washington Post reported that US officials believed the Revolutionary Guards targeted "homes a suspected Mossad cell was operating there."

In any case, this is not the first time that Iran has claimed to have targeted Israeli intelligence facilities in Iraqi Kurdistan, as it published similar reports in April and September of 2021, but apart from the mere accusations, it is clear that the Iranian strike on March 13 is the last Escalations in the confrontation between Iran and Israel in recent years in the Middle East.

Iran has become significantly more sensitive to the Israeli presence in recent years, especially since the United States assassinated the commander of the Republican Guard, Qassem Soleimani, with the help of Kurdish special forces and Israeli intelligence in January 2020. This can help explain why the Revolutionary Guard began in October 2021 The largest military exercise yet on Iran's border with Azerbaijan, the Revolutionary Guards' concerns about Israel's presence in the South Caucasus have amplified a minor border dispute with Azerbaijan into something highly contentious.

However, this sensitivity about the Israeli presence in Iraq poses a threat to the United States. Following the ballistic missile attack, the US State Department spokesman, Ned Price, issued a statement describing the attack as a “flagrant violation of Iraq’s sovereignty,” but he indicated that “there is no indication that The attack is directed against the United States.

"No American citizen was hurt, and neither was any American facility," National Security Adviser Jack Sullivan told CBS. These statements are noteworthy, for two reasons: First, they suggest that Iran's missile capabilities have become Now it is well developed, and that the Revolutionary Guards are able to destroy any target accurately, as the target near the American consulate was destroyed, without causing any damage to it, or without these missiles being destroyed by American anti-missile missiles.

The second is that Iran has shown a great deal of restraint, without responding to aggression against it.

But the Revolutionary Guards' strikes could indicate that Iran has become more emboldened and ready to retaliate and take revenge on its enemies.

The missiles have been used in retaliatory strikes six times since 2001, including five times in 2017. Alireza Ahmadi, an Iran analyst, says that many of the ballistic missile strikes were not in response to direct attacks against Iran, and perhaps the Guards' attack The latest revolution on March 13 indicates Iran's growing self-confidence.

Ali Reza pointed out that Iran is working to develop the accuracy of its missiles in order to be able to modernize its conventional army, and accordingly, Iran may continue to rely on ballistic missiles to deter and confront the worst threats to its security.

This is not good news for the United States, which has always sought to avoid getting involved in the Iranian-Israeli conflict, even though it has put all its weight in support of Israel, and has struck Iranian military installations on several occasions.

Although US President Joe Biden issued orders to strike Iranian-backed militias in Syria in February 2021, it is unclear whether his administration could support Israeli military operations against Iran.

Certainly, the tension between the United States, Iran, and Israel has long complicated Tehran and Washington's slow efforts to revive the Iran nuclear deal.

The Israeli government is strongly opposed to restoring the Iranian nuclear agreement to what it was.

But regardless of Moscow's motives, the negotiations stalled.

In fact, despite Iran's caution not to jeopardize its close relationship with Russia, Iranian Foreign Minister Hossein Amir Abdollahian declared, "We will not allow any foreign player to affect our national interests," and asked for an "clarification" from Russia about its position. .

Washington's reaction was more daring, as US officials rejected Russia's demands, which "have nothing to do with the agreement", and threatened to exclude Russia by searching for alternative solutions if the Russians did not back down from their demands.

The attack will complicate the negotiations

But talking about arrangements for such an option is easier than achieving them. Iran and the United States have not been able to resolve the last thorny and final points to re-enter the nuclear agreement known as the Joint Comprehensive Plan of Action, which may include an exchange of prisoners, and official guarantees that the United States will not leave the agreement again. .

Now, the Iranian missile attack on March 13th on Erbil could complicate the negotiations further.

Although not clearly related to the negotiations, the timing of the IRGC missile attack certainly raises doubts.

• The Revolutionary Guards' strikes may indicate that Iran has become more daring and ready to respond.