For a presidential candidate, the choice of words is rarely trivial. Throughout the campaign, France 24 explains the reasons that led a candidate for the Élysée to pronounce a… 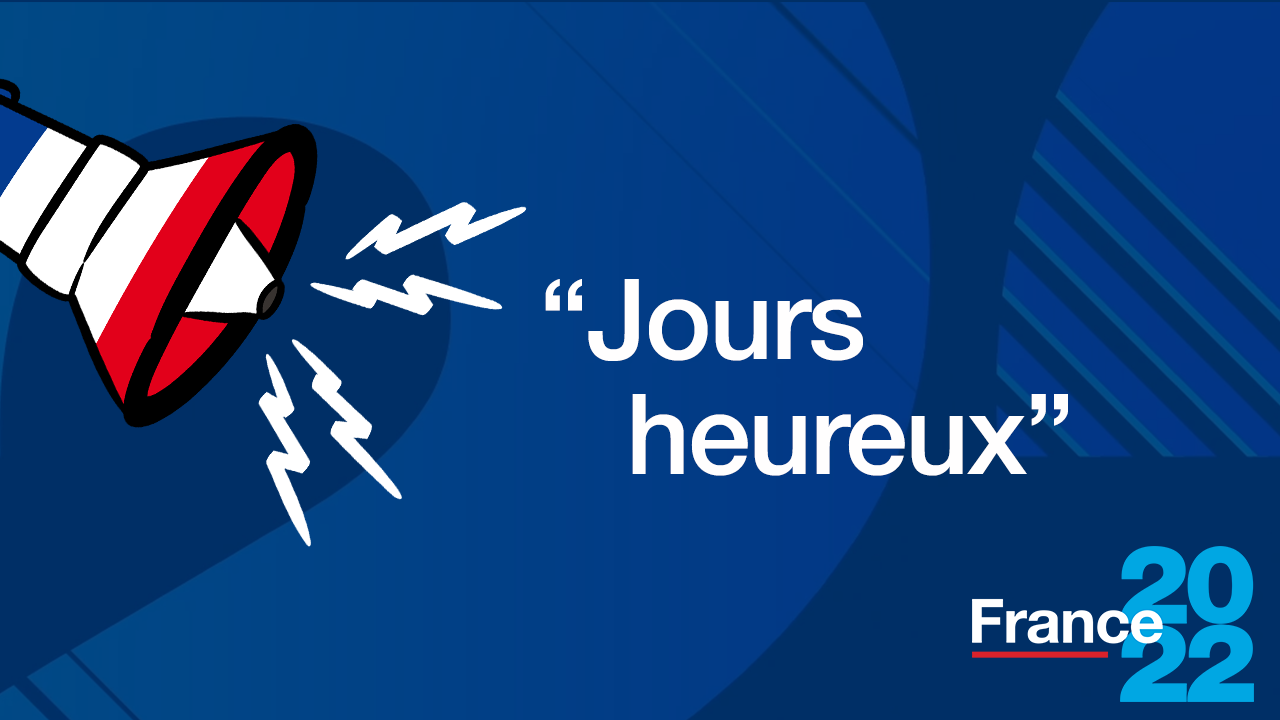 It is in the austere conference room of the PCF headquarters, looking like a bunker, place du Colonel Fabien, in the 19th arrondissement of Paris, that Fabien Roussel unveiled for the first time, Monday January 24, his program based on a "social, ecological, republican pact".

"Tonight, I am launching an appeal, an appeal to build happy days. […] Let's build this France of happy days together".

Ambitious battle plan with jovial and festive tones that contrasts with the concrete coldness of the place.

By evoking "the happy days", the communist candidate refers above all to history.

Fabien Roussel is not the first to take up this historical reference on his own.

Emmanuel Macron, during his speech on April 13, 2020 delivered in the midst of a health crisis, also alluded to it.

"My dear compatriots, we will have better days and we will find happy days again. I am convinced of that."

Earlier still, during the 2017 presidential campaign, Jean-Luc Mélenchon had also called for "happy days" under the guise of a hologram projected in seven cities in France.

Where does the expression "happy days" come from?

Fabien Roussel, Emmanuel Macron and Jean-Luc Mélenchon are aware that this is a reference to the National Council of Resistance (CNR).

On May 27, 1943, when this group was created in the middle of the war by six political parties, including the Communist Party and two central trade unions, they were already projecting themselves into the post-war period by negotiating the program of "happy days".

“Such a program, put in place at the end of such a traumatic explosion, echoes our own challenge, at a time when our country, brutally brought to a halt by the pandemic, is facing a crisis of unprecedented magnitude. “, recalled Fabien Roussel who tries to give his campaign the framework of the blessed years of the French communist.

In 1945, the party was the first left-wing political force in the country.

Some also see in its slogan "France happy days" an even broader allusion.

Fabien Roussel "echoes not only the social mobilizations of recent years (against the questioning of the welfare state and the major reforms born of the Resistance, Social Security, pensions, etc.), but also the Popular Front" , abounds Jean Vigreux, historian, University Bourgogne Franche-Comté (UBFC) in an article published on February 16, 2022 by The Conversation.

Why does Fabien Roussel use this expression?

Determined to break with the more anxiety-provoking discourse carried by the right and the far right, Fabien Roussel offers another vision of the world based on optimism.

"The tone of the campaign is based on the 'hope' and the 'joy' that underlies the reaffirmed presence of the PCF. These two terms are well-studied elements of language, strong markers intended to "re-enchant the world” and easily opposing a right-wing political vision based on a nationalist and xenophobic, even declining, withdrawal,” said Jean Vigreux.

Its program is also in line with its slogan.

To finance this project to the tune of one billion euros according to his estimates, the pretender to the Élysée intends to launch a “Robin Hood” tax on private jets and on business class travel. who will take their jet or who will be in business class will say that they also finance access to vacations.

One thing is certain, his electoral campaign breaks with the fifteen years of absence of the PCF in a presidential election.

With his "happy days", it seems that Fabien Roussel has above all given a little red to the cheeks of his party.

The other "Words of the campaign" can be found here.