Yesterday, Ireland played melodies of joy and proximity music for two happy occasions, as it celebrated its National Day at "Expo 2020 Dubai", which also coincided with its celebrations of Saint Patrick's Day, so that Al Wasl Square, the beating heart of the exhibition, witnessed various artistic performances from the "Island of Inspiration". The Minister welcomed Do 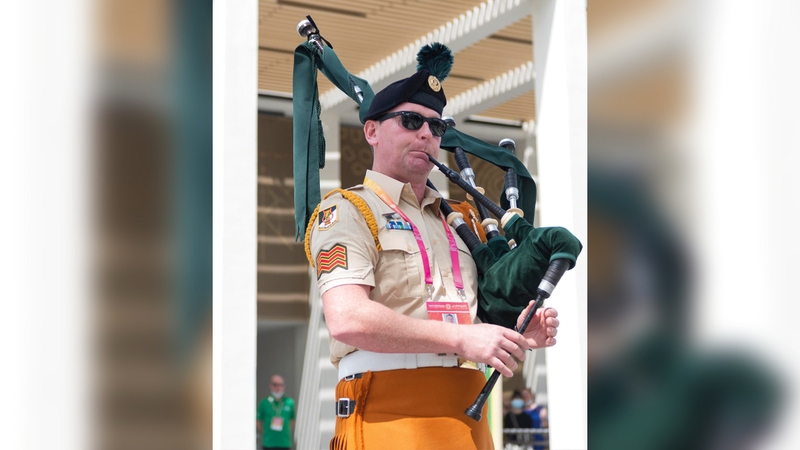 Yesterday, Ireland played melodies of joy and proximity music for two happy occasions, as it celebrated its National Day at "Expo 2020 Dubai", which also coincided with its celebrations of Saint Patrick's Day, so that Al Wasl Square, the beating heart of the exhibition, witnessed various artistic performances from the "Island of Inspiration".

Najeeb Al-Ali said: “With a design inspired by the Newgrange Memorial, the Ireland Pavilion at Expo 2020 Dubai showcases 5,000 years of Irish heritage, literature and knowledge, and invites visitors to explore the country as a place unparalleled in terms of inspiration and creativity.”

He added, "The UAE is proud of its thriving relations with Ireland, and we believe that this country has a lot to offer us and the world at large, due to its regional leadership position in terms of innovation in the field of small and medium enterprises and the dissemination of knowledge, as well as being an important center for technology and investment."

"We are confident that we can push the current bilateral relations with Ireland to new heights, and we look forward to mutually beneficial cooperation between our two countries," he added.

For his part, Dara O'Brien said: "It is a special honor for me to convey Ireland's congratulations on the 50th year of the United Arab Emirates, which is coming to an end in conjunction with Ireland's preparations to celebrate its centenary," expressing his country's admiration for the great strides made by the UAE over half a century. Century, with the emergence of Dubai as a major international hub, provides connectivity on a truly global scale.

He added: "We have developed our wonderful relations with the UAE, and they have flourished through our participation in (Expo 2020 Dubai), the important programs presented in our pavilion, and most importantly through the great cooperation with our partners in this international event, which helped provide unforgettable events, Such as (Expo World Choir), and (River Dance).

Ireland's National Day celebrations at Expo Dubai witnessed an artistic performance of the harp, the national symbol of Ireland, and the instrument also included in the UNESCO List of Intangible Cultural Heritage.

The show also featured a performance of "Cormac Bigley", in which she performed a range of traditional tunes from southwest Kerry, as well as other traditional Irish dances.

The celebrations, which continued yesterday, included a musical performance in Al Wasl Square, sponsored by the National Concert Hall, led by the famous violinist Martin Hayes, in addition to a march led by the Irish Defense Forces, and other events such as storytelling, sports activities and others.

A destination for creativity

Ireland's National Day at Expo 2020 Dubai coincides with Saint Patrick's Day, which was organized by Irish activists for the first time to promote the language of their country and the cultural identity of the Irish people, and Saint Patrick's Day has become an occasion to share the country's rich culture with the world since then.

The Ireland Pavilion seeks to present its country as an absolute destination for inspiration, thanks to its solid and rich heritage based on creativity, imagination and innovation.