The 2022 National Two Sessions will be the tenth since the 18th National Congress of the Communist Party of China.   In addition to attending the plenary meeting of the National People's Congress and expressing congratulations at the CPPCC meeting, General Secretary Xi Jinping participated in the deliberations and discussions with the delegation three times, and had in-depth exchanges with the 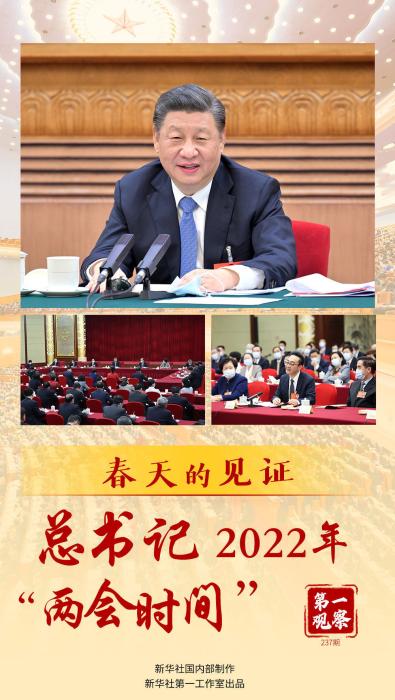 The 2022 National Two Sessions will be the tenth since the 18th National Congress of the Communist Party of China.

In addition to attending the plenary meeting of the National People's Congress and expressing congratulations at the CPPCC meeting, General Secretary Xi Jinping participated in the deliberations and discussions with the delegation three times, and had in-depth exchanges with the deputies to discuss the country's interests.

March 2: The first observation丨From the General Secretary 50 times to the group to see the quality of democracy

From 2013 to 2021, General Secretary Xi Jinping participated in the deliberation and discussion of the delegation 50 times, listened to the speeches of more than 370 representatives and members, communicated and interacted with everyone, and discussed the country.

This is a vivid practice of people's democracy in the whole process, and it is also a window to observe China's democracy.

March 3: The first observation · Moment丨The story of the General Secretary and the Two Sessions in the lens

The oath under the national emblem, two similar photos... The silent shots tell the moving story of General Secretary Xi Jinping listening to the voices of the people, respecting the people's opinions, paying attention to the people's sentiments, and devoting themselves to the people's livelihood.

March 4: The first observation丨This day of the general secretary

Attending a number of important events in one day is a true portrayal of General Secretary Xi Jinping's long-term work, diligent work, and "I will be without myself and live up to the people".

March 5: First Observation丨Participated in the deliberations of the Inner Mongolia delegation for 5 times, the general secretary's speech runs through this theme

This year's two sessions, General Secretary Xi Jinping participated in the deliberation of the Inner Mongolia delegation for the fifth time, and "common" became a high-frequency word in his speech.

The five speeches delivered by the General Secretary of the Inner Mongolia delegation not only guide the development of Inner Mongolia, but also run through the theme of promoting ethnic areas and underdeveloped areas to make up for shortcomings, work together and develop together.

The Inner Mongolia delegation participated in the deliberation and proposed 5 "must be taken", which profoundly revealed the "success code" of China in the new era;

The two important conclusions jointly point to a brighter future for China and a happier life for the people.

On March 7, Xi Jinping, General Secretary of the Central Committee of the Communist Party of China, President of the State and Chairman of the Central Military Commission, attended the plenary meeting of the delegation of the People's Liberation Army and the Armed Police Force at the Fifth Session of the 13th National People's Congress.

He emphasized that governing the army according to law is the basic way for our party to build the army and govern the army, and it is an inevitable requirement to realize the party's goal of strengthening the army in the new era.

This is the 10th year in a row that President Xi Jinping has issued a strong command in an inspiring spring.

"To establish a big food concept."

This point of view made by General Secretary Xi Jinping at the joint meeting of the CPPCC has attracted attention.

As early as 1990 when he was working in Fujian, Xi Jinping proposed in the book "Getting rid of poverty": "The food we talk about now is food, and the concept of big grain has replaced the old concept of taking grain as the key link."

Over the past 30 years, Xi Jinping's "big food concept" has been continuously enriched and developed, reflecting China's economic and social development changes and the direction of "agriculture, rural areas and farmers" from one side.

March 9: First Observation | The General Secretary made these important statements at the two sessions

The annual National People's Congress is a major event in China's political life, and it is also a window for the outside world to observe the direction of China's policies.

The National Two Sessions in 2022 have special significance.

From reviewing the new major achievements of the past year with everyone, to confidently declaring 5 "we will definitely be able to" facing the future; from the strategic vision of paying attention to the "big man of the country", to the heart of boxing that cares about "people's livelihood is no small matter"... …

General Secretary Xi Jinping's important expositions, clear requirements, and ardent expectations will surely inspire the entire Party and the people of all ethnic groups to overcome all difficulties and challenges on the road ahead, and continue to create new and impressive miracles.