The Emirati star Hussain Al Jasmi returned, the day before yesterday, to sing at “Expo 2020 Dubai” with a set of his most beautiful songs on one of the immortal “Expo” evenings, which attracted an audience that gathered hours before the start of the concert in the iconic Al Wasl Square, as he unleashed his voice and resounded amidst The enthusiasm of the crowd 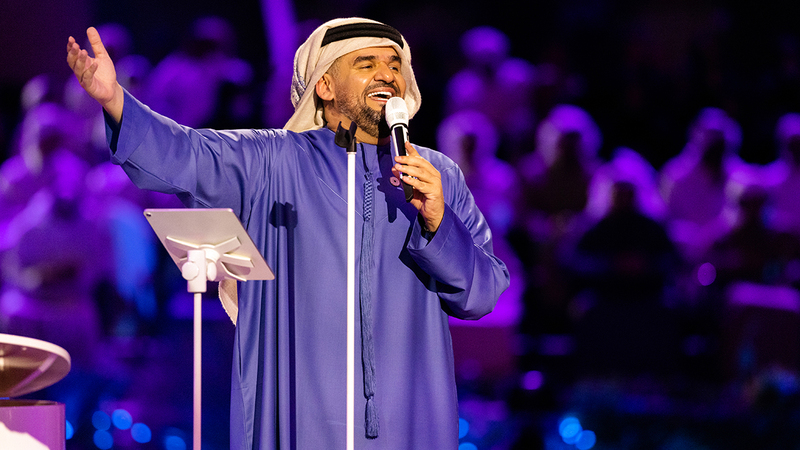 The Emirati star Hussain Al Jasmi returned, the day before yesterday, to sing at “Expo 2020 Dubai” with a set of his most beautiful songs on one of the immortal “Expo” evenings, which attracted an audience that gathered hours before the start of the concert in the iconic Al Wasl Square, as he unleashed his voice and resounded amidst The enthusiasm of the large audience, who enjoyed the performance of the "Ambassador of Expo 2020 Dubai".

The Emirati artist, who is very popular in the Arab region, flirted with the audience with the song "Sitt al-Sabah" in the Egyptian dialect, before returning to the Gulf dialect to sing "It remains for me" and then "The Mountain", which the audience met with a standing ovation.

Whenever Al Jasmi sang, the audience interrupted him to sing along with him, especially in songs that represent signs of his great artistic career, including "Beligh Habeeb", in which the audience did not stop chanting her distinguished words.

Al Jasmi continued to sing for an hour and a half to an audience of various Arab nationalities that filled Al Wasl Square in the heart of the giant site.

Whenever the audience asked the Emirati star for a specific song, he teased them by saying that they are now in the "Expo.. Land of Dreams", and that he will fulfill everything they ask for.

Upon reaching his famous song in Turkish, Al Jasmi took his seat in front of the piano and played and sang to the audience who lived another unforgettable night for the great artist, who was one of the stars of the grand opening ceremony of "Expo 2020 Dubai" at the end of last September.

Al Jasmi considered that his relationship with the “Expo Dubai” added a lot to him from his position as an ambassador for the major global event that is being held for the first time in the Middle East, North Africa and South Asia, adding to the “Expo News” service after the ceremony: “I am proud of my success with (Expo) .. I always wish success to everyone who contributes to the success of any Emirati project, and this is our first ambition, and our love and loyalty to this country.”

Al Jasmi continued: "I sang in my home and among my family and my people, and I am happy that I am (Expo ambassador) for the world, and I am proud to be giving a party in this imaginary place," describing "Expo" as "the ambition, the future and the aspiration for everything that is new and for the future of peoples."

He indicated his readiness to serve his country, the UAE, at any location, after he presented a wonderful evening in front of a large audience at the iconic Al Wasl Square.

He continued, "Everything that serves my country will certainly add to me, and I am happy that I am one of the soldiers of this country."

Al Jasmi revealed that the day before yesterday, the 25th anniversary of his coronation in the "Dubai Nights" program, and the launch of his artistic career.

He explained, "Today, praise be to God, I have completed 25 years in this field... from Dubai.

Today, I consider the presence of such a large audience to be my greatest honor.”

The Emirati star considered his singing in different dialects to mean “culture and love.

I belong to a large and broad country, and I am proud of all its dialects and words, all Arabic dialects mean a lot to me.”

About his singing in other languages, he said: "I love beautiful and difficult melodies, and I was also happy today because I performed the Turkish song on live broadcast, and I challenged myself, and I hope that I have succeeded."

Eternal Expo Nights is a concert series presented by the global event for discerning stars.

The evenings began last October and attracted stars from across the region and the world.

These evenings will be held at Al Wasl Square, the beating heart of Expo 2020, whose dome forms the world's largest 360-degree screen to provide audiences with innovative viewing experiences that employ the latest technologies.

• 25 years since Al Jasmi was crowned in the "Dubai Nights" program, the day he celebrated the Eternal Nights at the "Dubai Expo".

• "I sang in my home and among my family and my people... and I am happy that I am the (Expo) ambassador to the world."

• “I belong to a great Arab country, and I am proud of its dialects and words. All Arabic dialects mean a lot to me.”

Early, and hours before the star Hussein Al Jasmi's concert, large crowds of fans were keen to attend for their favorite star, so that Al Wasl Square witnessed spectra of all Arab nationalities and fans of the owner of many masterpieces, who enjoys great popularity.