From body to heart, how to take care of "youth you" in an all-round way? 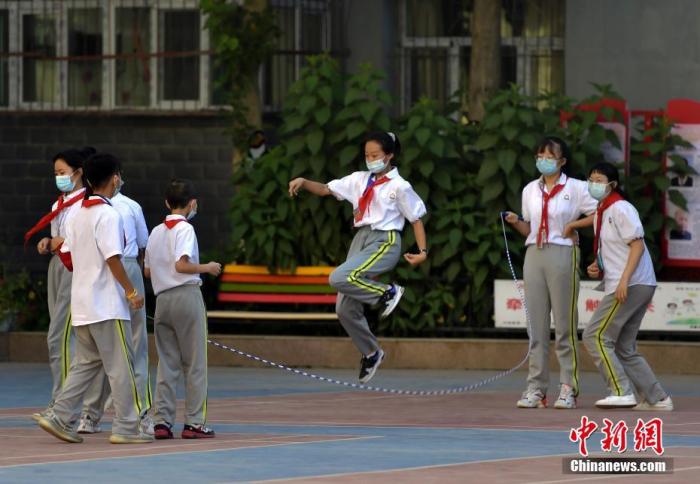 (Observation of the two sessions) From body to mind, how to take care of "youth you" in all aspects?

How to take care of "youth you" in all aspects has also become the concern of the delegates.

"Myopia is showing a trend of younger age, and some children even have myopia before kindergarten." He Wei, member of the National Committee of the Chinese People's Political Consultative Conference and chairman of He's Eye Group, said worriedly that in the age of electronic screens, it is imperative to protect "juvenile eyes".

Data map: After completing their homework, the students skipped rope on the playground and participated in club activities.

In recent years, the myopia rate of Chinese teenagers has remained high, showing a trend of young age and deep myopia.

According to a survey released by the National Health and Medical Commission, the overall myopia rate among Chinese children and adolescents has exceeded 50%.

To prevent youth myopia, Ni Minjing, member of the National Committee of the Chinese People's Political Consultative Conference and deputy director of the Shanghai Municipal Education Commission, believes that the core indicator of myopia rate should be grasped to guide the transformation of social attitudes.

He suggested that the rate of myopia should be taken as an important indicator for the quality assessment of education in schools and regions. Every year, the report on the vision of young people and the rate of myopia in various regions should be published in the mainstream media, and they should be subject to social supervision.

If the standards are not met, school and regional leaders will be severely held accountable.

For young people who are already short-sighted, He Wei proposed that a large national database of electronic files of young people's vision health can be established, and through the empowerment of big data, a network for prevention and control of myopia can be built, and the time of online classes can be reasonably controlled.

He believes that with the implementation of the "double reduction" policy, young people will have more time to participate in outdoor activities, and the time for close-up eye use will be effectively reduced, thus providing sufficient protection for the vision health of Chinese young people in the future.

In addition to physical health, the mental health of adolescents has also received increasing attention.

Kong Weike, member of the National Committee of the Chinese People's Political Consultative Conference and director of the Shandong Academy of Painting, is very concerned about the high incidence of depression among adolescents.

Kong Weik's survey found that due to social cognition, limited professional medical staff, and more physical symptoms than psychological symptoms, only about a quarter of children with depression can be diagnosed and treated in a timely manner.

Depression and depression in adolescents not only seriously affect their physical and mental health, but also easily lead to hidden dangers such as suicide and stressful crimes.

"If depression is well identified, managed, and managed, it creates a strong line of defense against suicide."

Strengthening the construction of mental health services for children and adolescents requires the joint efforts of various parties in the society to make a fist.

Cui Jianmei, deputy to the National People's Congress and secretary of the Party Committee of the Education Group of Bengbu No. 1 Experimental School in Anhui Province, is concerned about another issue closely related to the physical and mental health of young people - juvenile delinquency.

She observed that there are often factors behind juvenile crimes such as lack of guardianship, lack of care, lax discipline, and inadequate protection.

A large number of cases show that juveniles often have bad behaviors or illegal behaviors before committing crimes, and most of these behaviors have not been timely and effectively intervened in the early stage.

Cui Jianmei said that according to the newly revised Juvenile Crime Prevention Law, minors with serious bad behavior can be sent to specialized schools for correctional education.

It is recommended to establish specialized schools in various provinces and cities, and set up specialized education steering committees to educate and correct such minors, so that they can feel cared for, correct their psychological and behavioral deviations, and help them return to society.

How to make juveniles rehabilitated and reintegrated into society more smoothly is also a problem that needs to be considered.

Zhou Yanfang, deputy to the National People's Congress and deputy general manager of Pacific Medical and Health Management Co., Ltd., suggested that the Supreme People's Court, in conjunction with the Supreme People's Procuratorate and the Ministry of Public Security, establish a unified management system for the sealing of juvenile criminal records.

She said that in judicial practice, various units lack uniformity in the operation of the juvenile criminal record sealing system, which is prone to incomplete and untimely sealing of criminal records.

Regulating this will ensure that children who have gone astray will return to society "without barriers".