The Commander-in-Chief of Dubai Police, Lieutenant-General Abdullah Khalifa Al Marri, stated that the new Al Khawaneej Police Station comes within the framework of the Dubai Police General Command's keenness to enhance security coverage at the level of the Emirate of Dubai in all regions, with police stations that provide a high level of services, and are equipped with the services of centers 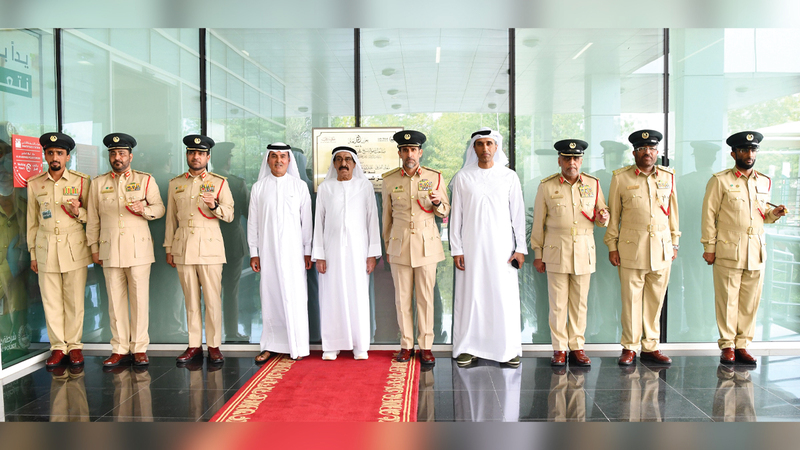 Al Marri during the opening of the new Al Khawaneej Police Station.

The Commander-in-Chief of Dubai Police, Lieutenant-General Abdullah Khalifa Al Marri, stated that the new Al Khawaneej Police Station comes within the framework of the Dubai Police General Command's keenness to enhance security coverage at the level of the Emirate of Dubai in all regions, with police stations that provide a high level of services, and are equipped with the services of smart police stations. "SPS", in order to facilitate and make community members happy, in addition to enhancing the speed of response to emergency incidents.

This came during the opening of the new Al Khawaneej Center, in the presence of the Secretary-General of the Executive Council, Abdullah Mohammed Al Basti, and Chairman of the Board of Directors of Dubai Chambers, Abdulaziz Abdullah Al Ghurair, and Mohammed Juma Al Naboodah.

He stressed the Dubai Police's keenness to keep pace with the expansion and urban development in the emirate with new and modern police stations, which contributes to achieving the force's strategy aimed at providing distinguished security services that delight customers, and instilling a sense of security and safety in all regions of the emirate.

The attendees were briefed on the smart police station (SPS), and the police services that it provides to groups of society in a smart way, without any human intervention, 24 hours a day, in seven languages, including major criminal, traffic and community services, and the ability to submit applications for permits easily and easily, without the need for Go to traditional police stations, and the smart police station “SPS” provides the possibility of registering a criminal report without the need to meet with employees, and direct communication via video with investigative officers who speak several languages.

The attendees were also briefed on the “Daily Brief” hall, which aims to benefit from artificial intelligence programs in combating crime and reducing it, thus contributing to achieving its strategy in making Dubai a safe and happy city, and harnessing technology and modern technical developments in order to develop its cadres and achieve its goals, which was reflected in the The tangible development in performance over many years of continuous and diligent work, and made Dubai Police a role model in professional police work, in addition to developing and updating field work methods based on continuing education, providing distinguished services to customers, and enhancing communication with human resources and the work system, In order to reduce the rate of crime, traffic accidents and deaths resulting from them, and to create a stimulating work environment that encourages the achievement of results, they were also briefed on smart programs and screens that display crimes and hot spots in the jurisdiction.

The Assistant Commander-in-Chief for Criminal Investigation Affairs, Major General Khalil Ibrahim Al Mansouri, confirmed that the Dubai Police General Command is keen, through the Al Khawaneej Police Station, to achieve government trends and implement the Dubai Police strategy, in that Dubai is a "safe city" and the preferred destination for living, residence and tourism globally. Pointing out that the center will provide all services to the residents of the areas in Al Khawaneej in a smart and smooth way in order to make them happy.

He added that the new center is equipped according to the best security standards, and takes into account international standards for modern buildings in terms of smart services, environment-friendly buildings, and green buildings with sound environmental and health specifications, and energy-saving.