The war in Ukraine prompted German Chancellor Olaf Scholz to think a lot last week about his country's post-World War II dogmas, and he turned his attention to his predecessors, who led Germany along a strategic path to Russia, which turned out to be 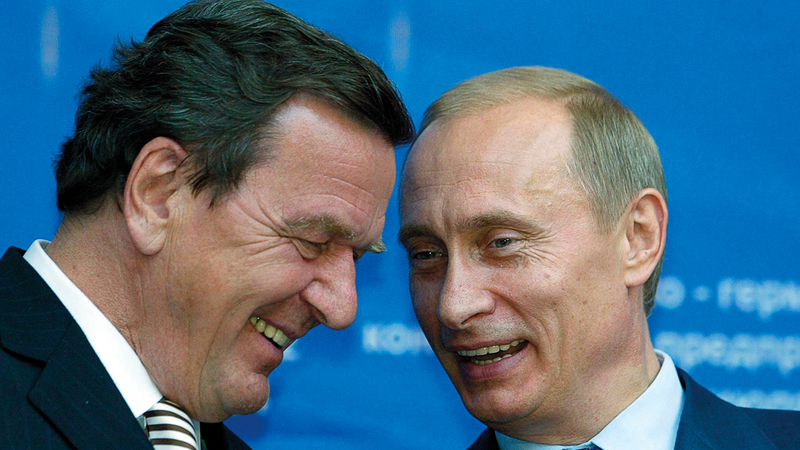 The war in Ukraine prompted German Chancellor Olaf Scholz to think a lot last week about his country's dogmas after World War II, and he turned his attention to his predecessors, who led Germany along a strategic path to Russia, which turned out to be deadlocked, That is why a seismic turn occurred in Germany, when Schulz took a new turn, deviating from the German position on arms exports, announcing huge increases in military spending, and pledging to distance his country from Russian gas.

As a result, some have also begun to dig into the career of former Chancellor Gerhard Schroeder, who showed no regrets about getting his hand at the hands of Russian President Vladimir Putin in the last weeks of his rule to certify the Nord Stream 2 pipeline under the Baltic Sea.

Politicians in Berlin now acknowledge that Germany's growing dependence on Russian energy may have led Putin to believe that Germany would be reluctant to support Western economic sanctions against him.

As a paid lobbyist at energy giant Gazprom, Schroeder has been conspicuously defending his relationship with Russia, even though Schulz has called on his party colleague, and his former boss, to sever ties with Russian state-owned companies.

What is less clear is why Merkel continued Schroeder's path to broadly expanding economic relations with Russia, and whether she did so only out of negativity, or for her own political interest, but when she ended her 16-year term in December, political observers singled out her With some praise for her support of economic sanctions against Putin over his occupation of Crimea, as well as for the rescue efforts she began to treat a poisoned Russian dissident, Alexei Navalny, in a Berlin hospital, these two steps revealed her naiveté with the Kremlin.

And since last week, critics of her have grown louder for her neglect of the advice of foreign and security policy experts, who warned her against making Russia a reliable partner in trade.

"It is too late to assess the German government's misjudgment in its dealings with Russia over the past 16 years," says CDU politician Rodrich Kiswetter, a former officer in the German army.

"It was a big surprise to (NATO) when France and Germany in 2008 objected to Georgia's request to join the alliance, warning that Russia would interpret this as an existential threat to it, but four months later, Russia invaded Georgia anyway."

In 2014-2015, when the United States wanted to arm Ukraine, following Russia's annexation of Crimea, Merkel and then-French President François Hollande opposed such a strategy, instead investing in diplomatic efforts.

But despite such diplomatic efforts, Russia has continued to reinforce its military threat.

There are also questions about Merkel's steadfast support for Nord Stream 2, whose first pipeline was officially opened in 2011.

"Looking at Nord Stream 2, it now appears that the Russian side simply deceived Germany. This was a political and not a commercial project, as Germany believes, and the country has never touched on the European and security dimension of the project," says Keeswetter.

During Merkel's first term, some aspects of the pipeline project could still be interpreted as an arrangement for her to share power with the SPD, which still adopts Schröder's approach, and prime ministers of the center-left state openly sympathetic to Russia in Germany's northeastern states, particularly in Mecklenburg-Vorpommern.

"In her home state and constituency, Nord Stream 2 has always been a very ambitious project," said Claudia Muller, delegate of the Green Party.

And when it comes to Russia, Mecklenburg-Vorpommern is actively managing Russia's shadow diplomacy.

Even after being re-elected in 2009, Merkel supported the continuation and expansion of the pipeline, insisting for years that it was a "purely economic project", though she later admitted that certain "political factors" related to it could not be ignored.

“Economic pragmatism in dealing with Russia was not just a feature of the romanticism of the Social Democrats,” says Jana Puglierin, head of the Berlin office of the European Council on Foreign Relations. On the laws, even after 2014-2015, when alarm bells were ringing, broke the problem into pieces, and did not simply turn it into a political issue.”

And research by Policy Network Analytics, a nonprofit data intelligence network that links policy decisions to strategic economic investments, suggests that Nord Stream 2's political dimension may have been more pronounced for Merkel.

Merkel grew up in northeastern Germany, where she was represented by a constituency covering the Baltic island of Rügen.

In the federal political system, parliamentarians are not expected to amplify their domestic concerns, and the chancellor seems to understand this well.

However, in the summer of 2009, things went wrong, when the Warden Yards shipyard in Schwerin and Rostock filed for bankruptcy.

Six weeks before the country heads to the polls, Merkel's press office announced a breakthrough regarding an imminent rescue of Warden.

At a meeting in Sochi, Merkel and then-Russian President Dmitry Medvedev brokered a deal for Vitaly Yussoufov to buy shipyards, saving half of the company's jobs.

Until then, Yusufov, 29, had worked as the head of the Moscow office of a Russian pipeline company, Nord Stream AG.

His father, Igor, served as Energy Minister during Putin's first term, at the time coordinating Russia's energy cooperation as a special envoy.

"There was a lot of political pressure to bail out Wardane Yard, and it was doubtful that the deal would have gone so quickly," says communications consultant Klaus-Peter Schmidt-Diegoel, who was on the company's advisory board at the time.

Even at that time, there were rumors that the former owner of the insolvent shipyards, Russian investor Andrei Burlakov, was just a Russian mafia man for money laundering, an allegation also made by the Spanish public prosecutor, who is investigating Russian criminals over their activities in Spain (the prosecutor arrested The year in Schwerin in 2012, a criminal investigation into money laundering, due to the lack of cooperation of the Russian side).

"If Burlakov was a corrupt man, he stopped playing that role at some point," Schmidt-Degauel told the Observer newspaper.

However, in September 2011, a hitman shot a Russian investor in a Moscow restaurant.

According to the German statement about the Sochi meeting, Merkel and Medvedev discussed not only the bailout of Warden Yards, but also potential Russian investment in the struggling German carmaker, Opel and microchip maker Infineon.

None of these plans ever worked, much to Moscow's dismay.

However, Russian media reported that the two leaders are likely to also discuss "energy cooperation".

According to Nord Stream AG, planning for the second pipeline began two years later, although its exact origins have not been publicly reported.

"There is no justification for this flagrant violation of international law," Merkel said four days after the start of the Russian invasion, and that "Russia's war of aggression represented a profound turning point in the history of Europe after the end of the Cold War."

• Politicians in Berlin now acknowledge that Germany's increasing dependence on Russian energy may have led Putin to believe that Germany would be reluctant to support Western economic sanctions imposed on him.

• Merkel also believed that through trade Russia could be linked to a multilateral system, and thus a rules-based system, even after 2014-2015, when alarm bells were ringing, she divided the problem into pieces, not simply turning it into a political issue.