China News Service, Hangzhou, March 8 (Reporter Guo Qiyu) The stream is gurgling and the lotus fragrance is faint, that is, Huanxi has arrived. Huanxi is Huanxi Village, Jiangnan Town, Tonglu County, Hangzhou City, Zhejiang Province. This is the birthplace of the Three Kingdoms culture. The two clear streams of Tianziyuan and Qingyuan converge at the entrance of the village, hence the name Huanx 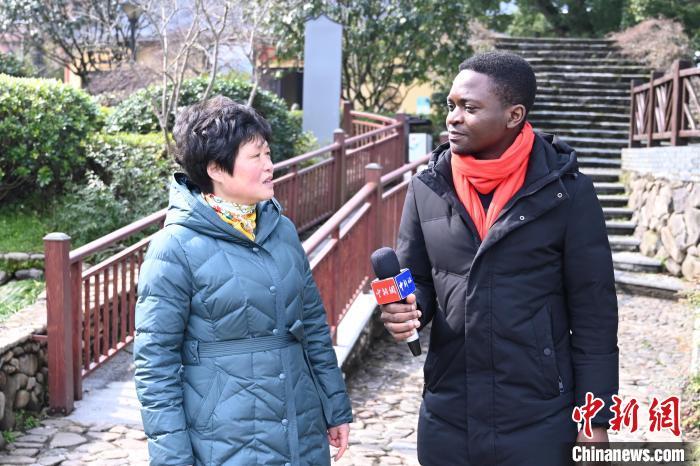 China News Service, Hangzhou, March 8 (Reporter Guo Qiyu) The stream is gurgling and the lotus fragrance is faint, that is, Huanxi has arrived.

This is the birthplace of the Three Kingdoms culture. The two clear streams of Tianziyuan and Qingyuan converge at the entrance of the village, hence the name Huanxi.

Zhou Zhonglian, deputy to the National People's Congress, is the deputy secretary of the General Party Branch of Huanxi Village.

This is an ordinary village in Jiangnan Town, Tonglu: 12.18 square kilometers, with a population of more than 2,000. People mainly with the surname Zhou have lived on this land surrounded by mountains and rivers, and have gone through more than 600 years so far.

This is a legend of the revitalization of China's vast rural areas: from the backward living environment of the villagers to the first batch of beautiful and livable demonstration villages by the Ministry of Housing and Urban-Rural Development; from the "hollow village" where the farmland is barren and young people flee, to the lotus culture as the core, one, two, three The "net red village" of integrated development of production...

Recently, the "Foreign Anchors Watching the Two Sessions" column of China News Agency and China News Network specially invited Wang Defu (Chinese name), a Congolese student studying and living in China, to talk to Zhou Zhonglian and visit Huanxi Village to learn about this refreshing, clean and culturally How did the charming Jiangnan ancient village embark on the road of revitalizing the butterfly change?

Wang Defu: As the Qiantang River reaches Tonglu, the water is not as good as the mountains and green paintings.

My current location is Huanxi Village, Tonglu County. The scenery of the village we came to today is very beautiful. Next, let me show you what kind of historical and cultural heritage Huanxi Village has?

Our Huanxi Village is the residence of the 14th generation grandson of Zhou Dunyi, the great philosopher of the Northern Song Dynasty and the originator of Neo-Confucianism. It has a history of more than 620 years.

There are 2,098 villagers and 658 households with the surname Zhou. "Love Lotus" is one of Zhou Dunyi's representative works. Many villagers have the word "Lian" in their names.

Therefore, the brand we have focused on building in recent years is "Qinglian Huanxi", exploring "lotus culture" and doing a good job in "lotus economy".

The whole village is like a big lotus pond, attracting many tourists to appreciate, taste and think of lotus.

"Lotus" is not only an agricultural industry in Huanxi, but also a tourism product, which drives the development of the entire farmhouse.

In the early stage of construction, we firmly grasped the "ecology" to build, and did not let go of the "ecology", and transformed the ecology into productive forces. A beautiful environment has created a beautiful economy.

Wang Defu: So the entire Huanxi Village can also be regarded as a tourist attraction?

Yes, the entire Jiangnan ancient village is a national 4A scenic spot.

We closely focus on polishing the golden signboard of the ancient villages in the south of the Yangtze River, highlight the cultural connotation of each village, continuously activate the endogenous development momentum, continue to enhance the radiation driving ability, and build the five villages into a common prosperity complex.

Special "foreign anchor" Wang Defu visited the ancient villages in the south of the Yangtze River in Tonglu.

The ancient villages in the south of the Yangtze River are very advantageous to build a common prosperity complex.

Relying on the first-mover advantage of national 4A-level scenic spots, we take the five administrative villages of the ancient villages in the south of the Yangtze River as the regional scope, and highlight the concept of "home" to create a common wealth complex.

Specifically, it is based on the existing resource characteristics of each village, relying on modern rural industry, to create a beautiful environment, a civilized rural style, a prosperous industry, a harmonious neighborhood, and a common wealth and beauty, integrating interactive experience, vacation life, and intelligent services. An integrated "complex and diverse community community" to create a common prosperity complex from multiple dimensions such as economy, society, ecology, culture, civilization, and people's livelihood.

For example, in terms of promoting rural tourism with culture, we have designed an ancient village route and carried out unified planning and design.

With the goal of "seeking common wealth in the whole area of ​​ancient villages", the Jiangnan Ancient Village Common Wealth Consortium aims to increase the per capita disposable income of farmers to more than 73,000 yuan by 2025, and reduce the income ratio of urban and rural residents to less than 1.61.

A scene of an ancient village in the south of the Yangtze River in Tonglu.

Wang Defu: For example, there are many shops next to Shen'ao Ancient Street where we are now. I know this was an ancient village before, so how did it become like this?

Actually, the entire Shenao Village is a national-level historical and cultural village and an ancient building complex.

In this way, on the one hand, the common people have benefited, and on the other hand, the traditional culture has been inherited.

There are "hundreds of people and one hundred craftsmen" in the entire Shen'ao Ancient Street, and each shop has its substantive connotation.

In the next spring, when the flowers bloom, the tourists will be very strong.

In this way, local villagers can not only get rent, but also work here, not only using their assets and resources, but also protecting the ancient villages.