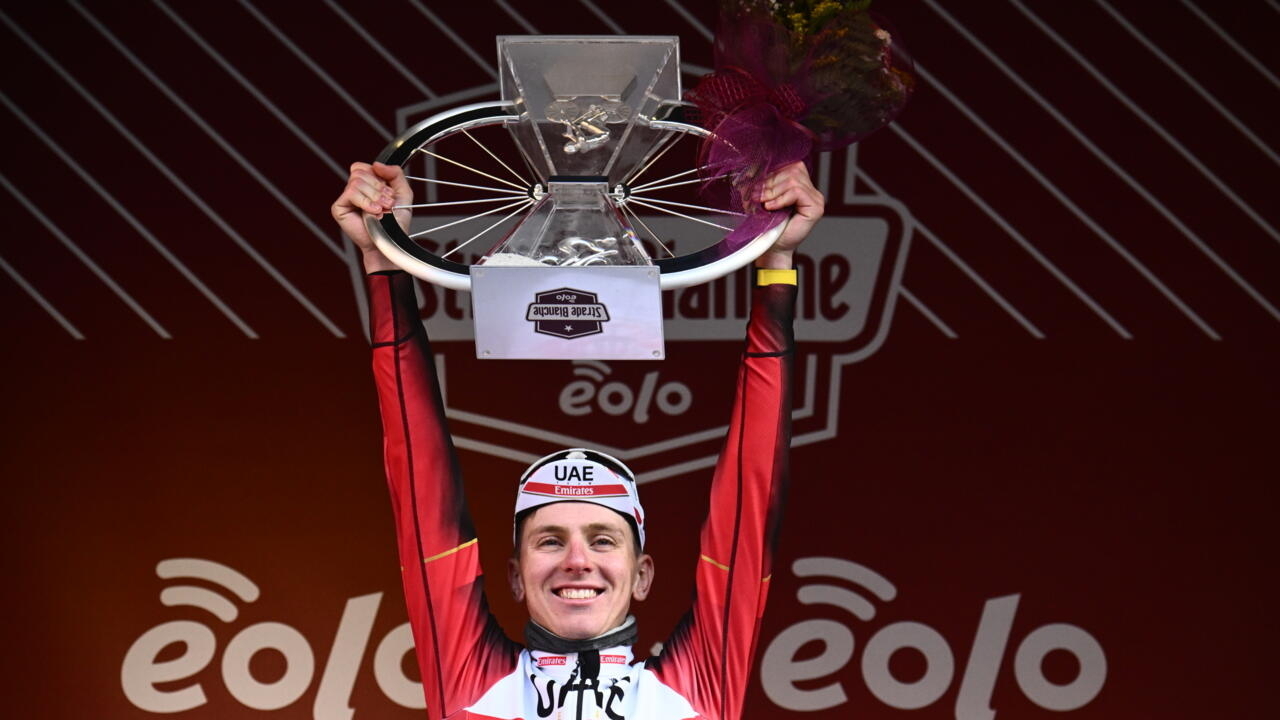 Irresistible on the gravel roads of the Tuscan race, Pogacar is postulating a second success in the "race of the two seas", a year after its victorious debut.

With the best chances of obtaining it in a test that links the Thyrrenian Sea to the Adriatic over seven days and begins with an individual time trial in Lido di Camaiore, the only one on the program.

Slovenian Tadej Pogacar, winner of the Strade Bianche, during his solo breakaway of more than 50 km, on March 5, 2022 around Siena Marco BERTORELLO AFP

Evenepoel, who has excelled in week-long races so far, faces the Slovenian in this setting for the first time.

The match promises to start, in the time of 13.9 kilometers that the Belgian approaches with the advantage of freshness compared to Pogacar and the other competitors of the trying Strade Bianche.

In particular the world champion Julian Alaphilippe, who complained of his back on Saturday evening after his spectacular fall.

Belgian Remco Evenepoel, during the time trial between Knokke-Heist and Bruges, at the World Cycling Championships, September 19, 2021 DAVID STOCKMAN Belga/AFP

The 22-year-old Belgian, who teams up with Alaphilippe, looked impressive in the recent Tour of Algarve time trial in Portugal.

For him, the challenge is to put on the leader's jersey from his debut in Tirreno-Adriatico, the Italian counterpart of Paris-Nice on the WorldTour calendar.

The race has given up summit finishes this year.

But the double ascent of Mont Carpegna (6 km at 9.9% on average with a passage of 15%) promises to be decisive for the general classification, during the 6th and penultimate stage, in a place which is experiencing a victory memorable by Eddy Merckx during the Tour of Italy 1973.

For climbers, this is the main event of the week.

Mainly for the Olympic champion, the Ecuadorian Richard Carapaz, at the head of a team which is also betting on the Italian Filippo Ganna in the opening time trial, but also the Colombian Miguel Angel Lopez and the Spaniard Enric Mas.

Ecuadorian Richard Carapaz soars to the Olympic title, during the road race at the Tokyo 2020 Games, July 24, 2021 on the Oyama circuit Tim de Waele POOL/AFP/Archives

Three stages (2nd, 3rd and 7th) are intended for sprinters, a category in which the Australian Caleb Ewan and the Briton Mark Cavendish emerge.

In the French camp, the chances have diminished due to the injury of Alaphilippe and the health problems of Romain Bardet, package Saturday for the Strade Bianche.

On the other hand, Thibaut Pinot is present as is Warren Barguil, who came as a neophyte, and the sprinters Arnaud Démare and Nacer Bouhanni.

"Physically, I feel good," says Démare, who has yet to win this season.

"Now it has to translate into results."