Davis Cup: the Blues in the final phase, perhaps at home

The Blues qualified on Saturday in Pau for the final phase of the Davis Cup 2022 by beating Ecuador in front of an audience and with renewed enthusiasm, and hope to play the phase again at home… 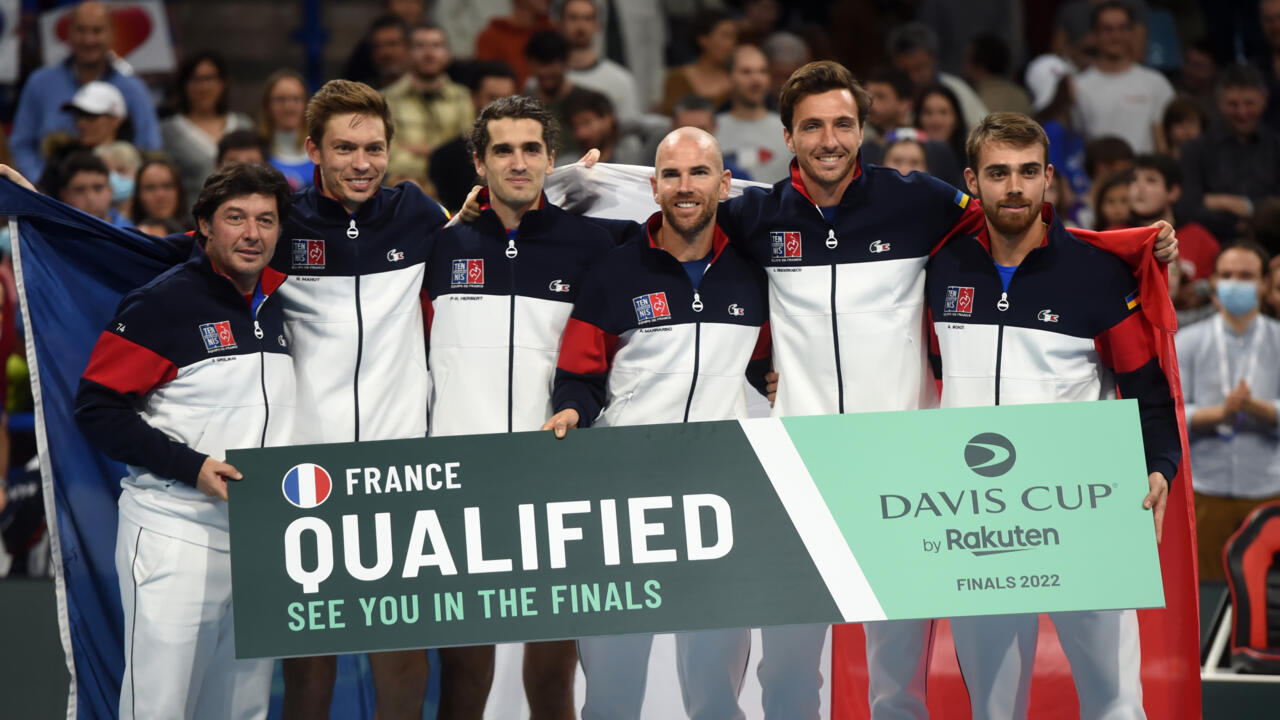 The day after the victories of Arthur Rinderknech and Adrian Mannarino in the first two singles, Nicolas Mahut and Pierre-Hugues Herbert concluded by winning the doubles against Gonzalo Escobar and Diego Hidalgo (6-3, 7-5).

The French pair Pierre-Hugues Herbert (g) and Nicolas Mahut after their victory in the doubles against Ecuador in the Davis Cup, March 5, 2022 in Pau GAIZKA IROZ AFP

"Even if it's 3-0, and 4-0 with Benjamin's match (Bonzi, who celebrated his first selection in the Davis Cup by winning 6-0, 6-2 against Antonio Cayetano March in a match without stake, editor's note), the matches were hung. We really respected the Ecuadorians, we prepared well so as not to have any bad surprises. It was the desired result. There are the victories, the state of "spirit, the atmosphere. Everything is positive about this weekend in Pau!", welcomed the captain Sébastien Grosjean.

The captain of the French tennis team Sébastien Grosjean congratulates Nicolas Mahut (g) and Pierre-Huges Herbert, during the qualifying match for the Davis Cup against Ecuador, on March 5, 2022 at the Palais de Sports de Pau GAIZKA IROZ AFP

The Blues won all the matches of this meeting, but with less ease than the chasm in the ATP rankings which separated them from their opponents, including player N.1 Emilio Gomez, who is ranked 144th in the world, could have predicted.

"When you're ultra-favorites and everyone expects you to win, you have to do it! I'm proud of the team. I don't think we've played our best tennis all along. of the weekend, but we had an irreproachable attitude", noted Herbert.

Together with Mahut, they are one of the best doubles teams in the world, but their victory on Saturday was not easy either.

The French were however able to count on their supporters.

On Saturday, there were nearly 4,000 pushing loudly behind their players.

“The public played its role, welcomed Mahut. When we are led by a break in the 2nd set, he is there, we break straight away. We feel the fervor of the public and if we feel it, the opponents too. This is also the Davis Cup".

"There was a great atmosphere, we had the impression of rediscovering the great hours of the Davis Cup. Emotion, tension, sharing with people, that's why we are preparing. I had been preparing for a very long time. hadn't felt that in the Davis Cup!", added Herbert.

In France in September?

Also, Mahut did not hide his hope of "relive such moments in September" for the group stage which will bring together the 16 nations qualified for the final phase of the competition.

His wish could be granted since the president of the French Tennis Federation (FFT) Gilles Moretton announced on Saturday that France was going to apply for the organization of matches in this group phase (September 14-18).

"I signed barely a quarter of an hour ago to receive the specifications for this new phase within the framework of the Davis Cup", he underlined.

The president of the French Tennis Federation Gilles Moretton, during a photo session, March 31, 2021 in Paris JOEL SAGET AFP / Archives

In yet another format change since 2019, the 2022 Davis Cup finals have been split into a group stage consisting of sixteen teams divided into four groups of four in four cities to be determined.

It is for the reception of these matches that France will apply.

The distribution of the sixteen nations that will play this group stage will be made on March 24, said Moretton.

Twelve teams, including France, passed Friday and Saturday through a qualifying round, to join Croatia, finalist last year and automatically qualified, as well as Serbia and Great Britain invited.

Russia, holders of the title, have been excluded until further notice by the International Federation (ITF), following the invasion of Ukraine.

The first two of each group will then meet in a single city for a knockout phase (November 23 to 27), from the quarter-finals to the final.

Moretton hinted that this "final 8" would take place in Abu Dhabi.