I voted against Russia after it abstained twice.. Why did the UAE's position change on the war in Ukraine?

Twice, the UAE abstained from voting in favor of a UN resolution calling on Russia to stop its military operations in Ukraine, which has entered its seventh day. 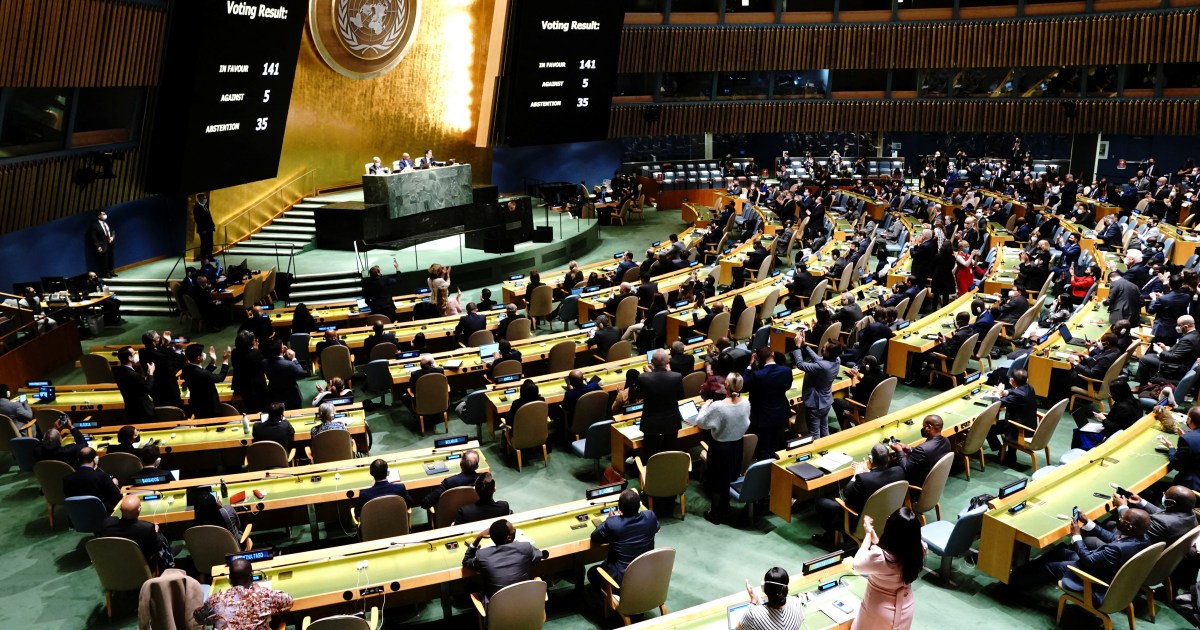 Twice, the UAE abstained from voting in favor of a UN resolution calling on Russia to stop its military operations in Ukraine, which has entered its seventh day, but Abu Dhabi changed its position on Wednesday and voted in favor of a resolution adopted by the United Nations Assembly, calling on Russia to stop its war in Ukraine.

The resolution of the General Assembly was supported by 141 countries, and Russia, Belarus, North Korea, Eritrea and Syria voted against it, while 35 countries abstained, including China and 3 Arab countries, Iraq, Sudan and Algeria.

The resolution - which was issued after more than two days of interventions - demands that Moscow "immediately, completely and unconditionally withdraw all its military forces" from Ukraine, and "condemns Russia's decision to increase the state of readiness of its nuclear forces."

And it "denounces" the resolution put forward by the European Union in coordination with Ukraine, "in the strongest terms" of the Russian aggression against Ukraine, and affirms "adherence to the sovereignty, independence and territorial integrity" of Ukraine, including its "territorial waters."

It was noticeable from the beginning that the UAE adopted a position different from that of America and its allies in the West and the Middle East.

Two days ago, a European diplomat stated that Westerners were "very disappointed by the UAE's abstention from voting twice, Friday and Sunday, during the vote on Security Council resolutions related to the war in Ukraine."

The diplomat said that the UAE was aiming from this position to make Russia stop vetoing a resolution extending the arms embargo imposed on the Houthis in Yemen.

The UAE is part of a Western-backed Arab coalition fighting the Iranian-backed Yemeni Houthi movement, which has close ties with Russia.

"We are very upset with the UAE, and we are convinced that they made a dirty deal with Russia" linked to the Houthis and Ukraine, the European diplomat added.

In the same context, the axios website quoted Israeli and Emirati sources as saying that the UAE was disappointed with Washington's response to the Houthi attack on Abu Dhabi six weeks ago.

These sources explained that this frustration is what prompted Abu Dhabi to abstain from voting in favor of the resolution behind Washington, which calls for an end to the Russian war in Ukraine.

The UAE's vote in favor of the General Assembly's decision today seemed remarkable compared to its position on last Friday and Sunday, which raised questions about the reasons for this change in the UAE position.

Last Monday, the UN Security Council issued - with the support of the UAE - a resolution extending the ban on the delivery of weapons to Yemen to include all Houthi militants, after it was limited to specific individuals and companies.

The resolution - in which 11 countries voted, while 4 abstained - Norway, Mexico, Brazil and Ireland - considered the Houthis a "terrorist group", for the first time.

Diplomats interpreted Russia's vote - close to Iran, which supports the Houthis - in favor of the resolution as the result of an "agreement" between Moscow and Abu Dhabi, through which Moscow aimed to ensure that the UAE abstained from voting in the Security Council against the Russian war on Ukraine last Thursday.