The new directors of the Court of Accounts at the proposal of the PSOE, Rosario García Álvarez and Diego Íñiguez, opted yesterday, Monday, for the decision to save the... 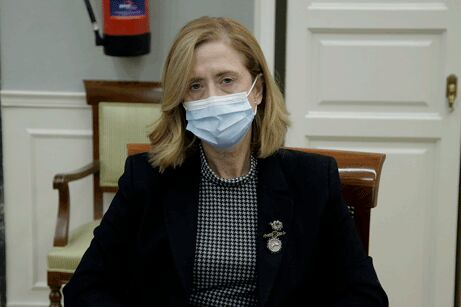 The new directors of the Court of Accounts at the proposal of the PSOE,

, opted yesterday for the decision to save the independence leaders accused of embezzlement from the embargo.

Both prevailed in the

the supervisory body against the president,

, appointed at the proposal of the PP, and accepted the controversial endorsement of the Generalitat of Catalonia.

Her order supposes revoking the initial decision of the investigating delegate

who, with the support of the previous Court of Auditors -in which the PP had a majority- decided to reject the endorsement as illegal.

The new directors thus set the precedent that a public entity harmed by embezzlement can guarantee those accused of perpetrating that damage to its public coffers.

Thanks to this decision, some thirty pro-independence leaders will be able to avail themselves of the guarantee of 5.4 million from the Generalitat and avoid the preventive seizure of their assets.

The Court of Accounts informed that, in view of the vote, the president of the room will not be in charge of drafting the order, but the counselor responsible for the First Department of Prosecution Rosario García Álvarez.

This and Íñiguez, who was until last year chief of staff of the Minister of Defense, Margarita Robles, are in favor of accepting the appeal of the independence leaders, who alleged "defenselessness."

There is no recourse against his decision.

Law on the Operation

of the Court of Accounts only allows the revocation of a decision of the investigating delegate for not having completed "proceedings" or in cases in which "defencelessness is caused".

Given that the endorsement of the Generalitat has nothing to do with the proceedings of the investigation, the alleged "defenselessness" that Artur Mas, Carles Puigdemont, Oriol Junqueras and the rest of the prosecuted independentistas would suffer, would be the reason why they accept that the endorsement covers them launched by the Generalitat of Catalonia last year with great controversy.

It was implemented by the

The investigating delegate knocked down this public support on October 14 "by not protecting malicious behavior or marked by acts carried out with negligence or gross negligence, requirements that must necessarily be met to declare the alleged accounting responsibility and that, in an indicative manner, the Delegate Instructor must appreciate in order to declare the existence of an alleged accounting liability and give rise to a positive provisional settlement.

So she reported it then.

He clung to the fact that a section of the decree of the Generalitat made it clear that the guarantee would not have effect if the favored officials ended up being firmly convicted of fraud or gross negligence.

The investigating delegate had to act without a report from the

, which declined to pronounce itself, despite the fact that the Court of Auditors asked for its opinion.

The current oxygen balloon for the independentistas constitutes the first controversial decision of the new Court of Auditors, which went from having a majority of councilors from the PP to another from the PSOE after a renewal agreement last autumn between the Minister of the Presidency, Félix Bolaños, and the then general secretary of the Popular Party, Teodoro García Egea.

By accepting the guarantee, the Court of Auditors gives a first sign of softening with the independentistas that can continue in the prosecution of the case, which has not yet begun.

For the time being, the State Attorney has declined to file a complaint against the defendants in the face of previous precedents, arguing that the affected public entity is not the Ministry of Finance, but the Catalan Generalitat.

And this, for its part, also declines to denounce the embezzlers because it maintains that the expenses abroad and in the October 1 referendum did not harm its public coffers.

The Court of Auditors assesses the embezzlement in both cases at more than nine million euros.

The president of the Generalitat, Pere Aragonès, welcomed the decision of the Court of Auditors and his party, Esquerra, said in a statement that he is waiting to see if "this modification of the abusive criteria applied to date is punctual or if it will also be reflected in future resolutions».

For his part, the general secretary of Junts per Catalunya, Jordi Sanchez, stressed that the decision is the result of "discreet work" without clarifying what discreet work the Government has carried out with the Government or the Court.