Gazan youth seek to learn Hebrew to work in Israel

Inside a well-lit room, a teacher stood training students to spell Hebrew words on a whiteboard. Young Maher al-Farra and dozens of other Palestinians watched attentively, hoping to take advantage of the opening of employment opportunities in Israel. Demand for the Rafha Center increased 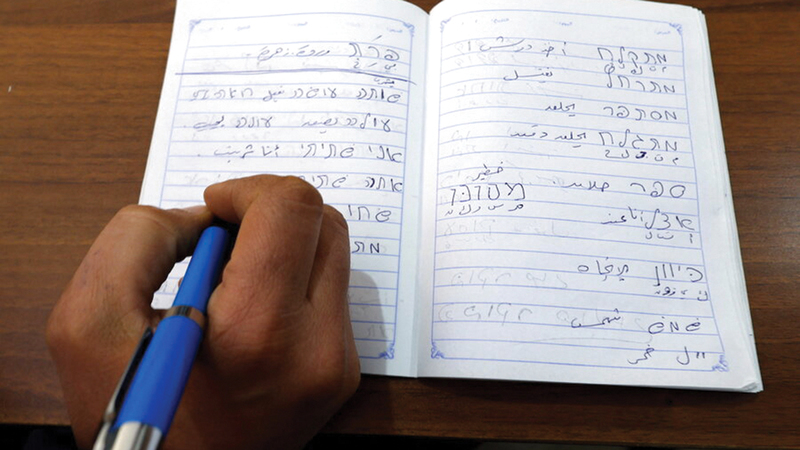 Gazan youth seek to learn Hebrew to work in Israel

Inside a well-lit room, a teacher stood training students to spell Hebrew words on a whiteboard. Young Maher al-Farra and dozens of other Palestinians watched attentively, hoping to take advantage of opening employment opportunities in Israel.

The demand for the Rafha Language Center has increased due to new job offers that Israel allowed at a time when it is working to calm tensions on the border, following an 11-day war in May with the Hamas movement, which rules the Gaza Strip.

Israel now offers 10,000 work permits that allow Gazans to cross the border to work in Israel, a new source of income in a region where about 64% of the population lives below the poverty line, while the unemployment rate is as high as 50%.

Ahmed Al-Fulait, owner of the language center, said that the number of people registered with him to learn the Hebrew language has increased fourfold, now reaching 160 students for each level, since Israel began providing work licenses in the last quarter of 2021. “These language courses make any A person who obtains a work permit in Israel is able to read signs and documents written in Hebrew, as well as communicate with soldiers at Israeli checkpoints.

And if one of the employers speaks only Hebrew, these language courses will enable any Gazan worker to deal with him.”

About 2.3 million Gazans live in a narrow coastal strip, and they are unable to leave the Strip in search of work abroad. They have been imprisoned for 15 years in the Strip under restrictions imposed by Israel, which has fought four wars with Hamas and other Palestinian armed groups since 2008. Before the Intifada In 2000, about 130,000 Gazans were working in Israel, and the Palestinians said that Israel had banned them from entering the border since 2005 after the withdrawal of the US army and settlers from the Gaza Strip.

A week's fare in a day

The cautious increase in the number of work permits is not expected to end the long-running conflict between Israel and Hamas, which have fought four wars between them since Hamas took control of Gaza in 2007. Rafha.” The change in the Israeli position would change the future of their earnings. In Israel, daily wages reach the same amount that a worker gets in a week in Gaza.

"I came here to learn Hebrew so that I can easily handle matters in my work inside (Israel)," the student, Al-Farra, who is learning Hebrew, told Reuters. "The new job opportunities will improve the economic situation," said Israeli liaison officer, Colonel Moshe Tetro. In Gaza, it can calm the security situation.”

Senior Hamas leader Issam Alis said Israel could eventually offer about 30,000 work permits, which economists say would allow workers to earn about 500 shekels ($156 per day), which is equivalent to what some earned from working in Gaza during the past decade. week.

"Every week I come back to my family happy, and I carry 2,000 shekels ($625) and I will help my mother and father," said Jamal Abdullah from Jabalia, in the northern Gaza Strip.

The Ghazzawi economist, Muhammad Abu Ayoub, indicated that the offer of work permits submitted by Israel is one of the serious economic steps that were agreed upon under a political settlement mediated by Egypt and Qatar and mediators from the United Nations, following the war that took place last May.

"These are not unilateral Israeli initiatives," he added.

Israel linked more openness to the improvement in the security situation following the May war, and accused Hamas of investing in building its combat capabilities instead of solving the humanitarian problems facing Gaza.

Colonel Tetro said, "If the security situation remains stable and calm, Israel will increase its openness to the Gazans more and more."

• Daily wages in Israel are about what a worker gets in Gaza in a week.

• The offer of work permits presented by Israel is one of the serious economic steps that were agreed upon under a political settlement brokered by Egypt, Qatar and UN mediators, following the war that took place last May.