They whispered in the ear and closed the camera: how they conduct exams for migrants on Russian language proficiency

Labor migrants in Russia are required to know the Russian language. However, many are able to communicate at work only with fellow countrymen. And these are not only illegal immigrants, but also holders of patents and temporary residence permits. For the sake of experiment, RT sent a visitor for testing, who did not know Russian at all. Read about how he received the certificate in the report of special correspondent Alexei Boyarsky. 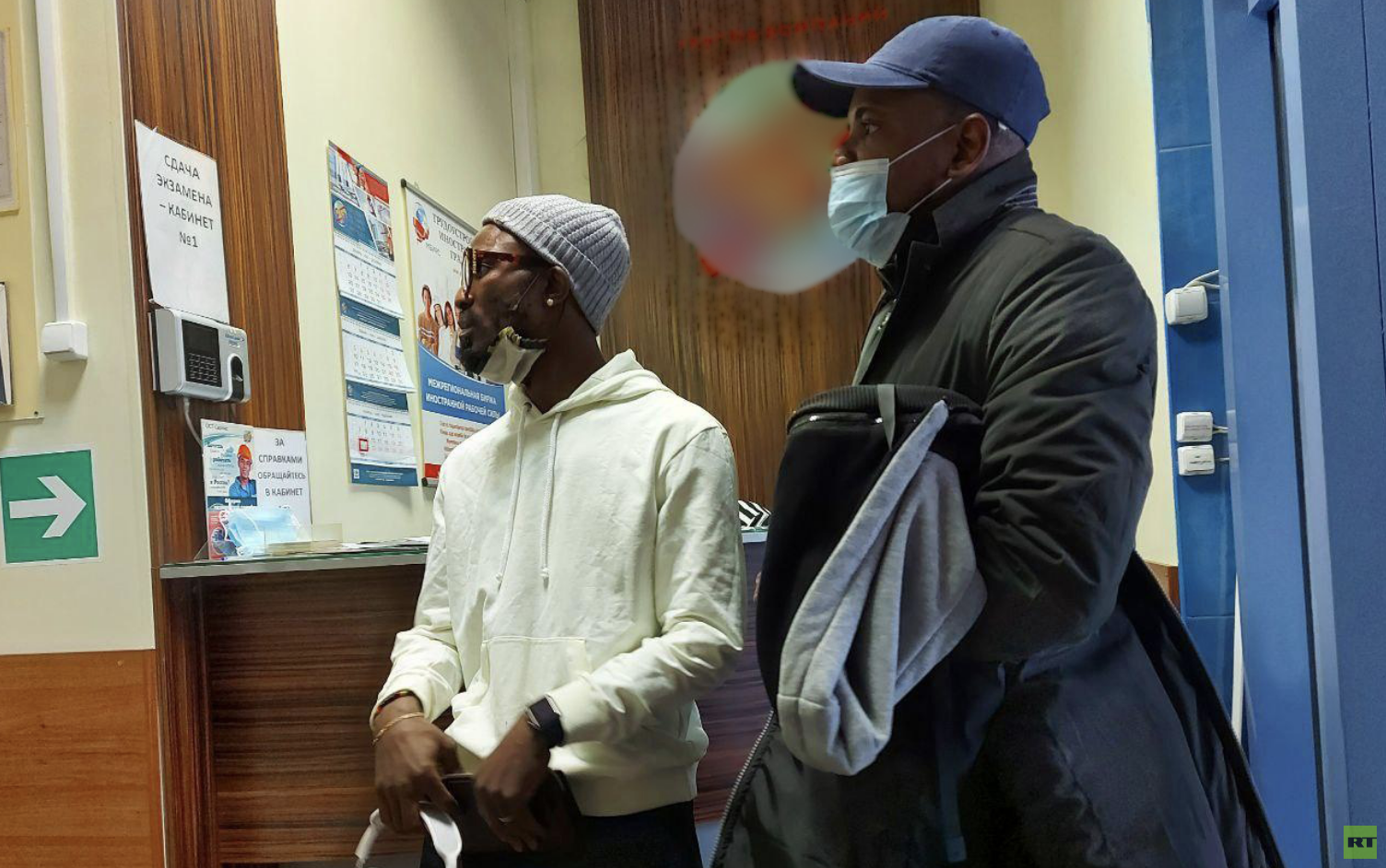 These are the requirements of the law.

It is necessary to be able not only to speak, understand what is said, but also to read and write.

To obtain a patent, an elementary level is sufficient.

The recipient of a residence permit must speak the language so fluently that he can independently negotiate on solving an everyday problem of any complexity, write a request to a state institution.

At the same time, learn the basics of Russian legislation - be able to operate with them in Russian.

Testing of this knowledge is carried out by licensed training centers: they examine and issue appropriate certificates.

However, a significant part of guest workers do not speak Russian even at the “patent level”.

And this is not only about illegal migrants living and working in Russia without proper registration - often those who have received a patent or RWP do not know the language.

At the Prokshino station of the Moscow metro, the signs are duplicated in Uzbek and Tajik: buses run from this station to the Sakharovo migration multifunctional center.

At first glance, it is quite logical: people should be comfortable.

But here you need to remember that the same patents, RVP, residence permit and citizenship go to the migration center - clients have a certificate of knowledge of the Russian language.

Where did you get the certificate?

- asked the governor of the Kaluga region, Vladislav Shapsha, at the local migration center, who was applying for a patent.

The bearer had a certificate of knowledge of the Russian language, but only in Russian, as Shapsha noted, “not a belmes”.

“There were plenty of them in the migration center.

In general, it seemed to me that the number of people who speak Russian is limited exactly to the employees of the migration center, ”Vladislav Shapsha commented on the current situation in an interview with RT.

The governor came on an excursion to the migration center clearly prepared - he even knew the fee: 5 thousand rubles for a fake exam.

Also on russian.rt.com We came to stay forever: why in the Kaluga region they want to limit the migration influx

“You can neither be nor me, but it is more expensive”

Most readers have either experienced it firsthand or have some idea of ​​driving or passing vehicle inspections.

The fight against corruption has significantly complicated the previous schemes for buying rights or a diagnostic card.

But it didn't liquidate.

It is logical that certificates of knowledge of the Russian language are bought in the same way.

To begin with, I called one of the testing centers in the Kaluga region itself.

I said that I want to arrange an exam for my employees from Tajikistan.

“We are not testing for a certificate at the moment, it’s better for you to take exams at the Kaluga MFC itself.

And get a certificate from them,” the employee explained to me.

She had in mind the verification by the Kaluga prosecutor's office of the system for issuing certificates - it began after Shapsha's visit to the MFC.

In the course of further conversation, it became clear that the moratorium on testing at this center does not apply to everyone.

“If your employees really speak the language and you are confident in them, then please let them come - we will take the exam, we will give a certificate,” the interlocutor agreed.

But according to legend, my friends from Tajikistan do not know Russian at all, so I had to look for another place.

“How to pass an exam to a person who does not speak Russian at all?

Our manager will explain everything to you in detail, ”I found such an advertisement on the website of the capital center.

According to the stated information, it operates under a license, has an office in the center of Moscow, and has a branch in St. Petersburg.

The office is solid.

They wrote down my number, and a few minutes later they contacted me via WhatsApp.

To begin with, I clarified whether it is possible not to come to the exam at all: pay and receive certificates with home delivery.

“This has long been impossible - the whole process is recorded on camera, then they check,” the answer came to me in correspondence with an anonymous person on WhatsApp.

But they reassured me: “If they don’t care at all, then we will help.

But it will be more expensive."

About the written part, they explained that this was “not a problem at all.”

And about oral - that they will send a question in advance.

To which the camera must answer in Russian: "Let them learn the answer at home."

"We speak our native language"

To conduct the experiment, we found Adylbek, a citizen of Kyrgyzstan, 20 years old.

In Moscow only two months.

He doesn't speak Russian at all.

Well, except for “hello” and “thank you”.

He understands Russian speech rather intuitively, which, however, does not prevent him from working as a courier.

“I look at the way to the client in the navigator on the smartphone, you just need to leave the order and smile at the client.

You don’t even need to count the money - everything is cashless.

And inside the delivery service itself, I work with the Kyrgyz - we communicate in our native language, ”Adylbek explained to me through an interpreter, his friend.

Actually, I had to take a friend to the exam - someone should explain to Adylbek the actions in front of the tracking camera and other operations.

Kyrgyzstan is a member of the EAEU.

Its citizens have the right to work in Russia without a patent.

Therefore, we applied for an exam in the Russian language for applicants for a residence permit.

At the IMC Sakharovo, such testing costs 3.5 thousand rubles.

But there, apparently, you need to register in advance.

And here is the city center, on foot from the metro, without a queue at any time.

A list of questions for written and oral assignments was sent to me.

I looked, and it became obvious: Adylbek could not cope with them.

“I don’t know how to ask in Russian”

Among those waiting in the corridor of the testing center, many spoke Russian among themselves.

For example, a couple of young guys with an oriental appearance are most likely students.

And for others, as I understand it, it is just native: people from Transnistria, from Ukraine took the test in my presence.

Even the Africans answered the center's staff in Russian.

But there were also those with whom the administrators communicated in ... their native languages.

"Learned the answer at home?"

- walking along the corridor, in Russian, one of the administrators asked some man who had arrived for the exam.

It turned out that we could not take Nurislam with us - at least a couple of the center's administrators spoke Kyrgyz.

Later it became clear that Uzbek and Tajik speakers were also working nearby.

To begin with, the administrators themselves tested Adylbek.

They asked in Russian to name the age, first name and patronymic.

Adylbek gave his name and age, but he could not give his patronymic.

Employees were satisfied with this level of knowledge.

But there are clients who cannot be led through the “help” technology.

In particular, those who do not know how to write in their native language.

Even if you do not know how to drive a car, under the camera you need to sit in the driver's seat, start the engine and move off.

And even the most corrupt traffic cop will not be able to do this for you.

The written exam had 36 questions to answer.

Somewhere choose the correct answer from those offered.

And in other paragraphs, write with your own hand a couple of sentences - to explain the actions in a given life situation.

Adylbek does not know how to read and write in Russian at all.

And with my own hand!

An employee of the center stood next to him and dictated to him in Kyrgyz what to write.

In some places, not even individual words that are hard to reproduce by ear, but just letters.

In Kyrgyzstan, the Cyrillic alphabet - Adylbek has no problems with writing Russian letters.

And so that it was not visible on the camera how she leans towards his ear, she simply covers it with her back - supposedly she just stands next to the examinee.

Of the eight people who took the exam in that audience, three more were prompted in the ear: one Kyrgyz and two Tajiks.

“In the middle of the exam, my ballpoint pen stopped writing,” Adylbek later shared his impressions.

And in Kyrgyz I was afraid.

The oral exam was even easier.

Adylbek was asked to give the name of his best friend, to say where he met him.

We learned the first phrase of the answer with Adylbek.

Turned on the camera.

The camera was turned off.

They turned it on again, Adylbek spoke again.

We left the certificate to Adylbek as a keepsake - when he learns the language, he will be able to read it himself.