The "Black Prison Network" was exposed to the World-American-style human rights taint, and there is iron evidence

The "Black Prison Network" was exposed to the World-American-style human rights taint, and there is iron evidence The picture shows the exterior of Camp Delta at the US military base in Guantanamo, Cuba. Xinhua News Agency   □ Wang Yitong   Recently, the 20th anniversary of the establishment of Guantanamo Prison and the news that the Lithuanian government plans to sell the "black prison" real 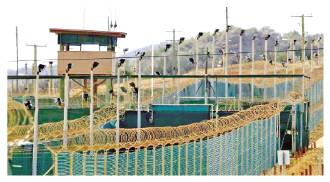 The "Black Prison Network" was exposed to the World-American-style human rights taint, and there is iron evidence

The picture shows the exterior of Camp Delta at the US military base in Guantanamo, Cuba.

Recently, the 20th anniversary of the establishment of Guantanamo Prison and the news that the Lithuanian government plans to sell the "black prison" real estate on the outskirts of the capital has once again exposed the "black prison network" in the United States to the world.

International public opinion believes that the "black prisons" of the United States around the world have long become a classic symbol of American-style trampling on the rule of law and human rights violations.

These "black jails" are a huge irony against American politicians' claim to "human rights", and expose the hypocrisy of the American "double standard of human rights".

This year marks the 20th anniversary of Guantanamo Prison.

Twenty years ago, the United States set up a prison at the Guantanamo Naval Base in Cuba to hold suspects captured by the US military in global anti-terrorism operations after the "9.11" terrorist attack.

Guantanamo has been condemned over the years for its many torture scandals, and despite repeated promises by multiple U.S. presidents to close it, it has so far remained empty talk.

It is reported that since the first batch of prisoners were sent to Guantanamo Bay in 2002, the prison has held a total of about 780 prisoners, of which hundreds have been acquitted, some have been transferred to third countries, and 39 still remain Imprisoned within the walls of this prison.

Between 2002 and 2021, nine detainees died in custody without being charged or convicted.

Berg, a Pakistani-British man who spent two years in prison in Guantanamo, told the media about his and his fellow prisoners' painful experiences of being tortured, interrogated, beaten, kicked, and waterboarded. Vicious torture is being held without knowing the crime, without charge, without trial, but at the highest price for personal liberty."

According to the British "Independent" report, in order to avoid the responsibility of the American judicial system, Guantanamo Prison did not consider the efficiency factor at the beginning of its establishment, which led to the delay or extension of the trial process of "prisoners" for many years.

Eric Lewis, the then chairman of the American human rights organization "Probation America", published an article in the British "Independent" that those who were imprisoned without charge were left there to die without even credible evidence. Guantanamo, the "prisoner forever" in our history, became a monument to the demise of the American rule of law.

Black prisons all over the world

Not only about Tanamo Prison, in fact, the United States has set up secret prisons all over the world, and Lithuania is an important part of the "black prison network" in the United States.

The Lithuanian government plans to sell a property on the outskirts of the capital that was once used as a prison by the US Central Intelligence Agency (CIA), according to The Washington Post.

It is reported that the CIA purchased the land through a front company called "Elite" and built an equestrian school with prefabricated building materials shipped overseas, but it actually "embeds" a "black prison" with a concrete structure.

Anussoskas, who led a Lithuanian parliamentary investigation into the site in 2010, said that because the rooms were windowless and soundproofed, people could "do whatever they wanted" there.

Although not as famous as Guantanamo, this "black prison" also has a "black history" of trampling on human rights.

In early January, the Lithuanian government paid Zubaida, known as a "permanent prisoner", 100,000 euros to compensate for the torture he received in prison, including sensory and sleep deprivation, solitary confinement, noisy environments and bright light stimulation.

In addition, the United States has also set up a large number of secret prisons in Afghanistan and its allies after the war in Afghanistan.

After the U.S. invasion of Iraq, the atrocities, torture and murder of Iraqi civilians were carried out.

What is less known is that the American "black prison" even opened in the sea.

The United States used warships to build "floating prisons" at sea, and staged the human rights tragedy of "Guantanamo at Sea".

The New York Times revealed that the U.S. Coast Guard has been detaining suspects without trial on board for a long time.

The detained prisoners recalled that more than 20 people were handcuffed to the boat together, and the space was very small.

They can only get very little food every day, and the sanitation conditions are quite poor. Some people even begged the guards, hoping that the other party would shoot him directly. He could no longer bear this kind of life.

An independent panel of experts on human rights appointed by the UN Human Rights Council recently issued a statement condemning the continued use of the much-maligned Guantanamo prison by the United States, calling it "a stain on the US government's commitment to the rule of law."

The United Nations website published an article citing the statement of the expert group that the arbitrary detention and torture or ill-treatment carried out by the United States at Guantanamo prison without trial is complete for any government, especially one that claims to protect human rights. unacceptable.

Experts say Guantanamo is a "notorious place" characterized by the "systematic use of torture and other cruel, inhuman or degrading rights" against hundreds of people who were brought to the site and deprived of their most basic rights treatment of personality".

The Canadian Broadcasting Corporation reported that many people at Guantanamo were tortured and held indefinitely without trial.