Operation "Uzi-Samba" .. Did the Mossad try to recruit Haykal?

More than half a century ago, the Israeli Mossad announced an attempt to communicate with the late Egyptian writer Muhammad Hassanein Heikal, sparking a wide interaction inside Egypt. 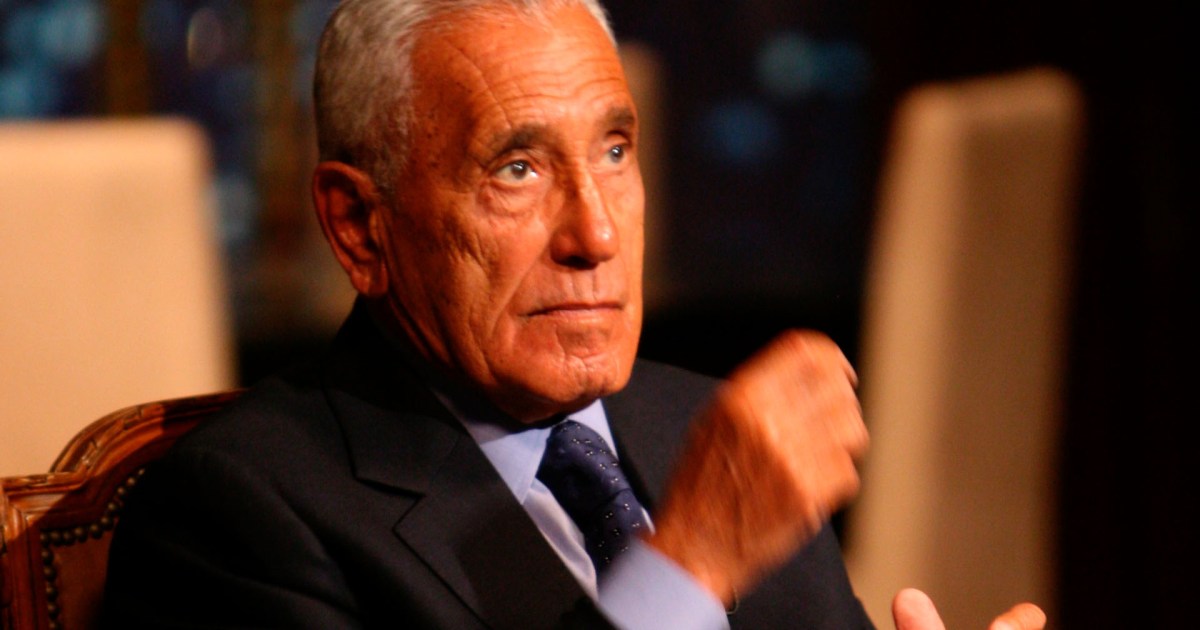 The Israeli Mossad's announcement of an attempt to communicate with the late Egyptian writer Muhammad Hassanein Heikal, more than half a century ago, sparked a wide interaction inside Egypt, especially with the ongoing controversy over the fact that Ashraf Marwan, the son-in-law of the late Egyptian President Gamal Abdel Nasser, was spying.

Through the secret intelligence and diplomatic files in the Israeli archives, which have been declassified, journalist Amir Oren explained the details of what he called the failed recruitment process.

In an article in the newspaper, Haaretz, the Israeli journalist said that there was a complex operation carried out by the Mossad during the 1960s, with the aim of getting closer to Heikal, who was influential within the decision-making circle in Egypt.

He added that the personality of the Egyptian journalist, who was a friend of the late President Gamal Abdel Nasser, was not tempted by money. "There is no indication that he could be blackmailed," he added. "He was a fierce patriot, and he was resentful of Israel's rising power."

Despite what the Israeli side indicates about the failure of Haykal's recruitment process, the echo of the attempt itself and its disclosure at the present time, has raised many questions among Egyptian politicians and media professionals.

This comes at a time when Ashraf Marwan's personality is still causing controversy, and the fact that he worked as a spy for Egypt or Israel, as well as his mysterious death in London in 2007.

According to the article, the Israeli intelligence service sought - by setting up a detailed process - to persuade Heikal to hold meetings with Israeli officials or visit Tel Aviv.

For this operation, a wide network of intelligence agents were harnessed in Athens, Geneva, New York, Washington, Los Angeles, Paris and Rome.

As for how to get to the structure, the Mossad officers discussed several proposals, all revolving around the use of American or European journalists, as well as an American academic and an Egyptian police officer, all of whom had ties to the Egyptian journalist.

According to Haaretz, Mossad officers finally settled on exploiting the friendship between Haykal and the American writer Robert St. John, to be the latter as a mediator in the persuasion process.

That is why the operation was called "Uzi-Samba".

The Israeli journalist said that the Mossad wanted to complete the mediation process in New York City, USA, on the sidelines of Heikal's visit with the Egyptian President to the United Nations, in September 1960, but he left for Egypt before communicating with him.

The plan was arranged so that St. John would meet with Haykal, then set the stage for a meeting with a member of Israel's mission to the United Nations, and then a higher-ranking member of Ben-Gurion's government, Moshe Dayan.

The article indicated that the Egyptian journalist’s file in Israeli intelligence documents, which covers the period from 1959 to 1960, did not mention the ultimate goal of those efforts, but Oren suggested that the goal was to recruit Haykal or use it to influence Cairo’s policy toward Tel Aviv, or at least change The course of Egyptian public opinion against Israel.

It was recently revealed that Israel tried to recruit Heikal or Uzi, which is his nom de guerre, inside the Mossad between the years 59 and 60, through an Egyptian police officer, which it failed to do. Ministers of Egypt.

Professor Muhammad Hassanein Heikal will remain a value we cherish, a patriotic writer, an Arab nationalist, who believed in the saying of the late leader Gamal Abdel Nasser (that what was taken by force is not restored without force), the professor left while he was on his initial positions without negligence, and when the Zionists come out now to say that they strived a lot for

On the other hand, through an article titled "Heikal's knot in the Israeli archives", the former editor-in-chief of the Arab Nasserite newspaper, Abdullah Al-Sanawi, tried to refute the allegations about Israel's attempt to get close to Haikal or make him a spy.

Al-Sanawi said that since the rise of Haykal's role next to Gamal Abdel Nasser, every word he wrote has been subjected to follow-up and analysis of Israeli intelligence to conclude what the strongman of Egypt thinks, noting that Egyptian national security was the number one issue for the famous journalist, he said.

Al-Sanawi made it clear that what Haaretz published regarding Haykal should have been reviewed by the Mossad, in order for the effect to reach an extent that no one expected.

Despite the Mossad’s review of the published story, its construction was confused and faltering, and the final goal of it did not appear, according to the vision of the Egyptian journalist with Nasserist orientations, considering that the Israeli journalist “tried to fill in the blanks of the novel with the conclusion that the Mossad might have thought of recruiting him, or using it to influence Cairo’s policy toward Israel.” Or at least change the course of anti-Tel Aviv public opinion."

Al-Sanawi underestimated the value of the published Israeli documents, saying, "Do not say anything significant, just thinking of Mossad officers to approach Haykal to see how Nasser was thinking."

I try a lot that he is not talking about a personal matter, but the truth is that this is the headline in the most important Israeli newspaper, I am very happy https://t.co/R5V8LMC1VU

Haykal's role in the Israeli vision

To highlight the role of Haykal in the scene of the Arab-Israeli conflict, the Egyptian writer referred to a study prepared by the Israeli academic specializing in Arab and African affairs, "Yo Hai Bar Sela", which talks about Haykal's role in the Arab-Israeli conflict, as it was considered that he crystallized the Arab vision towards Tel Aviv and formulated the discourse The Arab, whose impact has extended until now, and given him a cultural and cognitive depth.

The Israeli academic described Haykal as a special policy maker and legendary editor-in-chief, under whose leadership Al-Ahram was the most important newspaper in the Arab world. With the Arab public, everything he writes is as if Nasser himself said it.”

The study also referred to the Egyptian writer's views on the Palestinian issue as a crucial issue, based on his convictions that Israel is an aggressive base in the service of Western imperialism, and has expansionist ambitions at the expense of the Arab person.

Al-Sanawi concluded his article with the possibility that the Mossad planned to assassinate Haykal and not to recruit him, saying, "Perhaps there are those who tried to reach him with the assassination at some stage, but this is a matter that requires access to the hidden documents, perhaps revealing."

For his part, the novelist and parliament member, Yousef Al-Qaid, said that what the Israelis are claiming about attempts to get close to Heikal is incorrect and reflects an absurd scene as it is an attempt to dig up graves.

During a telephone interview with the “Cairo Talk” program on the “Cairo and the People” satellite channel, Al-Qaeed added that millions of Egyptians and Arabs know very well Haikal’s position on the Zionist entity, which he has long considered an enemy, stressing that his hostile stance towards Tel Aviv posed a threat to his life and even exposed him to many dangers.

He explained that many were subjected to such false allegations by the Zionist entity, such as the Egyptian writer and Nobel Prize winner Naguib Mahfouz.

Far away from all the confusion in which they are drowning,

Israel's secret documents on the failure of all attempts to recruit / influence / blackmail, for Egypt's most important journalist, Professor Muhammad Hassanein Heikal.

May God have mercy on him https://t.co/XhBkv3HGBJ

An Israeli journalist talks about intelligence documents that reveal Mossad’s attempts to recruit journalist Muhammad Hassanein Heikal, regardless of the fact that Mossad’s greed to recruit a person is a suspicion in itself of the same person, but the story, if true, is the dumbest Israeli thinking, because it is obvious that whoever plays with the “Great Teacher” He doesn't need to play with a boy

In the early 1940s, Mohamed Hassanein Heikal began his journalistic life as a war correspondent for the "Egyptian Gazette" newspaper. With the rise of his journalistic star, he moved to work for Rose Al-Youssef magazine and from there to Akhbar Al-Youm newspaper. No sooner had he reached the age of 29, he became editor-in-chief of Akher Sa'a magazine.

When officers in the Egyptian army moved to oust King Farouk I in July 1952, and in turn took power, Heikal was on the cusp of major changes in his career, moving from the rank of a skilled journalist to the ranks of men who influence decision-making in Egypt.

Despite his position close to the circle of power, some even considered him one of its axes, he refused the government positions that were offered to him, and contented himself with heading the editor-in-chief of Al-Ahram newspaper from 1957 until 1974, but before the death of Abdel Nasser he assumed the position of Minister of Guidance "Information", and after the death of his friend he left the ministry. .

During his career with Al-Ahram, he raised the distribution to record rates and established specialized research centers within the press institution, such as the Center for Political and Strategic Studies, the Center for Contemporary History of Egypt, and the Center for Journalistic Studies.

With the late President Anwar Sadat assuming the rule of the country, Heikal remained standing close to power until the October war ended in 1973, when he disagreed with Sadat about dealing with its results, and the dispute reached its climax with the conclusion of the peace agreement with Israel in 1979, as it was One of his opponents and mocked his pen to express his views, so he was arrested on the list of famous arrests in September 1981.

He did not spend many days in detention, and when he was released after the assassination of Sadat on October 6, 1973, he returned to his pen until he retired from regular writing and journalistic work in September 2003, after he turned eighty, leaving a huge press archive and dozens of books on political affairs.

On February 17, 2016, Heikal, who was nicknamed the Dean of Arab Journalists, passed away at the age of 93, but his impact still raises controversy from time to time.