His Highness Sheikh Mohammed bin Rashid Al Maktoum, Vice President and Prime Minister of the UAE and Ruler of Dubai, received yesterday the President of the Republic of Cyprus, President Nicos Anastasiades, who is currently visiting the country to attend his country's celebrations of its National Day at Expo 2020 Dubai. Mohammed bin 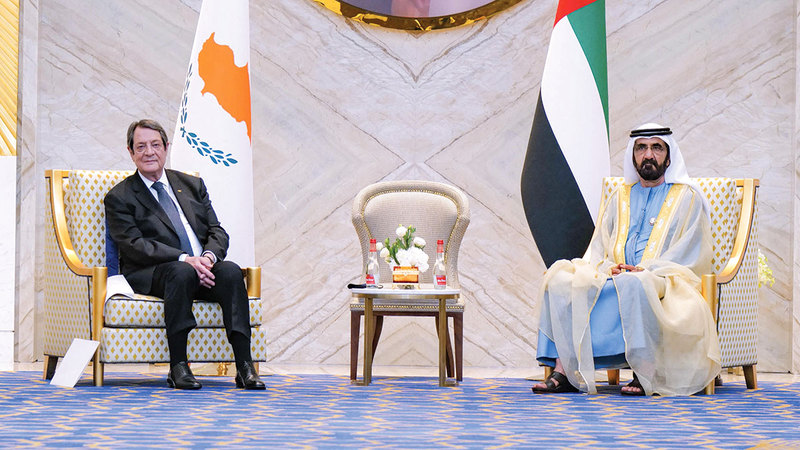 Mohammed bin Rashid during his meeting with the Cypriot president at the "Expo".

His Highness Sheikh Mohammed bin Rashid Al Maktoum, Vice President and Prime Minister of the UAE and Ruler of Dubai, received yesterday the President of the Republic of Cyprus, President Nicos Anastasiades, who is currently visiting the country to attend his country's celebrations of its National Day at Expo 2020 Dubai.

His Highness Sheikh Mohammed bin Rashid Al Maktoum expressed his sincere welcome to the Cypriot president and the accompanying delegation, at the outset of the meeting, which took place at the Leaders Building at the Expo headquarters, stressing the depth of the ties between the UAE and Cyprus, and his confidence in achieving further prosperity during the next stage, in light of the match The visions and political will in the two countries agree on the importance of making qualitative shifts in relations through a strategic partnership between the two sides, which contribute to achieving broader levels of constructive cooperation, in a manner that serves the interests of the two countries, enhances their opportunities in various fields of development and rises to the level of the aspirations of the two friendly peoples.

The meeting dealt with the overall developments on the regional and international arenas, and issues of common concern, emphasizing the importance of finding the necessary ingredients to establish international peace and security, giving the peoples of the region and the world the opportunity to pursue their development goals and create a better future in which everyone enjoys stability and prosperity.

It also dealt with the future of bilateral cooperation, especially at the level of trade, investment and tourism exchange, in light of the advanced capabilities that the two countries enjoy in these areas, and the ideas they offer that the private sector can also benefit from. And investment in the two countries, to increase the level of coordination and understanding, in order to monitor opportunities that can be used to enhance the contributions of the private sector in advancing the joint economic cooperation process during the next stage.

For his part, President Nicos Anastasiades affirmed his country's keenness to advance bilateral relations to higher levels of cooperation and coordination at various levels, expressing Cyprus' pride in its growing and prosperous relations with the UAE, with its approach that calls for openness to the world, and expressing his appreciation for the renaissance the country is witnessing. Comprehensive, under the leadership of His Highness Sheikh Khalifa bin Zayed Al Nahyan, President of the State, in various fields, and its achievements that reflect an ambitious vision for the future, and provide an inspiring model for sustainable development.

The Cypriot president congratulated the leadership and people of the UAE for the successful and distinguished organization of this historic session of the prestigious Expo, stressing that hosting this huge global event for the first time in the Middle East, Africa and South Asia opens many opportunities for communication, exchange of ideas and visions on creating a reality A new story for humanity based on understanding, rapprochement and the desire to reach perceptions through which common cross-border challenges can be overcome, expressing his sincere wishes to the UAE and its honorable people for further progress, advancement and prosperity.

The meeting was attended by His Highness Sheikh Maktoum bin Mohammed bin Rashid Al Maktoum, Deputy Ruler of Dubai, Deputy Prime Minister and Minister of Finance, Sheikh Nahyan bin Mubarak Al Nahyan, Minister of Tolerance and Coexistence, and a number of ministers and officials from both sides.

In addition, His Highness Sheikh Mohammed bin Rashid Al Maktoum and President Nicos Anastasiades witnessed the signing of a number of agreements and memoranda of understanding, including a declaration on the establishment of a comprehensive strategic partnership between the two governments, signed by the UAE Minister of State for International Cooperation, Reem bint Ibrahim Al Hashemy. and the Minister of Finance of the Government of Cyprus, Konstantinos Petrides.

Al-Hashemi also signed a memorandum of understanding with the Minister of Energy, Trade and Industry of Cyprus, Natasha Peledis, on cooperation in the field of diplomatic training between the Diplomatic Academy of the Republic of Cyprus and the Anwar Gargash Diplomatic Academy.

• The meeting dealt with the overall developments on the regional and international arenas, and topics of common interest.