Europe is bracing for an unprecedented wave of refugees, though the influx of Ukrainians trying to escape Russian military action will depend on how quickly... 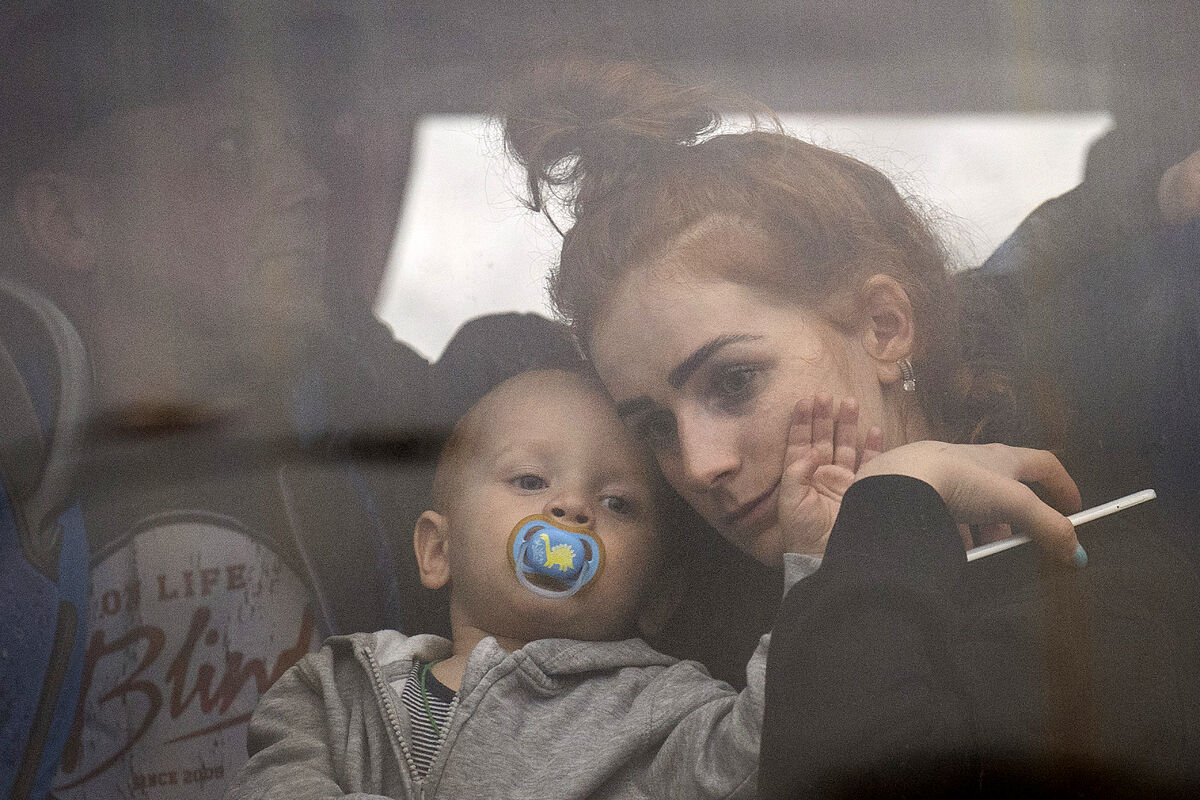 Europe is bracing for an unprecedented wave of refugees, though the influx of Ukrainians seeking safety from Russian military action will depend on how quickly President

in the coming days, most of them bound for Poland.

The UNICEF regional director for Europe and Central Asia, Afshan Khan, has predicted that the departure of the Ukrainians will become a real

in a matter of hours.

At the moment, UNHCR and UNICEF anticipate the departure of "a population of between one and three million people towards Poland, and between one and up to five million if we take into account all the neighboring countries," Khan has made known.

The European Commission handles the figure between

Whatever they are, and unlike the migration crisis of 2015, when the Syrian war caused what had been the largest exodus to Europe since World War II, they will be well received.

For Ukrainians, moreover, it would be comparatively easy to travel to other European countries, since there is a

visa-free regime between the EU and Ukraine.

That means that people with a Ukrainian passport can enter for tourist purposes without special permission and stay in EU countries for up to three months.

In Poland, one of the exit doors for Ukrainians, current regulations provide that they can stay in the Schengen area for 90 days without the need for a visa.

In the event of war, the authorities may issue residence permits of longer duration, after consultation with Brussels.

Preparations for the reception of Ukrainian refugees began several weeks ago, although the effects of this flow, given the mobility with which Ukrainians will be able to move, go beyond neighboring Poland, Slovakia, Hungary, Moldova and the Baltic countries.

preparing to receive thousands of people from Ukraine, which is why it declared a state of emergency on Saturday.

According to the Government, some 15,000 Israeli citizens live in Ukraine.

For now, the plan is for the Israeli airline Arkia to offer them special flights from Kiev to Tel Aviv.

Israel not only feels responsible for its citizens in Ukraine, but also for the

Jewish communities in that country.

Ukraine was the center of European Jewry until the Holocaust.

Some 200,000 Jewish Ukrainians are entitled to Aliyah, the Israeli immigration right for diaspora Jews.

Following the annexation of Crimea in 2014, an estimated 30,000 people exercised this right.

Moldova, Romania and Slovakia, in the front line

However, the first line of reception for Ukrainians fleeing the war is made up of Eastern European countries, which, in anticipation of the worst possible scenario, have already established emergency plans.

"We will help people who need our help. We are ready to receive tens of thousands of people and

in just one day 2,000 Ukrainians have crossed into Moldova

", declared the Minister of the Interior of this country,

, Lucian Bode, for his part, has assured that his government is preparing for the arrival of "hundreds of thousands of refugees in an uncontrolled influx".

"We are analyzing how many refugee camps we can install in a relatively short time: 10, 12, 24 hours. We are analyzing the existing accommodation capacities in the border counties, but we are also discussing the second stage, with the neighboring counties, and the third stage throughout the country," he explained.

Romania, he said, has shelters and the "necessary equipment," such as

, to house and feed "a significant number" of people.

, in Romania there are queues of up to 28 kilometers.

Authorities are letting women and children out and returning men to the borders.

NGOs have criticized Romania for not being prepared for a larger number of refugees.

There are only about 2,500 reception places, which would not be enough in case of doubt.

Roman Mikulec said his government was also willing to participate, but the Bratislava government does not want to let anyone into the country without checks.

The neighboring Czech Republic has already offered to step up surveillance of the Schengen border with Ukraine.

We don't want to "scare public opinion but if the conflict escalates, we have to react to the situation together from the beginning," Czech Interior Minister Vít Rakuan said.

In Warsaw, the spokesman for the Polish government, Piotr Müller, assured that "if refugees from Ukraine arrive in Poland" they will be welcomed, since "preparations have been carried out" for this situation.

Müller stressed that "in situations of armed conflict there may be displacement of people, not only internally, but also to neighboring countries", and recalled that his government "recently" launched a plan to "provide humanitarian aid" to Ukraine.

Meanwhile, the Polish Red Cross announced that it is finalizing preparations to set up eight reception points for refugees in the eastern Polish provinces.

Poland is the European Union (EU) country that has provided more work permits to people from non-EU countries for the last four consecutive years and since last year it has faced a wave of illegal immigration from Belarus.

The main Polish cities have already established, at the request of regional governments, plans to set up temporary shelters and provide resources in the event of the arrival of Ukrainian refugees.

In Krakow, the municipal government assured a few days ago that

several schools in the city could be enabled "from one day to the next" as reception centers for refugees.

Deputy Foreign Minister Marcin Przydacz does not expect a "storm on the borders" and Poland shares 500 kilometers with Ukraine, but "we have to be prepared for a wave of up to a million people"

Regional authorities in the southeast of the country have been looking for possible accommodation under high pressure for days.

The United States, which has reinforced its military presence in Poland and moved its embassy from Kiev to Lviv, just 80 kilometers from the Polish border,

has created its own reception center in a hotel

in the city of Przemyl, in the Polish border region with Ukraine, which is staffed 24 hours a day and accessible to US citizens.

The Baltic republics - Estonia bordering Russia and Latvia and Lithuania bordering Belarus (and also the Russian enclave of Kaliningrad in the case of Lithuania) - announced in recent weeks their willingness to accept refugees from Ukraine, although their Governments have not yet approved definitive plans for this .

Less friendly tones are heard from Hungary, especially when the electoral campaign is underway in that country.

"In case of war, hundreds of thousands or even millions of refugees from Ukraine could arrive in the country and reshape our political and economic situation," said Prime Minister

, despite which, he stated that the competent authorities have already started the preparations, although it is not yet known what they are.

That plan seems more accurate in Slovakia, which also shares a border with Ukraine.

According to Defense Minister Jaroslav Nad', the country expects tens of thousands of refugees even in the event of a "limited military conflict" in neighboring Ukraine.

The government has not yet published its "migration plan".

But, as Nad' announced at the end of January, in the event of war all Ukrainians arriving in Slovakia will receive refugee status.

Germany is also preparing for a possible refugee influx in the face of the possibility that, as in the 2015 crisis, it will become the destination of choice for refugees.

"We are of course prepared for conceivable scenarios in contact with various EU states, including the Baltic states, as well as with the European Commission," Federal Interior Minister Nancy Faese said.

The preparations, on this occasion, are the result of the lessons learned from the previous crisis.

"Our first scenario is to provide humanitarian aid in neighboring countries," said the minister.

InterviewMateusz Morawiecki, Polish Prime Minister: "Either we stop Putin's imperial dream or it will be a nightmare for the EU"