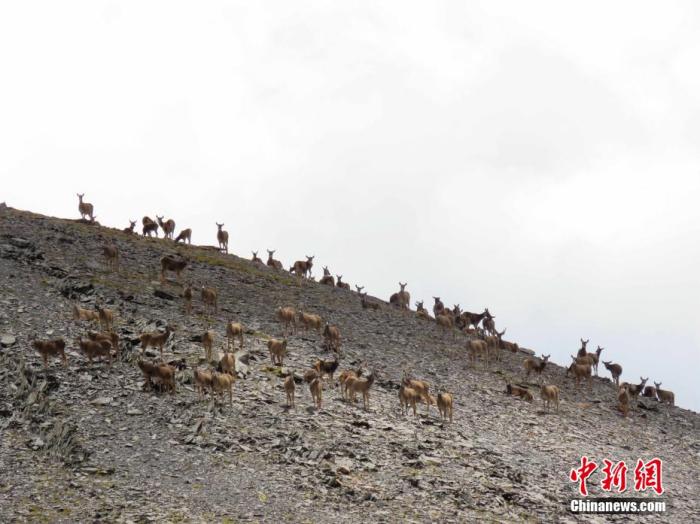 Sanjiangyuan is located in the Qinghai-Tibet Plateau, the "third pole" of the world, with an average altitude of 4,712 meters.

A group of wild animals.

However, at the end of the 20th century, due to multiple factors such as global climate change and overloaded grazing, the Sanjiangyuan, which is known as "the dazzling stage of the most powerful vitality on earth", has been eclipsed by dry pastures, deserted land, and dry rivers.

In Qumalai County, Yushu Tibetan Autonomous Prefecture, Qinghai Province, where the Kangba Hanziga Pagoda is located, many rivers originate or flow through the source of the Yangtze and Yellow Rivers.

"In such a remote place on earth, herdsmen's awareness of ecological protection is no worse than that of urban residents. I started to learn from herdsmen." In 2010, Gata worked in a township in Qumalai County. The protection of the mountain comes from the respect for sacred mountains and holy waters, which is a primitive ecological culture."

The concept of "national parks" was an imported product. At that time, there was no example of national parks in China.

Peng Kui, an expert at the Institute for Sustainable Global Environment, said, "The primary goal of national parks is to build a unified, standardized and efficient national park system with Chinese characteristics."

At that time, in China, a nature reserve, forestry, environmental protection, water conservancy, agriculture and animal husbandry and other departments had overlapping functions and unclear rights and responsibilities.

At the same time, integrate the responsibilities of forestry and other departments, and set up an ecological environment and natural resources management bureau under the management committee to fully realize centralized, unified and efficient protection management.

"Building a national park is not simply building infrastructure." Today, as the director of the Ecological Environment and Natural Resources Administration of the Qumalai Management Office of the Changjiangyuan Park of Sanjiangyuan National Park, the number of ecological guards in Gata and the park varies. , Tibetan antelope escort team, snow leopard monitoring team, nature photography team, tent art team of different professions to carry out mountain patrol, monitoring and promotion.

"After the construction of the national park, herdsmen have more advanced monitoring methods and more active participation." In Gata's view, white garbage pollution was once a major hazard to the national park. "Now, more and more garbage is picked up, eating and drinking junk food. fewer and fewer people.”

"The mountains are clean, the water is clean, and the grasslands are clean. Today, people flying in the sky, walking on the ground, and swimming in the water live in harmony. People and nature are a community of life." Gata said that once wild animals were afraid of people, now, brown bears often Run to the herdsman's house.

"Establishing a system of nature reserves with national parks as the main body" is a major achievement of the party's century-long struggle, which endows the work of national parks with great political and historical significance.

It is reported that the officially established Sanjiangyuan National Park has a total area of ​​190,700 square kilometers, making it the largest and highest-altitude national park in China.