At the Crif dinner, call for "general mobilization" to fight against anti-Semitism

Jean Castex called for a "general mobilization of the whole of society" to fight against anti-Semitism, promising to "continue the fight", "relentlessly", Thursday during the dinner of the Council representing ... 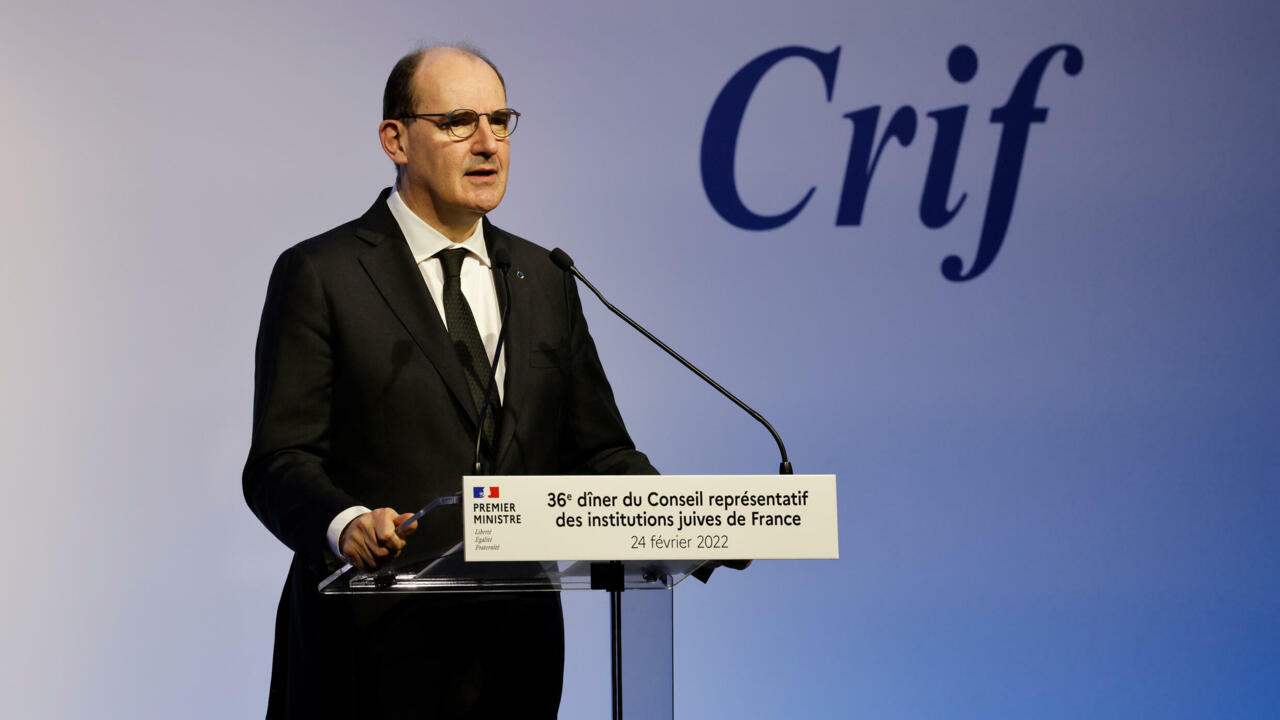 The 36th edition of this "republican" meeting - canceled for the past two years due to Covid - took place without Emmanuel Macron, called to a summit of the Twenty-Seven in Brussels after the invasion of Ukraine by Russia .

It was therefore the Prime Minister who gave the Head of State's speech to the politicians, ambassadors, religious, trade unionists, artists, media personalities, etc., gathered at the Carrousel du Louvre, a total of a thousand people.

The President of the Republic assures us that the "fight against anti-Semitism" is at the same time "international", "European" and "of course national".

"In the months and years to come, you can count on me to continue the fight. Relentlessly," he promises.

"We will only come to the end of the filthy beast (...) by the general mobilization of the whole of society", also declared the Prime Minister on behalf of Mr. Macron.

Thus the adoption by Parliament of the definition of anti-Semitism developed by the International Holocaust Remembrance Alliance (IHRA), a text without binding value but supposed to help better train public officials.

"Our security forces, our magistrates thus learn in their schools to better flush out its new faces (...). Our teachers are made aware of it during their training", "police and gendarmes receive specific training", listed Jean Castex.

"The results, little by little, are appearing: in the police stations and the brigades concerned, the victims are better taken care of, the listening is more attentive. (..) The sentences pronounced are harsher and fairer", has he continued.

"Barrage at the extremes"

The executive also welcomed the fact that “anti-Semitic acts (are) in 2021 down 14% compared to the year 2019, the last reference year since without confinement”.

An interpretation that the Crif disputes: he does not see why the year 2020 should not be taken into account and is alarmed by a 74% increase in anti-Semitic acts since last year.

The government has also assured that it wants to continue the fight against "the scourge of digital anti-Semitism" and "to attack" the "conspiracy that thrives" on social networks.

He promised to continue the fight against "Islamist separatism", or against anti-religious acts.

In higher education establishments, "marked by an inflation of anti-Semitic and racist acts", the government proposes to extend existing systems already in National Education: the "national reaction team" which can be deployed "in the event of anti-Semitic incident to "support the teachers", and training of "referents".

Finally in his speech, the President of the Republic announces that he will go "to Toulouse on March 20, with the Israeli President, to bring to life the memory of the victims" of the terrorist Mohammed Merah in March 2012, including children from Ozar Atorah Jewish School.

Seven weeks before the presidential election, this 36th edition, which took place in the presence of contenders for the Elysée - Valérie Pécresse, Anne Hidalgo, Yannick Jadot or even Jean Lassalle - was an opportunity for the president of Crif to launch a call "to block all far left and far right candidates".

"Jean-Luc Mélenchon and Eric Zemmour multiply the polemics on the back of the Jews. For one, the Jews are not enough universalists. For the other, they are not enough French", declared Francis Kalifat.

"The two have in common a great propensity to rewrite history, especially that of the Jews. For one, it's the Jewish plot. For the other, it's Pétain, savior of the Jews," he said. he lambasted, to applause.

"As for Marine Le Pen, her attempts at demonization do not deceive anyone: the National Rally always accommodates anti-Semitic prejudices in its ranks," he said.

Crif President Francis Kalifat at the dinner organized by his institution on February 24, 2022 in Paris Ludovic MARIN POOL / AFP

Mr. Kalifat had previously expressed his "unease" around the fight against anti-Semitism, judging that the "approach" of the various governments through comprehensive plans to fight "against racism and anti-Semitism" does not "work ".

He had called for a "specific and targeted strategy".