Many Pacific island countries praised China's assistance to fight the epidemic: "helping in the snow", they are true friends 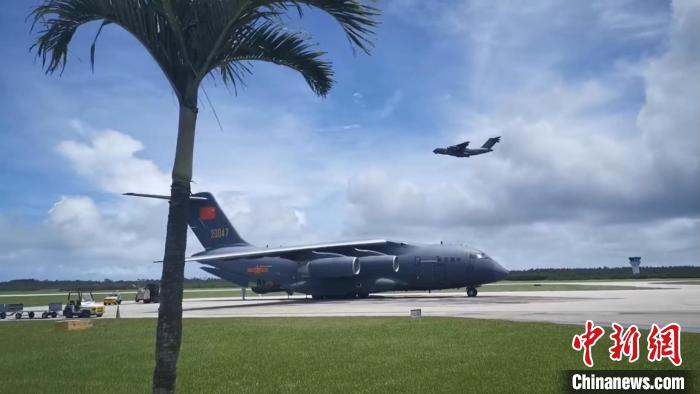 Previously, Zhaoqing City, Guangdong Province urgently raised 2.9 tons of anti-epidemic materials such as masks and protective clothing donated to Kiribati, which were shipped by cargo ship on January 30 and are expected to arrive in mid-March.

Entering 2022, a new wave of epidemics broke out in many Pacific island countries, especially Kiribati and other island countries with "zero confirmed diagnoses" have "broken defenses".

Relevant experts said that due to the limitations of island countries' testing capabilities, traffic conditions and vaccination rates, the actual number of newly infected people is very likely to be higher.

In the face of the difficult situation, China has stood up and quickly responded to the request of the relevant Pacific island countries to provide them with vaccines, testing reagents, masks and other anti-epidemic materials.

On February 21, 240,000 new coronavirus testing kits were assisted in Samoa and departed from Guangzhou on a commercial cargo flight, which is expected to arrive around February 27.

Photo courtesy of the Ministry of Foreign Affairs

In fact, in the process of responding to emergencies in Pacific island countries, China's helping hand can be seen every time.

At the end of November last year, large-scale anti-government riots occurred in Honiara, the capital of the Solomon Islands, and a large number of facilities, including Chinatown, were burned and looted.

China urgently provided multiple batches of police material assistance to the institute and dispatched a police advisory team to fully assist the government in maintaining stability and ending violence and restoring social development.

On January 15 this year, Tonga was hit by a volcanic tsunami. According to the assessment of the World Bank and the International Fund for Disaster Reduction and Post-Disaster Reduction, the direct economic loss reached 90.4 million US dollars, which is close to one-fifth of Tonga's annual GDP.

In this regard, China has fully demonstrated "China's speed", becoming the first country in the world to provide emergency supplies to Tonga, and has provided Tongji with mobile board houses, tractors, generators, pumps, water purifiers, More than 1,400 tons of disaster relief materials including emergency food and epidemic prevention materials.

China not only solves the "urgent need", but also considers "teaching people how to fish" in the long run.

Among them, more than 110 bulldozers, trucks, excavators and other equipment assisted by China to Tonga arrived at the same time along with the relief materials, which effectively helped Tonga to speed up the post-disaster reconstruction process and promote infrastructure construction and social and economic development.

Tongan Prime Minister Sovalaini led a number of cabinet ministers to welcome the relief supplies from the Chinese government in the rain. Reliable good partner.

Many local people also went to the Chinese embassy to express their thanks, saying that China is a true friend.

Many Western media also have to admit that China's emergency assistance to island countries fully demonstrates the responsibility of a major country.