In Hong Kong, the anguish of parents separated from their Covid-positive children

Parents in Hong Kong are being separated from their children and babies who tested positive for Covid-19, only adding to people's anger over the financial hub's lack of preparedness, and... 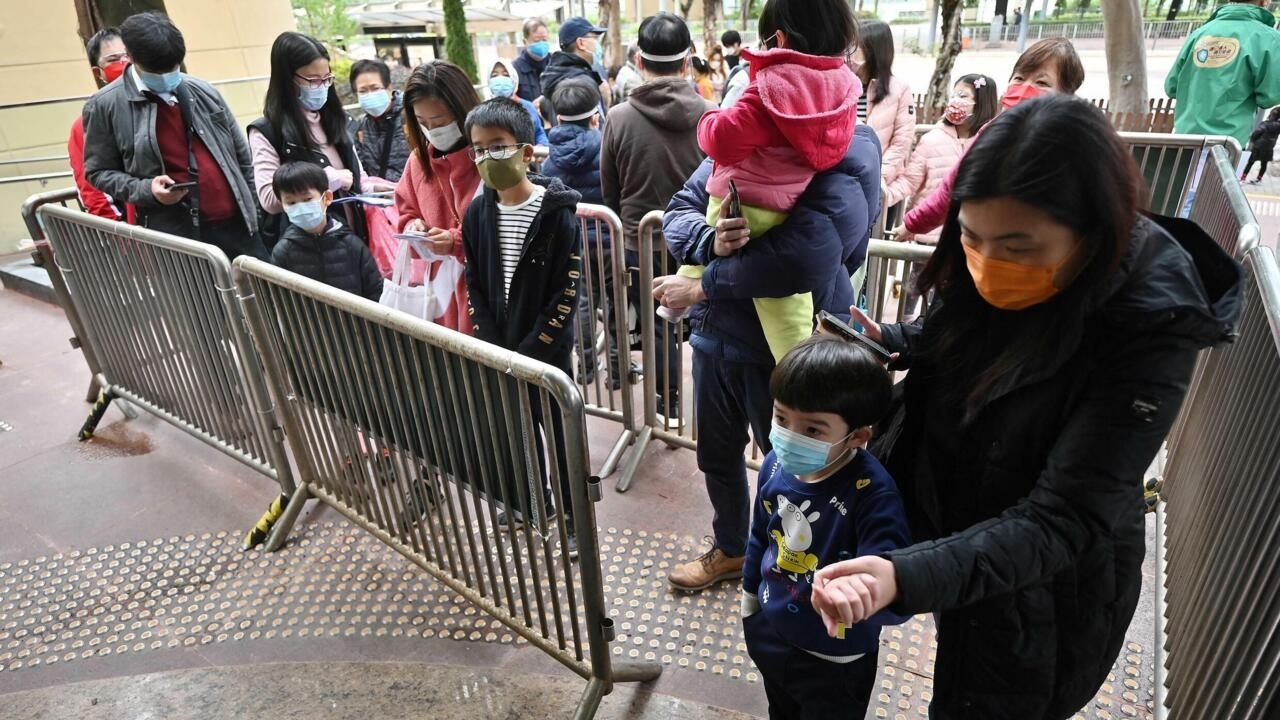 Laura, a 32-year-old permanent resident born in Britain, told AFP her 11-month-old daughter Ava tested positive after being admitted to hospital on Sunday evening with a fever and a labored breathing.

Ava is now stable in the intensive care unit and will soon be moved to an isolation unit, but she will have to recover without her parents for at least seven days.

"I said I would sleep in the hallway, on the floor, anywhere," she said, holding back tears.

Laura and her husband Nick managed to share a quick video call with Ava on Tuesday.

"It was heartbreaking," Laura said, asking to use only her first name.

"The separation anxiety is at its peak at that age, she was inconsolable, she was just crying 'Mom, Mom'".

Women and their children wait outside the Caritas medical center where they are preparing to spend the night, February 16, 2022 in Hong Kong Peter PARKS AFP / Archives

"We have done our best to ensure that the children and the Covid-positive parents are in the same hospital so that the parents can take care of the children," he told reporters on Tuesday.

"But there are many, many cases and many infected children. It takes time for our staff to set up suitable places for them."

In the grip of the worst wave in its history, the densely populated metropolis is currently registering several thousand cases every day, while hospitals and isolation units are overflowing.

A strict Chinese-style zero Covid policy has kept the virus at bay for the past two years, at the cost of isolating the former international hub.

But the arrival of the Omicron variant at the start of the year took the authorities by surprise.

China has ordered Hong Kong to stick to its zero Covid policy and isolate anyone who tests positive.

In a 17,000-member, mostly Cantonese-speaking Facebook group for mothers seeking treatment for the coronavirus, many said they had sick children but feared going to hospital.

“My son is two and a half years old and has been feverish since Monday morning,” wrote a member called Shan Hor.

Hong Kong authorities are facing growing anger over a lack of preparedness to deal with a surge in cases, despite two hard-earned years of respite under the zero-Covid policy.

"If a child has to be hospitalized due to Covid, it should be possible for a parent to stay in the same room, unless the child's condition is very serious", denounced on Twitter Siddharth Sridhar, microbiologist at the University of Hong Kong.

"In times like these, it's more important than ever to stay rational and compassionate," she added.

Strict and often changing social distancing measures have penalized businesses and weighed particularly heavily on children whose schooling has been disrupted over the past two years.

On Tuesday, Hong Kong leader Carrie Lam announced that the summer vacation would be immediately brought forward to March and April, to make schools available for the three rounds of mandatory citywide Covid tests in March.

Figures this week show departures from the city have reached their highest level since the start of the pandemic and political repression.

"My real fear now is that the parents are delaying their treatment for fear of separation," David Owens, a local doctor, wrote on Twitter this week.