Teodoro García Egea, the fall of the man who has shaped the PP with a heavy hand

“I am crystal clear where my place is.” And her site, that of Isabel Díaz Ayuso, was in Madrid. She herself confirmed it, under the watchful eye of Pablo... 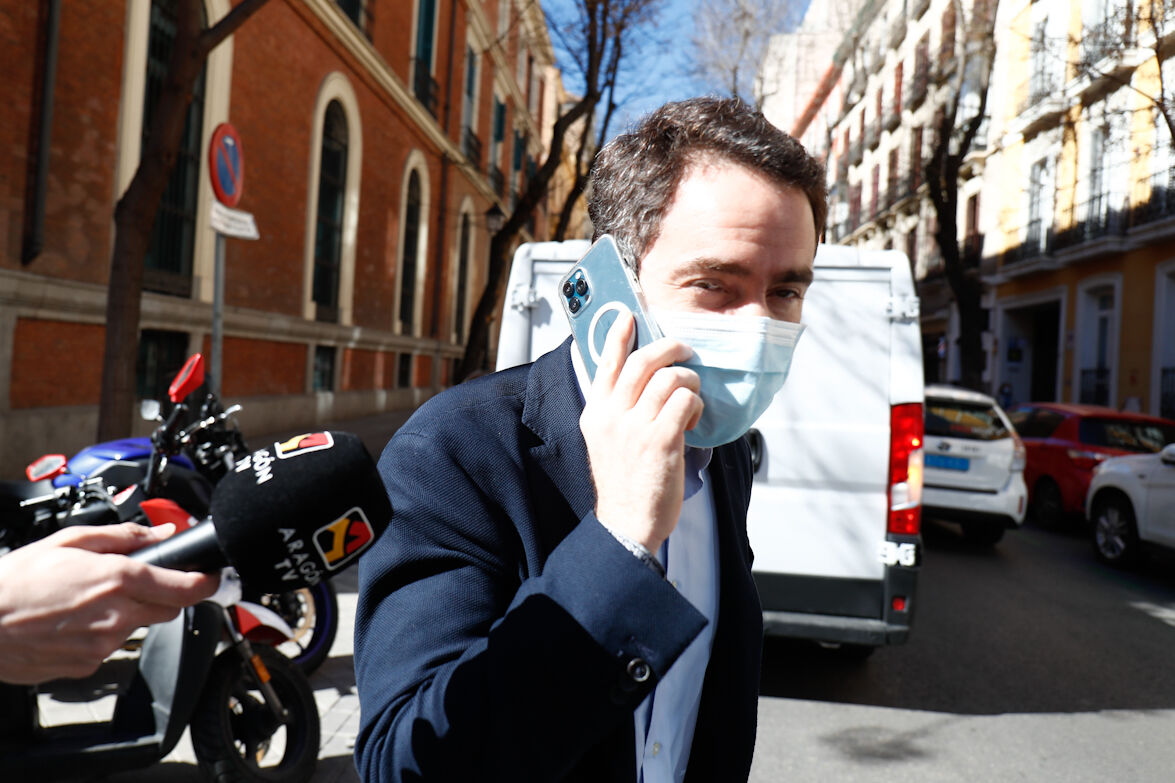 “I am crystal clear where my place is.”

And her site, that of Isabel Díaz Ayuso, was in

She herself confirmed it, under the watchful eye of Pablo Casado on the penultimate day of the

that the PP closed almost five months ago in

, once a fetish territory for the popular and, that October 2, the scene of what was interpreted as a truce between the two leaders for control of the party in Madrid.

Hours later, however, a talkative Teodoro García Egea entertained a party dinner in the Valencian capital, joking that Madrid was far from being

That is, laughing without complexes at Ayuso's famous quote.

"Neither Madrid is Spain nor Spain is Madrid," the former

of the PP and faithful squire of Casado let out with laughter.

At that dinner, by the way, Teodoro García Egea had no qualms about criticizing the excessive media coverage that Ayuso received to the detriment of his friend.

At that time, it was already clear that what was underway was not a simple disagreement between Casado and Ayuso, but that the foundations were already being laid for what threatened to lead to open war.

So a García Egea without complexes, who in short distances is friendly and loquacious, already hinted that Ayuso could reign in Madrid, but that the reality beyond the M-30 was quite another, according to what he analyzed before those present .

And there the leader would have, supposedly, nothing to do.

The cards were on the table.

Although the National Convention closed with an image of unity hours later,

's strategy in the conflict with Díaz Ayuso has blown it up.

Those who then supported Egea and his boss have withdrawn their support.

That act of the PP was mounted in Valencia to promote

, who, backed by Genoa, had just been released as president of the regional PP.

However, the Alicante leader, a personal friend of Egea, has ended up aligning himself with Alberto Núñez Feijóo's thesis with a notable personal tear.

left his predecessor, Isabel Bonig, badly wounded, who lamented the ways of the until now all-powerful secretary general when molding a party in the image and likeness of Genoa.

Without any kind of aversion to the clash to achieve his objectives, as described by those who know him, this Murcian who jumped into the media spotlight when he made Casado the unexpected winner of the PP primaries does not beat around the bush.

Disputes and internal fractures have occurred in the territories where García Egea has tried to assert his criteria.

And impose on the kindred of him.

It happened in the Valencian PP, where Bonig yielded the witness accusing Genoa of having lied to him.

It also happened in

, where the clash with the direction of Juanma Moreno during the celebration of the provincial congresses was notorious.

The one in Seville, for example, ended with the planting of the president of the Board on the day of the closing ceremony -which García Egea did not miss- after the election of the favorite candidate from Genoa,

There were even allegations of irregularities.

, the confrontation was to the dog's face with Alfonso Fernández Mañueco.

of the PP fired the manager of the party in the territory and Mañueco decided to rescue him for his executive by his personal designation.

The division of the Catalan PP is another of the wounds that still fester and that are attributed to the general secretary of the party.

García Egea has not hesitated to destroy the relationship of trust that existed between the leadership of the Catalan PP, with

at the helm, and that of Genoa.

The intervention of Casado's number two in the configuration of Fernández's trusted team still stings.

In addition, the appointment of

as leader of the PP in

has been equally controversial and discussed by much of the Catalan PP.

So Teo's enemies, as his relatives know him, are not few.

Perhaps the most critical is Cayetana Álvarez de Toledo.

The one who was the spokesperson for the popular in the Congress of Deputies -and now faced with Casado- harshly attacked him in her book Politically undesirable.

Specifically, against that "despotic", "theocratic" or "theodocratic" way of exercising power, in case at this point there was any doubt about who was the recipient of his darts.

Now, if García Egea had a moment to vindicate himself, it was with the frustrated motion of censure in

This telecommunications engineer and robotics expert saw his feud at risk, in which he began his political career before jumping to Congress and befriending Casado.

However, the strategy of PSOE and Ciudadanos to remove the PP from power was frustrated thanks to the votes of three turncoats tied up by García Egea.

The paradox came later, when Ayuso found here the excuse to break with Ciudadanos and call the electoral advance that catapulted her to 65 seats in the

If Egea and Casado then saw the beginning of a new winning political cycle for the PP, the electoral advance that they forced in Castilla y León ended up aggravating their confrontation with Ayuso.

The Murcian, famous for winning an olive stone throwing contest, has ended up choking Ayuso.

Politics Pablo Casado's war against Ayuso bleeds the PP: "This only ends with one of the two out"

PoliticsOpen war in the PP of Castellón after the 'fall' of Casado: A deputy calls number two in the Senate, Salomé Pradas, a "climb"