Few world leaders can read the thoughts of Russian President Vladimir Putin, and Finnish President Sauli Niinisto is one of them. the following 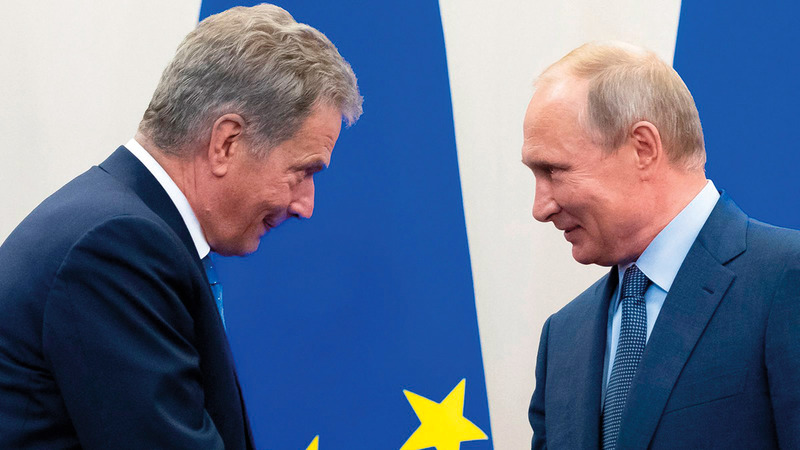 The Finnish President, speaking about his Russian counterpart against the backdrop of the Ukraine crisis:

The Russian and Finnish presidents shake hands at the end of a press conference in the Black Sea resort of Sochi in August 2018. AFP

Few world leaders can read the thoughts of Russian President Vladimir Putin, and Finnish President Sauli Niinisto is one of them. The following are excerpts from the interview.

■ Mr. President, you first met Putin in about 10 years, what was your impression of him at that time?

Putin hosted a dinner, and after that, we drove to Karelia, a village with summer cottages, and played ice hockey.

At one point, he asked me: Why is Finland so excited to become a member of NATO?

■ And what was your response?

■■ My government at the time, although not ruling out membership in the Alliance, had not yet begun preparations for joining the Alliance.

I told him that Finland wants to deepen relations with its neighbors in Sweden and Norway, as well as with the United States and European Union countries, and to strengthen its partnership with "NATO", and that I am a supporter of strengthening European defense.

He asked me why.

I said because every independent nation strives for maximum security.

That was the end of the discussion.

■ Does the man you met at that time resemble the same man who is now in charge of things in Russia?

■■ I wouldn't say I noticed any significant change in his behaviour.

There is only one thing, he may now be more determined.

There was an interesting development last year.

Do you want me to show that more?

From my personal point of view?

I remember last spring, when more Russian troops began to gather near the Ukrainian border, I had a phone conversation with him and he told me it was just a military exercise, and that the troops would be withdrawn in 10 days.

Shortly before that, he had spoken with US President Joe Biden, and it seemed to me that there was a connection between the phone call and the announcement of the withdrawal.

The troops have already withdrawn.

■ When did you feel the first signs of the following escalation?

■■ In June, Biden and Putin held a summit in Geneva to discuss arms control, and the signals from both sides appeared to be positive.

It became clear to us and to other European countries that the Biden administration no longer considered Russia its primary global adversary, but rather China.

At the same time, we talked in different ways about security on the continent, in the countries of "NATO" and in the European Union as well.

In August, I asked Putin what he thought of this security debate.

Then, in mid-October, I heard the first warning signs from Washington and Moscow that there might be trouble.

■ Did you ask Putin about it?

■■ Yes, at the end of October, I was a guest of the Kremlin and asked if there were any difficulties in the negotiations with the United States.

■ This was one day before the Washington Post announced the deployment of new Russian forces near the Ukrainian border.

■■ Yes, but I wasn't fully aware of the situation at the time.

Putin answered my question by saying: No, everything is fine.

Shortly thereafter, the head of the Central Intelligence Agency (CIA), William Burns, flew to Moscow, and we all knew something was going on.

You asked me if Putin has changed.

I don't see a change in himself as a leader.

But I see a change in his behaviour.

Suddenly, he started acting in a very different way.

I think he saw an opportunity, and he wanted to use this moment to take everything that had been on his mind for years.

Sometimes, I think you should read it even when he refuses to answer.

■ To what extent do you think that sanctions will be harsh on Putin if Russian forces invade Ukraine?

Not to mention the fact that the West might be more united against him in this case?

■■ Of course, I don't know how much I appreciate the situation for Putin.

But Russia will pay a heavy price for it.

Sanctions will certainly have a significant impact on the Russian economy, especially in the long run.

• “I think Putin saw an opportunity, and wanted to use this moment to take everything that had been on his mind for years.”