To the melodies of the oud, the artist Ahmed Abdel Rahim entertains visitors to the Qatar pavilion, which is located in the sustainability area, giving guests of different nationalities the opportunity to learn about songs that are part of the culture of Doha and the Gulf region. Except 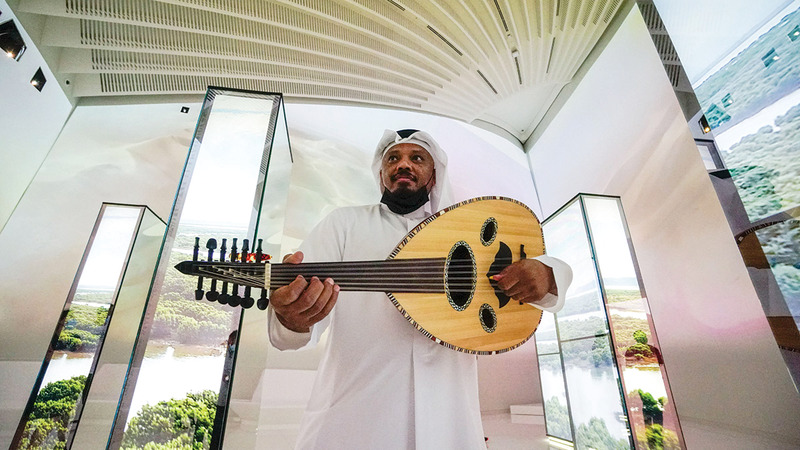 To the tune of oud, Itrb artist Ahmed Abdul Rahim, visitors to Qatar Pavilion, located in the area of sustainability, allowing guests of various nationalities the opportunity to learn the songs are part of the culture of Doha and the Gulf region.

The Qatari singer and composer told "Emirates Today" that his presence at the largest international event in the region, "Expo 2020 Dubai", is an extension of his career in participating in Expo exhibitions, most notably "Expo 2017 Astana", "Expo 2015 Milan", "Expo 2015". 2010 Shanghai", and "Expo 2008 Zaragoza".

Ahmed Abdel Rahim, who feels great pride and gratitude for participating in this exceptional event, was not satisfied that his artistic presence was confined to his country's pavilion only, as he extended it to other pavilions in the exhibition.

He added, "I participated in several musical events in a number of pavilions, Arab and foreign, most notably the pavilion of the Cooperation Council for the Arab States of the Gulf and the Iran pavilion, in addition to a performance with a Chinese band in which they were known for traditional songs, in addition to a participation that I will revive in the Argentine pavilion."

And about his artistic beginnings, Abdel Rahim explained that it dates back to the nineties of the last century, as he presented many works and albums that were successful and spread.

The artist, whose song “Bath of Love” in 1988 achieved great popularity, confirmed that he had a distinguished experience by composing artists from the old generation, such as the able artist Saqr Saleh, who composed two works, and from the younger generation he composed a work of artist Nayef Abdullah, in addition to composing private works. with it.

• Abdel Rahim was not satisfied that his artistic presence was confined to his country's pavilion only, as he went to other destinations in the international exhibition.

• “My presence in the largest international event in the region (Expo 2020 Dubai) comes as an extension of my career in participating in international exhibitions.”