Turn the page of the Council of the Islamic Religion.. Islam Forum in France Was he stillborn?

Twenty years after the formation of the French Council of the Islamic Religion and its representation of the Muslim community in the country and its being the official interlocutor of the state, the authorities folded his page and announced his death, by establishing the “Islam Forum.” 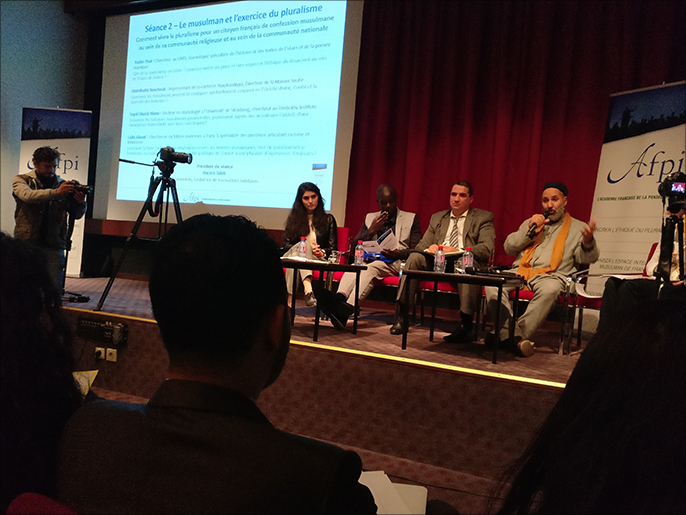 - 20 years after the formation of the French Council of the Muslim Faith and its representation of the Muslim community in the country, and its being the official interlocutor of the state, the authorities folded his page and announced his death, by establishing a new structure called the "Islam Forum in France".

Last December, French Interior Minister Gerald Darmanan announced that the French Council of the Muslim Faith had "died", especially after the paralysis that afflicted its structure and organs as a result of internal conflicts and the interventions of foreign countries.

As for Mohamed Moussaoui, the head of the council, whose term expired on January 19, he said earlier that this institution is "no longer viable" and should dissolve itself, but in return he stressed the great role that the council has played over the years.

The French Council of the Muslim Faith, known as CFCM, was founded in 2003 by then-Interior Minister Nicolas Sarkozy, and for two decades constituted the official and sole interlocutor of the French authorities. such as Algeria, Morocco and Turkey.

According to the latest official figures provided by the authorities, there are 2,500 mosques in France, but only less than 50% of them are affiliated with the French Council of the French Religion, and about 400 imams of a mosque are active on French soil, according to Muhammad Hanish, head of the Union of Islamic Associations in the region. Paris.

Hanish added to Al Jazeera Net that these imams are distributed among 120 Algerian imams, 30 Moroccans, and 150 from Turkey.

And last week, about 100 active personalities and representatives of the Islamic religion, in the presence of the Minister of the Interior, Gerald Darmanin, in charge of relations with religions, met within the framework of the "Islam Forum in France", the new body formed by the state to ensure a more legitimate and effective representation of the second largest religion in the country.

For his part, Shams El-Din Hafeez, the dean of the Grand Mosque of Paris, pointed out that the French Council of the Islamic Religion lost its value and the characteristics of its existence some time ago and no longer has an actual place as an official representative of the Muslims of France, and therefore "his execution by the authorities is expected and natural."

He added to Al-Jazeera Net, "The council in the recent period no longer lived up to the expectations of Islamic societies and actors in Islamic affairs in France who left it and left it without return, and therefore a new structure had to appear to serve the issues of Muslims in France."

In local media statements last week, French Interior Minister Darmanan again drew attention to the "very strong interference of foreign countries" in the affairs of this institution, and stressed that "this cannot be accepted," noting at the same time that "the Council is no longer performing its role, although it Live for a while, try to do something positive."

While the dean of the Paris Mosque noted that the issue of consular Islam - in reference to the attraction of diplomatic missions to control the Council - is a wrong issue from the ground up, because the associations and mosques are not the ones who brought the foreign countries to the Council.

He stressed that it is against the theory of consular Islam, because it was the French authorities that sought the help of the Arab Islamic countries when this council was formed, not the imams or associations.

However, he added in the end, explaining that he understands the position of the French authorities in their unwillingness to continue cooperation with these countries and to bring in imams from abroad.

He stressed the need to "turn the page of the past in order to work on creating a French Islam through the formation of imams on French soil, and preparing them to take their role instead of imams coming from abroad."

For his part, Saleh Muhammad Attia Imam and head of the Al-Rawda Mosque Association in the city of Stan, affiliated with Saint-Denis, indicated that the French Council of the Islamic Religion under the leadership of Dr. Muhammad Moussaoui was playing an important and effective role, and this is not denied by anyone, but it is noticeable since the start of the Corona crisis and the approaching date of the French elections that the pressures abounded on him And Muslims in general.

He added to Al-Jazeera Net, "I think that this falls under the restriction on Muslims by the separatist law and the new imams project, as well as the abandonment of the council."

Hanish returns to say that the improvised manner in which the council was executed is not surprising, "and it gives an idea and explains the period of political violence we are living in in France."

He added to Al Jazeera Net that the decision to dissolve the French Council of the Islamic Religion falls within the framework of a decision taken two years ago to marginalize and limit the Islamic religion in France in all ways.

He explained that in this context, the council's dissolution did not come within the framework of implementing the separatist law, but rather in the comprehensive political decision that was taken a while ago, and here we can also put the beating of mosques, the ban on the veil, the restrictions on imams and all activities against Islam.

The new forum is made up of organization officials, imams, and people involved in local Muslim communities, who make up two-thirds of its members, and the remaining third are chosen from personalities with national representation.

The French authorities chose the field actors from lists prepared by the local authorities, following conferences held in various French provinces in 3 phases in 2018, 2019 and 2020.

At the end of the forum, these groups and personalities shared the summaries of the work they started weeks ago and included 4 major axes such as the role of imams, preparing a structure for organizing religion, protecting places of worship from anti-Muslim acts, and implementing the anti-separatist law that was approved last summer.

Among the personalities who participated in the forum were the dean of the Grand Mosque of Paris, Shams Al-Din Hafeez, the former president of the French Council of the Muslim Faith, Anouar Kbibash, the dean of the Lyon Mosque, Kamel Kabtan, and the thinker Hakim Karoui.

Regarding his conception and vision of the structure of the new forum institution, Shams al-Din Hafeez, the dean of the Paris Mosque, affirmed that he is against restoring the old style and hierarchical structure of the old council.

He called for the adoption of a new methodology and structure that relies on competence only in selecting Muslim representatives, and that departs from the logic of leadership rejected by the true Islamic religion.

As for the head of the Union of Islamic Societies in the Paris region, which includes in its ranks more than 30 associations and mosques, he questioned the sincerity and success of such a big project at such a time and two months away from the presidential elections, in addition to the charged and tense general atmosphere in light of bids, accusations and daily attacks on Muslims in Media by election candidates.

He continued, "It is unknown and that its establishment came in the absence of coordination with active associations, mosques and Muslims in reality. Accordingly, I believe that his decisions, if taken in the future, will remain ink on paper, because he is simply a dead child and has no future."