Muslims in India .. Accusations of the police killing a young Muslim and a monk spreading hate speech, and protests in America and Turkey against the ban on headscarves

Angry campaigns spread on the communication sites in India, after announcing the death of a Muslim young man due to torture in a police station, while activists in America and Turkey organized vigils against the ban on headscarves for female students in India. 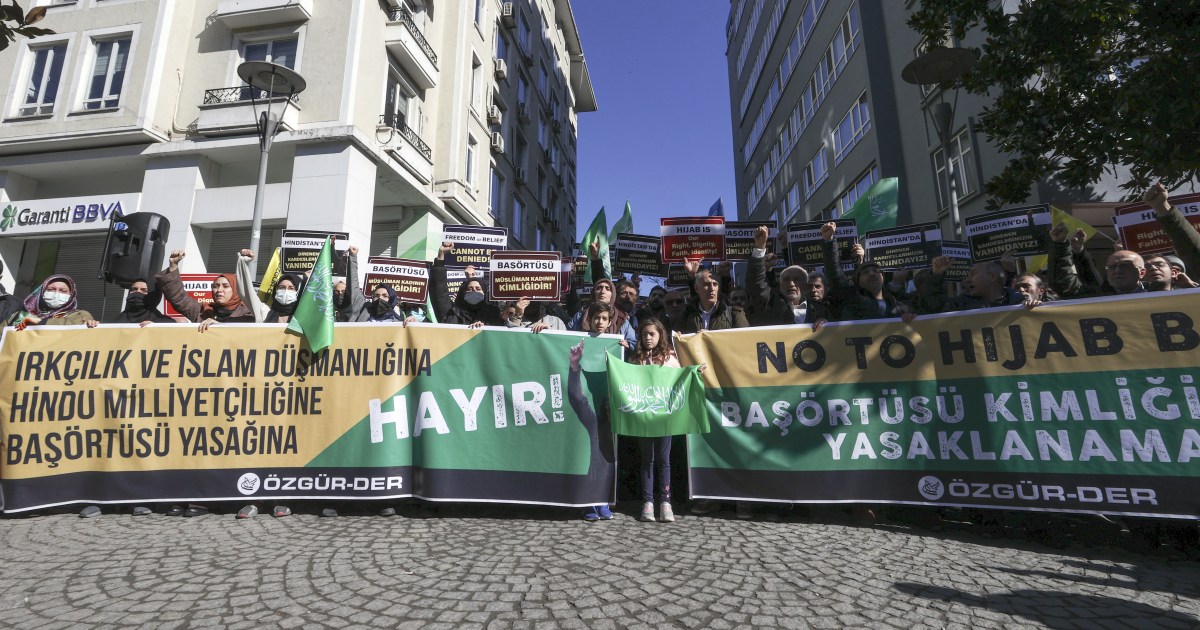 Angry campaigns spread on social media in India, after announcing the death of a Muslim young man due to torture in a police station, as well as with a Hindu monk calling for a state free of Muslims, while activists in American cities organized vigils against the ban on headscarves on female students in India.

And during the past hours, the hashtag (#JusticeForZeeshanMalik) "Justice for Zeeshan Malik" has topped the communication platforms in India, to demand an investigation into the death of the 19-year-old Muslim youth Zeeshan Malik.

On November 20, the Indian capital, New Delhi, arrested Malik on charges of stealing a pack of cigarettes, and he was imprisoned.

According to the local Maktoob Media platform, the police did not inform the young man's family about the legal procedures he was supposed to undergo.

According to the platform;

Zishan's family received a phone call from a police officer telling them that their son was sick and was taken to the hospital and asking to see them;

But upon their arrival, they discovered that he had died of illness in prison.

The pictures circulating on the communication platforms show traces of wounds, scars, bruises and stitching of a long wound. The Maktoob Media platform reported that some of the ribs and bones of Malik's feet were broken, which prompted his family to deny the police account and accuse it of torturing their son to death.

While the police authorities say Malik died due to illness, his family alleges custodial murder in Tihar Jail and cite bruise marks and broken bones as proof.

The case aroused public opinion, as activist Samir Ansari criticized the incident, and expressed the unsafe situation in which India's Muslims had reached by saying, "Muslims are not safe in their homes, nor on the streets, not even in prison under the supervision of the police."

In a topic related to the campaign against Muslims, Hindu monk Yati Narsinganand sparked widespread anger on the communication sites after circulating a video in which he pledged to build an Indian state without mosques, Muslims or Islamic schools.

The Hindu monk was arrested for his demand to cleanse India of Muslims last November, during a conference held in the city of Haridware in the state of Uttarakhand, and then re-talked about hatred towards Muslims during a press interview after he was released on parole a few days ago. .

Activists and journalists said that the monk got his release after pledging he would not repeat hateful statements, prompting them to demand his arrest again.

Yati and his troupe alone has been and will be associated with radicalising more Hindus and Muslims of South Asian & Indian heritage than anyone else https://t.co/zhFsGdBvPI

Anger against the ban on headscarves

On the other hand, the American Indian Muslim Council organized vigils against the decision to ban Muslim students from wearing the headscarf in universities and schools in the Indian state of Karnataka.

The council published several pictures of the vigils in the cities of Boston, Chicago and Dallas, in which activists of different nationalities participated.

Yesterday, hundreds of Indian-Americans and allies protested in Dallas, Texas against the hijab ban in India's Karnataka state.

In Istanbul, a crowd of activists and citizens gathered in front of the Indian Consulate on Sunday, raising banners and chanting slogans denouncing the harassment of Muslim students in Karnataka.