Dogs to combat anxiety when minors testify in court

Cuba and Eika. Eika and Cuba. Seeing a dog walking through a courthouse is still an unusual sight, but these two Labradors have already become old acquaintances of... 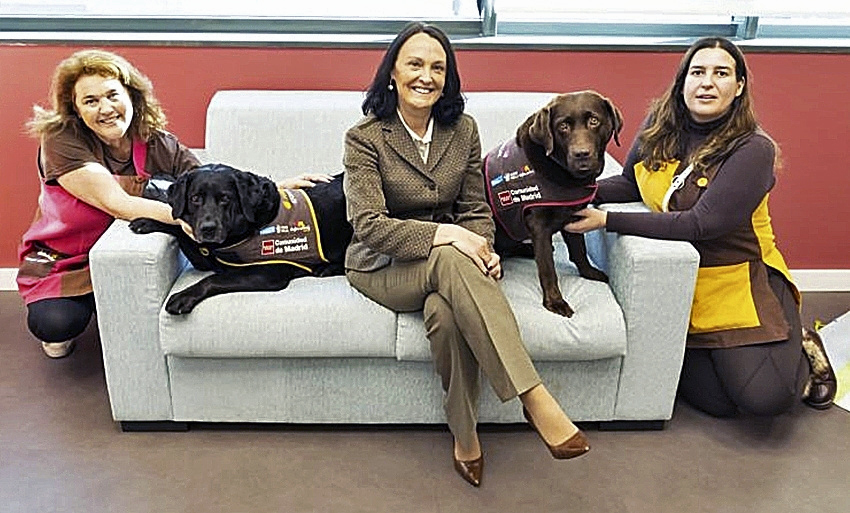 Seeing a dog walking through a court is still an unusual sight, but these two Labradors have already become

They arrive, they get on the sofa, they suck and, above all, they accompany.

They are the support dogs that help reduce anxiety in children who have to testify in court.

This initiative of the Community of Madrid aims to achieve

a more reliable declaration of the minor

who has been a victim or witness of abuse or a case of violence.

With the help of the animal, the children manage to

calm their stress in the courts

, which are usually very intimidating places for the majority of the population.

“When minors are afraid, they block themselves.

With this measure we try to make the dog become an emotional support and a protective wall for the minor, in such a way that he relaxes and manages to describe his experiences with the greatest number of details », explains Yolanda Ibarrola, Deputy Minister of Justice and victims.

The idea began with a project by Vanessa Carral, a psychologist and also co-director of Dogtor Animal, who investigated the effects of dogs

when they accompanied kids in court.

After seeing the results of the investigation, the Department of Justice decided to implement a pilot plan in 2014,

given the initial suspicion of the judges

who did not welcome the entry of dogs into the courts.

However, the measure has been increasing and so far this year eight petitions have already been made to carry out this process, which is requested in

the victim attention office of the courts

The proposal must have the approval of all parties to the case: the judge, the prosecutor, the lawyers and, of course, the family.

the intervention of the dogs

begins , which receive specific training and, at first, are accompanied by another dog that has been in the field for longer.

When the minor enters the court, he is nervous because he knows that he is going to have to

In that first moment, the encounter with the dog is prepared so that the child begins to play with it and build an emotional bond.

In this way, the boy focuses his attention on the animal and forgets about the statement.

and he is usually the one who takes the reins of the dog to go testify.

The minors do not testify in a normal room, but rather in the so-called Gesell Chamber, which is a more welcoming environment for them.

Yolanda Ibarrola, Deputy Minister of Justice, with the employees of Dogtor Animal and the two dogs.AN

The room is colorfully painted and has a table with games and a sofa,

There, the child is questioned by a psychologist or a social worker in a simpler language than the judicial one.

In an adjoining room, the judge and the lawyers can observe the statement through a spy-mirror without the young man seeing them.

In fact, they are connected to the psychologist by an earpiece in case they need any clarification.

It is at this moment that

the dog lends its maximum support

and many children tend to hug or caress it while they gain confidence during the hard moments of the testimony.

the helplessness of the boys

when they went to the Leganitos police station.

For this reason, she has been working on this initiative for years and from her company Dogtor Animal performs animal-assisted interventions and therapies.

“Being part of a change in the judicial system is incredible.

We help minors who are reliving traumatic situations.

It is the first time they hear each other and

many times they collapse

and hug the dog, which becomes his emotional mattress », indicates Carral, who carried out these therapies with dolphins and sea lions in Australia.

All this is part of the Ministry's initiative to

, which is why there is also a nursery in the facilities so that battered women can leave their children while they carry out some procedure and, in this way, see the courts as a friendliest institution.