How effective are China's ecological civilization and the construction of a beautiful China? Blue sky and white clouds have become the norm

China News Service, February 18. How effective has China's ecological civilization and construction of a beautiful China been since the "13th Five-Year Plan"? What harvest does the Green Winter Olympics bring us? Wang Jinnan, academician of the Chinese Academy of Engineering, dean of the Environmental Planning Institute of the Ministry of Ecology and Environment, and chairman of the Chinese Soci 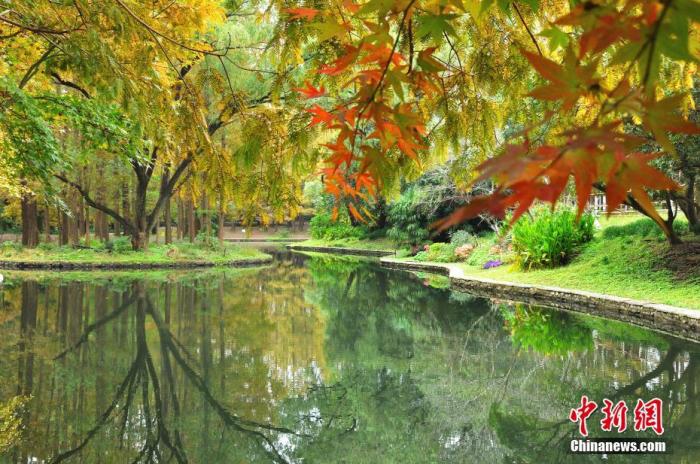 China News Service, February 18. How effective has China's ecological civilization and construction of a beautiful China been since the "13th Five-Year Plan"?

What harvest does the Green Winter Olympics bring us?

Wang Jinnan, academician of the Chinese Academy of Engineering, dean of the Environmental Planning Institute of the Ministry of Ecology and Environment, and chairman of the Chinese Society of Environmental Sciences, introduced at the special press conference of the Beautiful China Green Winter Olympics held on the 18th that in the past five years, China has become the world's leading energy source using new energy and renewable energy. In a country with the largest energy source, blue sky, white clouds, and twinkling stars have become the norm, and the scene of clear water, green banks, and fish flying on shallow bottoms has increased significantly.

According to the data observed by NASA in the United States, about 25% of the new green area in the world since 2000 has come from China.

China's ecological and environmental protection has achieved a historic, turning and comprehensive leap

Wang Jinnan introduced that China's ecological environmental protection has changed from the early treatment of "three wastes", to the treatment of key polluted cities, to "three rivers, three lakes, two districts, one city and one sea", to the reduction of the total amount of pollutants, to the improvement of environmental quality, and to three major actions Planning and the tough battle of pollution prevention and control, and then to the goal of achieving a Beautiful China by 2035 proposed at the 19th National Congress of the Communist Party of China in 2017, especially in the five years of building a Beautiful China since the 13th Five-Year Plan, China's ecological and environmental protection has achieved historic , a turning point, a comprehensive leap.

China's ecological and environmental protection is entering a critical period of focusing on carbon reduction, promoting synergy of pollution reduction and carbon reduction, promoting the comprehensive green transformation of economic and social development, and realizing the improvement of ecological environment quality from quantitative change to qualitative change. A new journey of modernization with harmonious coexistence of nature, blue sky, clear water, pure land and green space in beautiful China.

In the past five years, the construction of Beautiful China has made progress in stages.

In the past five years, the green development has gradually achieved results. The proportion of coal consumption in energy consumption has dropped to about 56%, and the proportion of clean energy has risen to 25.3%. The installed capacity and power generation of photovoltaic and wind energy, and the production and sales of new energy vehicles all rank first in the world. In 2021, the sales volume of new energy vehicles will increase by 1.6 times year-on-year, accounting for more than half of the world's sales, making it the world's largest country using new energy and renewable energy.

Data map: The picturesque corner tower of the Forbidden City under the blue sky and white clouds attracts tourists to take pictures.

In the past five years, the quality of China's ecological environment has continued to improve.

From 2017 to 2021, the concentration of fine particulate matter in cities at the prefecture level and above will drop by 25%, the proportion of good days will increase by 4.9%, and the number of days with heavy pollution will drop by nearly 40%. Blue sky, white clouds, and twinkling stars have become the norm.

The level of soil safety utilization has been steadily improved, the red line for ecological protection has been initially delineated, and large-scale land greening activities have been continuously carried out. The forest coverage rate has reached 23.04%. According to the data observed by NASA in the United States, about 25% of the new green area in the world since 2000 came from China. , the overall stability of the ecosystem pattern and biodiversity protection has retained more birds and flowers and rural scenery for the common people.

The common people's sense of happiness and recognition of blue sky and clear water has risen sharply, creating a successful practice of the largest developing country in the rapid economic and social development while effectively protecting the environment.

In the past five years, the modern ecological environment governance capacity has been continuously improved.

The system of main functional areas has been gradually improved, the central ecological and environmental protection inspector has developed in depth, the environmental governance systems such as pollutant discharge permits, ecological compensation, and prohibition of foreign garbage from entering are accelerated, and the system of “four beams and eight pillars” for ecological civilization has basically been formed.

At the same time, it actively participates in global environmental and climate governance, and makes a solemn commitment to strive to achieve carbon peaking by 2030 and carbon neutrality by 2060, and incorporate "double carbon" into the overall layout of ecological civilization construction and high-quality development.

Data map: Beijing Winter Olympic Park is adjacent to Shougang Park, and the ski jumping platform and Shougang Bridge complement each other.

The Chinese government has fully implemented the green Olympic measures, fully renovated and utilized the original Olympic venues such as the Bird's Nest, Water Cube, and Wukesong, and added new venues to reduce the impact on the environment from the design source. An avenue speed skating hall that uses carbon dioxide transcritical direct cooling system to make ice, with carbon emissions approaching zero; all venues for the Winter Olympics meet green building standards, and 100% of conventional energy uses green electricity.

The energy-saving and clean energy vehicles of the Winter Olympics accounted for 84.9% of all the vehicles guaranteed during the competition, the highest in the previous Winter Olympics.

Through the use of a large number of photovoltaic and wind power generation, local donations of forestry carbon sinks, and corporate sponsorship of certified carbon emission reductions, the Beijing Winter Olympics has successfully fulfilled its commitment to achieving carbon neutrality. neutralization" of the Winter Olympics.

Reports from relevant media and authoritative magazines have also confirmed this, as China hosted a "green" Winter Olympics, demonstrating its leadership in green technology.

In the past five years, Beijing, the city of double Olympics, has created a world miracle in air pollution control in megacities in terms of air quality improvement.

Since the 2008 Beijing Olympics, we have worked tirelessly to control air pollution in Beijing and the Beijing-Tianjin-Hebei region.

Improving the quality of Beijing's ecological environment, especially the air quality during the competition, is also a solemn commitment made by China when bidding for the Winter Olympics.

By fighting the tough battle of pollution prevention and control, a series of major measures for ecological environmental protection and governance have been taken, and the air quality in Beijing has been greatly improved. In 2021, all six major pollutants in Beijing will meet the standards for the first time, and the concentration of fine particulate matter will drop to 33 micrograms / cubic meter. Compared with 2017, the number of good days has dropped by 40%, and the number of good days has reached 288, an increase of 62 days compared with 2017. "Beijing blue" has increasingly become the norm, especially during the Winter Olympics, the air quality in Beijing has reached the best level since PM2.5 monitoring. There are days where PM2.5 concentrations are in single digits.

The United Nations Environment Programme spoke highly of the effectiveness of Beijing's air pollution control, and believed that it created the Beijing miracle of air pollution control in mega-cities, and provided experiences worthy of reference for cities in developing countries.

More than 20 kilometers west of here was the famous Shougang, which was relocated as a whole in order to improve the air quality in Beijing. It has now become the office of the Beijing Winter Olympics Organizing Committee and a big platform competition venue for freestyle skiing. The gorgeous transformation from "fire of steelmaking" to "flying of snow and ice" is a vivid practice and a beautiful landscape of green Olympics and beautiful China.

Wang Jinnan emphasized that, just like the spirit of the Beijing Winter Olympics explained by the theme slogan of the Winter Olympics "Together to the Future", China will take the Green Winter Olympics as an opportunity, follow the strategic deployment of ecological civilization and the construction of a beautiful China, focus on key points, make up for shortcomings, Strengths and weaknesses, in-depth fight against pollution prevention and control, accelerate the promotion of comprehensive green transformation of economic and social development, solidly promote carbon peaking and carbon neutrality, continue to improve the quality of the ecological environment, and promote ecological civilization and the construction of a beautiful China to a new level. At the same time, Make new and greater contributions to building a community with a shared future for mankind and building a beautiful earth home.