EU-AU: kick-off of the 6th summit to rethink the Africa-Europe relationship

Forty African Heads of State and Government and twenty-seven European leaders are meeting in Brussels, where the 6th EU-AU summit began on Thursday afternoon 17 February. An overhaul summit of the… 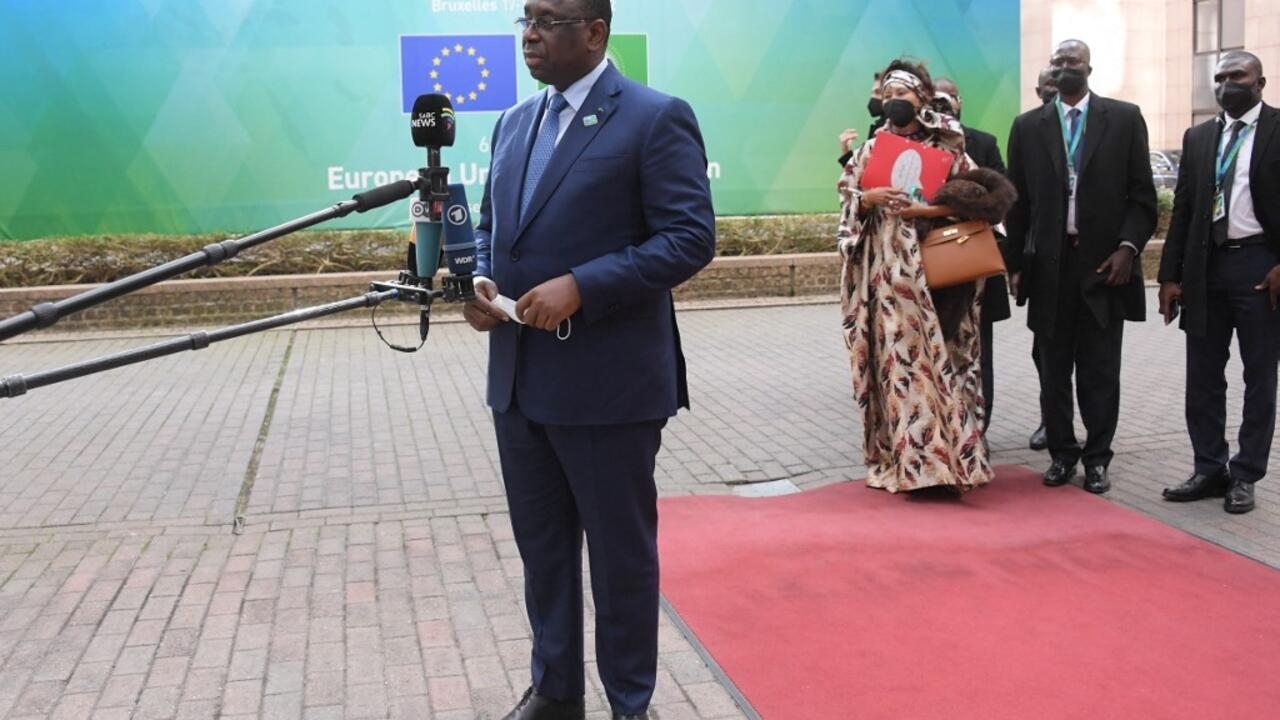 EU-AU: kick-off of the 6th summit to rethink the Africa-Europe relationship

Senegalese President and Chairman-in-Office of the AU Macky Sall speaks upon his arrival on the first day of the AU-EU summit, February 17, 2022. AFP - JOHN THYS

Forty African Heads of State and Government and twenty-seven European leaders are meeting in Brussels, where the 6th EU-AU summit began on Thursday afternoon 17 February.

A summit to overhaul the Africa-Europe relationship: the challenges and needs are colossal.

The leaders meet for two days around thematic round tables to develop a series of concrete projects in all areas.

The partners have drawn up some guidelines.

With our special correspondents in Brussels,

The first of the broad outlines relates to the very format of the meeting, seven round tables for a better exchange, a better listening.

This aspect was underlined by the President of the European Council Charles Michel and for the President-in-Office of the African Union Macky Sall.

It is indeed a question of co-constructing, of adopting a new software of relations between the two continents, "

We are not here to do business as usual.

We share a geography, the same languages, human, economic, cultural links and we also share a history, with successes but also with its share of pain.

The needs are immense.

The IMF estimates the continent's needs at more than 221 billion euros over the next three years to cushion the shock of the pandemic.

, a still indicative sum which will include public and private investments.

“The priority for us Africans is universal access to electricity”

On Thursday afternoon, the Heads of State and Government mainly talked about financing growth, climate change, digital or even energy transition.

On this last point, Macky Sall also said he expected a lot from this summit.

He repeated three times that 600 million Africans do not have electricity, even if Africa is committed to the Paris agreements and the Great Green Wall project.

Among the infrastructures to be developed, gas-fired power plants are, according to him, essential.

,” declared the Senegalese president, who at the same time made eight proposals to the Europeans.

Proposals to notably help the African economy or allow better access to vaccines against Covid-19.

The question of health will be on the menu of discussions this Friday morning February 18 and the big file of vaccine capacity should be the subject of announcements.

Europeans and Africans will also discuss migration, education and sustainable development, before the adoption of a joint declaration.

This is a new direction for this partnership, for very concrete things.

Anyway, there is a new situation in the world.

This very old partnership needs to be revitalized and it can only be appreciated by the results.

On the other hand, the evolution of the European commitment in the Sahel has not really been mentioned.

Although it was certainly discussed during the round table devoted to issues of peace, security and governance, it nevertheless took a back seat.

The discussion framework is indeed much broader and is not limited to security and Sahelian issues alone.

To read and listen: Will the Europeans convince the Africans with their new partnership?