“We have exhausted the tools of influence”: why the United States warned about the global consequences of sanctions against Russia

Anti-Russian sanctions that could be imposed in the event of the alleged “invasion” of the Russian Federation into Ukraine will have global consequences. This was stated by US Treasury Secretary Janet Yellen. She believes that possible restrictive measures will negatively affect both energy markets and the European allies of the United States. From the point of view of analysts, Washington has exhausted effective instruments of pressure on Moscow, and further tightening of restrictions will lead to undesirable results both for Europe and for the Americans themselves. 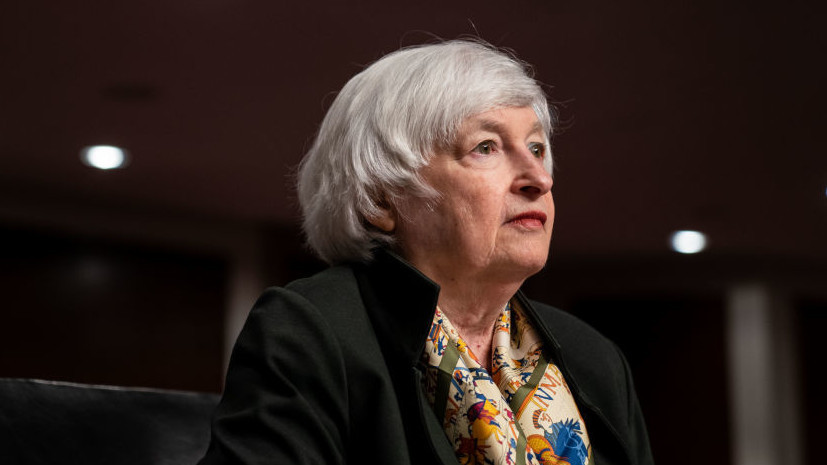 Sanctions imposed against Russia in the event of its hypothetical military invasion of Ukraine will have consequences for the global economy.

This was stated by US Treasury Secretary Janet Yellen in an interview with AFP.

“Of course, we want the sanctions to affect mainly Russia, but we recognize that they will have certain global consequences,” the minister explained.

According to her, US President Joe Biden "made it clear that in the event of an invasion of Ukraine, we intend to make Russia pay a significant price."

This is a “very significant package of sanctions that will have serious consequences for the Russian economy” and “could definitely include export controls,” Yellen explained.

However, the impending restrictions could have "potential implications for energy markets, given the important role Russia plays as a supplier of oil to the world market and natural gas to Europe," the politician said.

She added that Washington is working with "European allies to try, as far as possible, to insulate them from adverse effects" by providing "affordable supplies from other parts of the world" and "guarantees that oil and natural gas will continue to flow to Europe."

However, Yellen later added that no specific proposals from Washington, which would mitigate the consequences of possible new anti-Russian sanctions by the West, have been prepared for the European Union.

Waiting for the "invasion"

Recall that Joe Biden also spoke about the intention to impose extensive sanctions against Russia in the event of its “military aggression” against Ukraine.

“The United States and our allies and partners around the world are ready to impose effective export control sanctions, including measures that we did not implement when Russia invaded Crimea and eastern Ukraine in 2014.

We will put strong pressure on their largest and most significant financial institutions and key industries,” the US President said on February 15 in a special address on the situation around Ukraine.

The American leader promised that the US would introduce "long-term measures that would undermine Russia's economic and strategic competitiveness."

At the same time, Biden acknowledged that restrictions could have a negative impact on energy prices, including in the United States itself.

“I will not pretend that everything will be painless.

This may affect our energy prices, so we are taking active steps to reduce pressure on our energy markets and offset price increases,” the president said.

Recall that at the end of January, he promised that Russia would face a "catastrophe" in the event of its possible aggression against Ukraine.

Including, Biden said, Russian banks allegedly may lose the opportunity to conduct operations in US currency.

“We are in a situation where severe economic consequences are inevitable.

For example, everything that concerns the dollar - if they invade, they will pay, their banks will not be able to conduct transactions in dollars, ”he said, noting, however, that this would also have a negative impact on the United States and Europe.

At the same time, the United States made it clear that they do not plan to introduce preventive sanctions against the Russian Federation.

In particular, this was announced on February 13 by Pentagon spokesman John Kirby.

According to him, if large-scale anti-Russian restrictions are introduced now, they will “lose their deterrent effect.”

Meanwhile, according to analysts, all peripheral possibilities for sanctions against the Russian Federation have already been exhausted, and now the United States can only impose them in the most sensitive areas for Moscow.

“The United States has nothing left.

They will continue to use sanctions, as they still have an effective tool in their hands.

As long as the dominance of the dollar as a reserve currency continues, the United States will impose restrictive measures, ”said Yury Rogulev, director of the Franklin Roosevelt Foundation for the Study of the United States at Moscow State University, in a conversation with RT.

At the same time, large-scale restrictions that will also affect the economies of other countries are unlikely to be widely popular, the political scientist believes.

“Not all Europeans are satisfied with the US policy of pressure on Russia.

This is clearly not in the interests of Europe.

There are, of course, some “pioneer countries” in Eastern Europe that are “always ready,” but for most states, sanctions are not the way they approve,” the analyst says.

Note that in the EU, some politicians are not sure about the effectiveness of the anti-Russian sanctions campaign.

Thus, the Prime Minister of Hungary (part of the EU and NATO) Viktor Orban said that the EU sanctions against Russia have caused more harm to other states than to the Russian Federation itself.

“The policy of sanctions introduced against Russia has done much more harm to Hungary than to Russia.

Russia has built import substitution in areas where we used to supply our goods.

We have lost the market,” Orban said on February 1 following a meeting with Vladimir Putin in Moscow.

The Hungarian prime minister stressed that the sanctions policy is having the opposite effect as Russia adapts its economy to the restrictions.

As HSE professor Dmitry Evstafiev noted in an interview with RT, the statements of US Treasury Secretary Yellen and Joe Biden about the possible consequences of sanctions against the Russian Federation indicate that the American side is not able to carefully calculate them.

“The US does not really know what the consequences of a super-tough wave of sanctions will be.

The first wave, associated with personal sanctions against the President of the Russian Federation and its top leadership, restricting the activities of individual companies in the investment field, will have negative consequences for the global economy (including Washington), as it will affect the interests of investment funds.

At the same time, they can no longer calculate the consequences of the second wave, which involves a ban on trading in Russian hydrocarbons, disconnection from the SWIFT system, ”the expert explained.

The implementation of US threats in full can lead to the most serious consequences for the global economy, Yevstafyev believes.

“Most likely, the main consequence of these sanctions will be the global financial crisis, which will primarily hit the dollar as the main investment instrument,” the expert believes.

From his point of view, Washington seeks to shift the main burden of the consequences of anti-Russian sanctions on its allies in Europe.

“The strategic plan of the US administration is that the Europeans will have to pay for sanctions against Russia: switching to the purchase of American shale hydrocarbons, withdrawing investment assets from the Russian economy and transferring them to the dollar, introducing restrictive measures on Russian financial presence, ousting Russian money from banks and so on, ”says Evstafiev.

He also stated that by now the Biden administration has used up all other ways to build relationships with the Russian Federation.

“Only a strong leadership can compromise with Russia, and a leadership that clings to power and is likely to suffer a catastrophic political defeat before the end of this year can only move forward.

Sanctions are like a bicycle: if you stop, you will fall.

In a sense, the United States has exhausted the instruments of influence on Russia that were safe for them.

Everything that they can use next is dangerous for Europe and, above all, for the Americans themselves, ”concluded the analyst.