Erdogan's visit to the UAE puts the Egyptian media in trouble

Tweeters criticized Amr Adib's speech towards Turkish President Erdogan's visit to the UAE, considering that he seeks with his last speech to satisfy all parties despite the conflict of interests between them, while the rest of the Egyptian media remained silent. 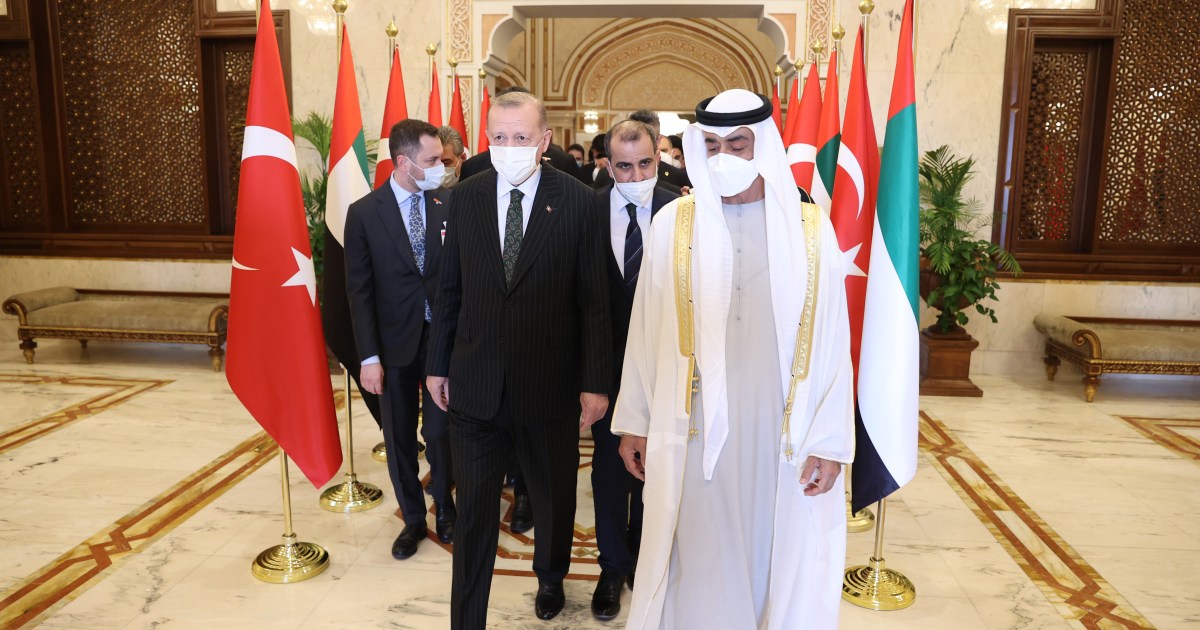 - Tweeters and media experts criticized Amr Adib's speech towards Turkish President Recep Tayyip Erdogan's visit to the United Arab Emirates this week, considering that he seeks, with his recent speech, to satisfy all parties despite the conflict of interests between them.

With the exception of Adeeb, the rest of the Egyptian media professionals remained silent about the visit, which called on followers to consider it a sign of Cairo's dissatisfaction with this Turkish-Emirati rapprochement, especially with what was reported in the media about a stumbling block in the Egyptian-Turkish rapprochement path.

Amr Adib: The people of the Brotherhood are workers. They say the UAE receives Erdogan.. Medicine and Erdogan, who demanded and went on his own

Amr Adib praised the visit, reviewing the song of the Emirati singer Hussein Al Jasmi, which he sang in Turkish in conjunction with the visit, although he was the most critical of the media to Erdogan and the Turkish government to the point of mocking the Turkish president and his government repeatedly, before the visit of Abu Dhabi Crown Prince Mohammed bin Zayed Al Nahyan to Turkey last November.

Adeeb stressed - in his program broadcast on MBC Egypt (owned by Saudi authorities) - that what has been happening in the region since US President Joe Biden took office is "games on a chess piece", pointing out that Erdogan's visit to the UAE is part of a major change. located in the area.

"The story is bigger than lighting the lights with the Turkish flag on the Burj Khalifa and Hussein Al Jasmi's song directed to the Turkish people," Adeeb said.

He added, "Welcome to every country that understands that relations are based on common interest and the exchange of political and economic relations and does not interfere in internal affairs and does not harm the interests of the other." He described him as "the possessor of an active ability", denying that his words stemmed from "compliment or interest, because the UAE does not need this talk from him," as he said.

Although the journalist close to the authority, Ahmed Musa, commented on Mohammed bin Zayed's visit to Turkey months ago, he remained completely silent about Erdogan's recent visit to the UAE.

During the previous visit, Moussa commented that "the Turkish media turned against itself to applaud the UAE after it considered it an enemy," and stressed that Turkey is in crisis due to the collapse of the Turkish lira, and that this crisis is behind the great reception of the Emirati crown prince, he said.

An invitation to retire

A professor of media at Cairo University Ayman Mansour Nada wrote an article a year ago entitled "Amr Adib between Continuing and Retirement," in which he pointed out that Amr Adib, "who represents the spearhead of the media spear in the current Egyptian media system, has lost much of his power... and that he is a good delivery channel, but it is Not a channel of influence.

A few days ago, Nada commented - in a post on his personal Facebook page - saying, "I could almost claim that Amr Adib committed suicide in the media, or they committed suicide, as some malicious people put it! Amr fell into the media taboo, and his prejudices preceded his experiences, and his interests overshadowed his professionalism, His loud voice lost its attractiveness due to the lean years, and Amr himself became a ridiculous media "joke" that there is no need or justification to listen to, even as a way to redress one's thoughts.

In a previous article entitled "The Media.. The Black Hole of the Regime," the media professor - who was arrested months ago for criticizing the media and released - indicated that "Amr Adeeb is a man of multiple loyalties.. he talks about Egypt, and Saudi Arabia pays him, and he has relations with the Emirates, and he serves Capable businessmen, and crying with the poor, one of the reasons for the loss of credibility is his transformations, movements and opinions that represent everything and vice versa.

Tweeters said that Amr Adib's volatility is no longer convincing, especially since what he was saying against Turkey and Erdogan is still remembered.

Others pointed out that the extrapolation of the scene indicates that Amr Adib and the rest of the media professionals may face a crisis in dealing with these changes due to their previous non-professional speeches.

Days have proven that my words were true and that the mob cursed me and accused me of treason because of my intervention with #Amr_Adeeb about the necessity of reconciliation between #Egypt and #Turkey, a year ago, they were just donkeys braying loudly, no more. https://t.co/nBcSK7uWpX

Amr Adib yesterday was Behendel and bless Erdogan's visit to the Emirates!

believe that Gomorrah is saying something from

Amr is not alone, by the way, any one who holds an iron and says any words in which channel he must back off before he comes out, nor will it remain!! ‼️‼️

Aaaaaah Amr Adib feels happy and presented the song and is very happy with the Turkish-Emirati relations?

Your instructions are now iron, exactly like Amr Adib Tammam, I regret it in Turkish and Israeli too. There are no longer in the Arab countries with opinion or creators except those who have the mercy of my Lord!!!!!!

After the ferocious media war between Turkey and the UAE and the political estrangement, relations returned to normal, and here I remind my media friends of those who were praying and touring their articles with my advice to them that political writing should be characterized by civility, calmness and foresight, otherwise you will come out with a dark face and failure in front of your readers.