Chocolate letters of apology .. a noble initiative at the "Expo Dubai"

An exceptional initiative was launched from the heart of Expo 2020 Dubai, aimed at addressing the phenomenon of cyberbullying, through a community campaign called "Chocapology" that seeks to raise awareness about cyberbullying and address negative behavior on the Internet. 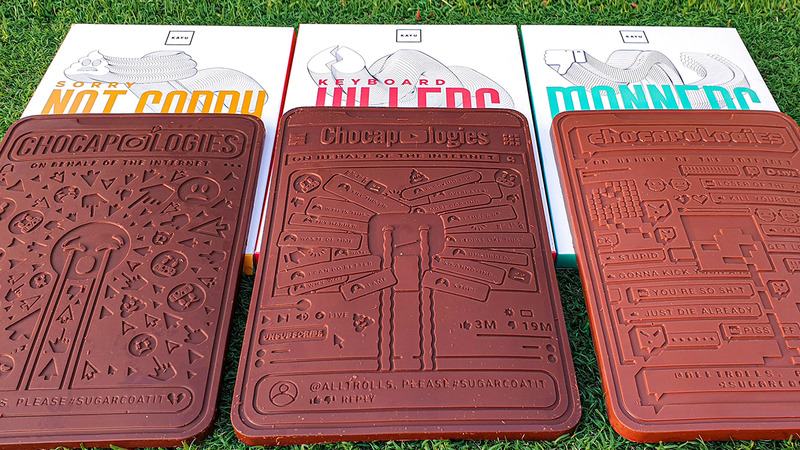 Chocolate letters of apology .. a noble initiative at the "Expo Dubai"

An exceptional initiative was launched from the heart of Expo 2020 Dubai, aimed at addressing the phenomenon of cyber-bullying, through a community campaign called "Chocapology" that seeks to raise awareness about cyber-bullying and counter negative behavior on the Internet.

The creative director of Mullen Law, which launched the initiative, Paul Banham, told "Emirates Today" that the campaign has lofty goals, the most important of which is the solidarity and solidarity of all members of society and its institutions to confront this outrageous behavior, and prevent it from happening among individuals, young and old.

He stressed, "We were keen to launch this initiative from the land of the UAE in particular, as it is always the first to confront and combat all forms of violence and bullying, and also focuses on confronting such global problems on cyberbullying, in addition to enacting many laws, legislation and regulations that address these behaviors, and presented The initiative in the heart of (Expo 2020 Dubai) will shed light on its goals and expand its impact.”

The campaign was launched with a main goal, which is to make the Internet a happier place for everyone, by designing bars of chocolate bearing messages of apology “on behalf of the Internet”.

The campaign worked with Lebanese chef Karim Burji to create chocolate creations through which he presented his vision of the campaign.

Borgy was able to design uniquely and distinctively woven apologies and graphics that address bullying behaviors.

The chocolate bars were produced, packaged and delivered to a number of victims of bullying around the world, and distributed to a number of social media influencers and celebrities in the United Arab Emirates. Chef Karim Burji designed three models for these chocolate messages: one to raise awareness about the effects of bullying. On the figure and the body, another highlighting hatred, while the third message highlights all forms of bullying.

Banham explained: “Through the campaign, we wanted to raise awareness of the effects of bullying, and to address those who prey on our children and cause them great pain. Suicide, and this is unfortunately the dark side of social media.”

He continued: "Bullying in all its forms constitutes a scourge that should be united in society to eradicate it, by spreading awareness and launching initiatives that would address these behaviors, as cyber-bullying has become the most severe and most dangerous type of bullying, due to its rapid spread through modern and advanced technology."

Banham indicated that “the campaign is valid on social media platforms, and has reached more than 261 million people so far, and it continues to spread and expand, and what started as an initiative has now become a large campaign that delivers messages of love and positivity to victims of bullying, as it contributed to making the Internet It is a nicer place indeed, as choosing these messages of chocolate comes with the aim of bringing joy and happiness to the souls of the victims of bullying. Chocolate has many positives, as it affects mental health, adjusts mood, and reduces depression.”

Regarding the importance of collective action, Banham said that “the responsibility lies with everyone, individuals and institutions, to address all possible means to combat these pests in an interdependent manner.”

Girls come at the forefront of people who eat chocolate of all kinds, in many psychological situations and situations related to certain psychological conditions, as they resort to eating it as a means of treatment.

Studies show that three out of five children are bullied on social media platforms, and seven out of 10 young people are bullied online before they reach the age of 18.