The President of the friendly Republic of Turkey, Recep Tayyip Erdogan, in the presence of His Highness Sheikh Hamed bin Zayed Al Nahyan, member of the Executive Council of the Emirate of Abu Dhabi, met with representatives of a group of major Emirati companies. The meeting, which took place yesterday, at the Emirates Palace Hotel, dealt with prospects for cooperation and joint investments in 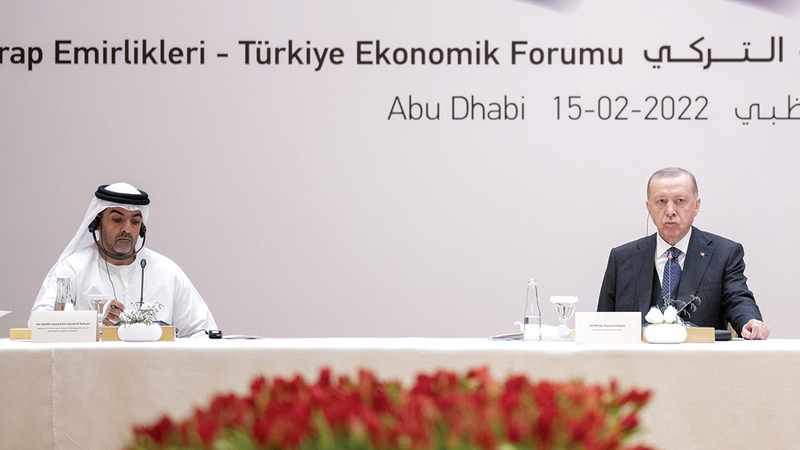 In the presence of Hamed bin Zayed

The President of the friendly Republic of Turkey, Recep Tayyip Erdogan, met, in the presence of His Highness Sheikh Hamed bin Zayed Al Nahyan, member of the Executive Council of the Emirate of Abu Dhabi, representatives of a group of major Emirati companies.

The meeting, which took place yesterday at the Emirates Palace Hotel, discussed the prospects for cooperation and joint investments between the UAE and Turkey, and ways to expand partnership areas and increase the volume of trade and investment flows, which contributes to promoting economic growth in the two countries.

In a speech at the beginning of the meeting, His Highness Sheikh Hamed bin Zayed Al Nahyan welcomed the Turkish President and his accompanying delegation in the UAE, and said that the bilateral relations between the two friendly countries are witnessing rapid positive developments, which open new horizons for cooperation and joint work between the UAE and Turkey in all areas that It serves their mutual interests, thanks to the strong will and the joint forward-looking vision of the leaderships of the two countries aimed at a brighter and more prosperous future.

In his speech during the meeting, which was attended by representatives of more than 25 Emirati companies, His Highness stressed that the economic relations between the UAE and Turkey are witnessing continuous development and growth in the sectors of trade, investment and other sectors of common interest, and is able to move forward towards broader horizons and broader partnerships of cooperation and joint work. In various fields that enhance the development process in the two countries.

His Highness added that the volume of trade and investment exchange between the UAE and Turkey is witnessing an increasing growth, which is a clear indication of the positive trend taken by the economic partnership between the two countries, pointing out that there are solid foundations for trade and investment relations between the UAE and Turkey, and we seek in this meeting and what will result from it. Opportunities for partnership and cooperation to build upon to be a starting point for further growth and prosperity.

His Highness reviewed the indicators of trade and investment between the UAE and Turkey, noting that the non-oil intra-regional trade between the two countries achieved a record jump during 2021, recording $13.7 billion, a growth of 54% compared to 2020, and an increase of 86% compared to 2019, pointing out that Turkey is the partner. The seventh trade in the world for the UAE, with a share of 3% of the country's non-oil foreign trade, and the UAE is among the 12 most important trading partners of Turkey globally.

Regarding mutual investments, His Highness Sheikh Hamed bin Zayed Al Nahyan said that the UAE is among the 15 most important investing countries in Turkey, with investments amounting to five billion dollars at the end of 2020, as sovereign funds and Emirati companies invest in many vital sectors in the Turkish markets, while The value of Turkish investments in the UAE reached $310 million at the end of 2019.

His Highness added that it is expected that mutual investments as well as intra-regional trade will witness remarkable growth in the coming years, supported by the strong and competitive economic environment rich in opportunities, ingredients and integrated investment incentives enjoyed by the two countries, and that the meeting between the Turkish President and representatives of major Emirati companies confirms the keenness of the UAE leadership to Expanding the horizons of cooperation and economic partnership between the two countries to bring them to broader levels for the benefit of the two friendly peoples.

For his part, Turkish President Recep Tayyip Erdogan stressed, during the meeting with representatives of Emirati companies, that a new era began in Turkish-Emirati relations with the visit of His Highness Sheikh Mohamed bin Zayed Al Nahyan to Turkey last November, and that the two countries have a strong common will to develop relations. Especially business and investment.

He added that the UAE is Turkey's main trading partner in the Arab Gulf region, and our goal is to raise bilateral relations to higher levels in all fields, especially since these relations have a deep-rooted history and are based on a strong infrastructure.

The Turkish president touched on the participation of his country and the UAE in the interest in technology, which provides an opportunity for cooperation and integration between them in this field.

His Excellency pointed out that Turkey has 85 million people, rising industrial production, a strong infrastructure, in addition to an important geographical location, and that the "Corona" pandemic showed the strength of the Turkish economy during the past 20 years.

He stressed that Turkey offers privileges to foreign investors, which made the interest of international investors in it increasing, pointing out that his country has attractive legislation to support business and investments.

He added that the will of the leaderships of the two countries is important to bring the relations between Turkey and the UAE to the required level, by laying the groundwork in which cooperation in all fields from trade to defense and from tourism to energy and transportation will rise at the same time.

At the end of his speech, the Turkish President expressed the readiness of the relevant institutions in Turkey to provide Emirati investors with all the information they want about investing in Turkey, wishing that the meeting with representatives of Emirati companies would be a good start for all.

"The UAE is Turkey's main trading partner in the Gulf region, and our goal is to raise bilateral relations to higher levels."

"The economic relations between the UAE and Turkey are witnessing continuous development and growth in the sectors of trade and investment."

The meeting dealt with prospects for cooperation and joint investments between the UAE and Turkey.