Between Bashagha and Dabaiba .. Where does Egypt stand? Did it coordinate with Turkey in Libya? (Question and Answer)

The recent developments in the Libyan arena, represented in the mixing of cards between the enemies and allies of yesterday, raise questions about the Egyptian role, and where Cairo's interests lie in light of the signs of Libyan division? Did Egypt coordinate with Turkey? 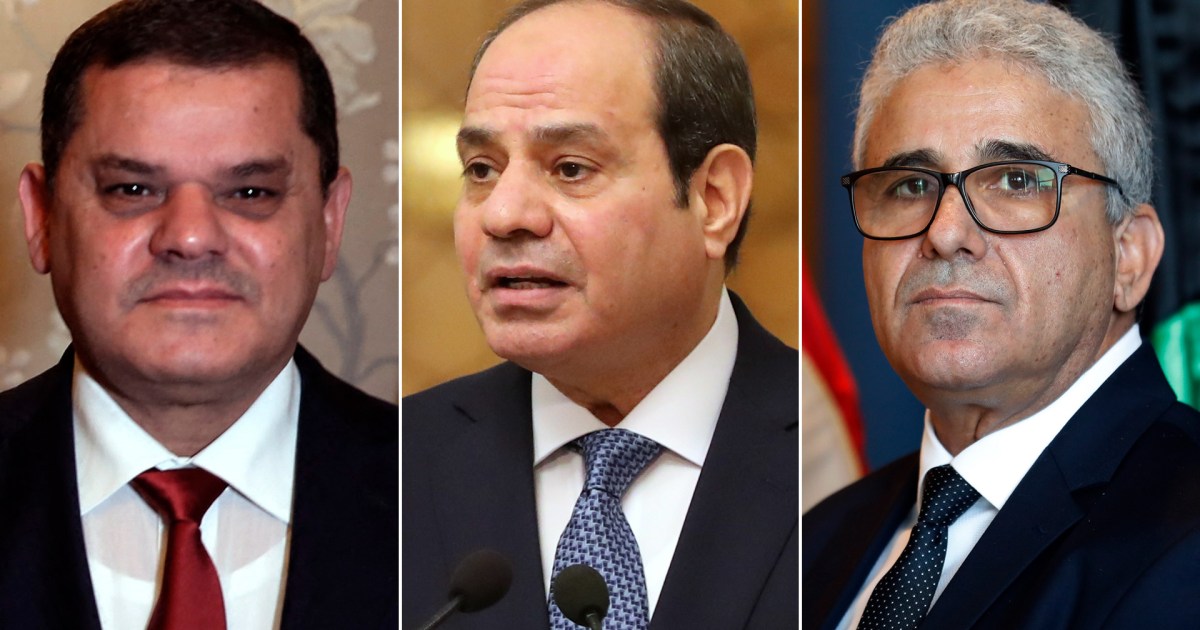 The recent developments in the Libyan arena, represented in the mixing of cards between yesterday's enemies and allies, raise questions about the Egyptian role, and where Cairo's interests lie in light of the signs of division among the western neighbor between two governments.

Did Egypt coordinate with Turkey in the tense file for years in order to reach a compromise formula?

In a surprising development, the Libyan House of Representatives, held in Tobruk (east) last Thursday, announced the selection of former Interior Minister Fathi Bashagha as prime minister to succeed Abdel Hamid al-Dabaiba, who rejected this step.

This atmosphere has caused a local state of political confusion, security mobilization, and differing statements between approval and rejection, while on the international side, the majority of the active forces in Libyan affairs are still holding the stick from the middle, without clearly cutting their position on the support of one of the parties.

These moves came after the failure to hold the presidential and legislative elections in late December, although they raised fears of signs of a crisis and a new division between two camps. However, the traditional divisions between Libyan actors currently seem unlikely, as Dabaiba himself has become a threat and a competitor to the majority of parties in a way that has strengthened their rapprochement. , according to indicators and observers.

And last Saturday, Egyptian Foreign Minister Sameh Shoukry said - in a press conference with his German counterpart - that Cairo is in contact with all Libyan parties to enhance stability, and that his country is interacting with its international partners to reach the elections that bring a legitimate elected government.

The statement came two days after Cairo announced its support for Parliament, the State Council and the government resulting from their alliance.

Al Jazeera Net seeks to answer questions about the dimensions of the current Libyan division in Egypt in light of the following questions:

Does Cairo support one party at the expense of another?

The official Egyptian position was decisive by supporting the decisions of the House of Representatives, as Cairo was at the forefront of the regional and international powers that welcomed the announcement of Bashagha as prime minister, while at the same time affirming communication with all parties, and that the course of settling the crisis remains in the hands of the Libyan people alone without foreign interference or dictates.

In this context, Ambassador Ahmed Hafez, the spokesperson for the Ministry of Foreign Affairs, praised in a press statement the role of the Libyan institutions and their assumption of their responsibilities, including the measures taken by the House of Representatives in consultation with the State Council in accordance with the Skhirat Agreement, bearing in mind that the Libyan House of Representatives is the elected legislative body. And expressing the brotherly Libyan people, who is entrusted with enacting laws and granting legitimacy to the executive authority and exercising its oversight role over them.

Commenting on this, the expert on African affairs and Egyptian national security, Major General Mohamed Abdel Wahed, explained that Cairo does not support a specific person, but welcomes any consensual person, as happened with Bashagha, indicating that there may have been Egyptian coordination with France, Algeria or Germany in this regard. , and perhaps also with Turkey, although unlikely.

In statements to Al-Jazeera Net, Abdel Wahed said that after choosing a consensual figure - as happened with Bashagha - Egypt can support him and create the international atmosphere - whether European or American circles - to accept him.

On the other hand, the Egyptian researcher specializing in Libyan affairs, Alaa Farouk, considered that the Egyptian role in Libya is still murky, explaining that there are indications that Egypt has a role in the formation of the Bashagha bloc, Khalifa Haftar (commander of eastern Libyan forces, retired Major General) and Aqila Saleh (President of the Tobruk Parliament / east).

In statements to Al-Jazeera Net, Farouk warned of the repercussions of negative interaction, which might bring Egypt back to 4 years ago when it was counted on a single faction, but he added that the Egyptian role in the western neighbor cannot be considered negative.

He explained that Egypt does not support Haftar as a person, but rather supports Haftar's bloc, Aqila Pashaga, and the latter is in the West and is very popular and has begun to aggressively market his new government as legitimate, and perhaps his step is the start in which Egypt began to support the parliament's decision.

According to security expert Abdel Wahed, Cairo is keen on activating the will of the Libyan people and efforts for security, stability and state sovereignty from many premises, including the depth of national security from the west and the long borders between the two countries, and any state of chaos and instability in the presence of mercenaries, armed groups and strong groups Extremism will affect the Libyan interior, he said.

He added that his country does not only support Bashagha, but other parties to maintain security and stability, and may encourage holding and holding elections as soon as possible, and although Bashagha, as affiliated with western Libya and has strong relations with Turkey, Cairo has found in him the right and strong man, and he has the consensus of all the parties.

An important sign stressed by the Egyptian security expert is that the election of Bashagha came after coordination between the Supreme Council of State, the Libyan Parliament and Haftar’s forces, a step aimed at unifying the Libyan ranks for the first time into a single army and internal security forces headed by Bashagha previously, and its affiliated forces and groups From the city of Misurata, which has its weight and weight, it may cooperate, and thus create a force that can impose security and is able to expel mercenaries and extremist groups, according to his description.

Also, the election of Bashagha - according to Abdel Wahed - is a good opportunity to continue the political track in parallel with the economic track and with the "5 + 5" group, a military committee that was formed equally between the military from east and west to establish a ceasefire, and may encourage it to expel and expel mercenaries and foreign forces, He may reach, by consensus, an end to the Libyan crisis at the earliest.

How will Cairo deal with two governments?

And what are the consequences of that?

In this regard, Abdel Wahed indicated that there are those who see Bashagha's election as a deepening of the crisis and division in light of Dabaiba's refusal to relinquish his position, warning of the danger of an armed conflict within the capital.

He also expected that all scenarios would be open in light of the differing views inside Libya about the process of Bashagha's election, and there is also a difference in the international community, including the United Nations, which still recognizes Dabaiba as the legitimate head of the government.

On the consequences of the division on Egyptian interests, he stressed that it is not in Cairo’s interest in light of the fears of chaos and the cost of securing the western borders to prevent the infiltration of terrorist and organized crime groups, and the anticipation of the presence of regional and foreign forces still in Libya, which negatively affects the Egyptian national security, in addition to the expansion of The negative repercussions on Egyptian labor in Libya, from which many returned to Egypt.

In addition, according to Abdel Wahed, there are projects previously contracted between Cairo and the Dabaiba government, but he expected to complete them with the new government, which welcomes the Egyptian role, as it has no ambitions in Libya, but is looking for stability and security, he said.

In agreement with the previous proposition, researcher Alaa Farouk said that the consequences of the Libyan division between two governments on Egypt are the impact on the agreements Cairo signed with the Dabaiba government, in addition to the repercussions on Egyptian workers.

Farouk pointed out that Egypt is dealing with the Libyan file in the recent period with a strategy that leaves a line of return, which was what appeared in Foreign Minister Shukri's statements a few days ago when he stressed his country's openness to everyone in Libya.

Has the Egyptian-Turkish rapprochement recently occurred in Libya?

According to Major General Abdel Wahed, all possibilities regarding coordination between Egypt and those interested in the Libyan issue are possible, as steps for coordination with external parties facilitate the achievement and imposition of security and stability in accordance with common interests.

With regard to Turkey, he pointed out that the selection of Pashaga came from the Libyan people represented in Parliament, and Egypt can support any strong government regionally and internationally and promote its policy, so that it imposes security and stability as soon as possible.

In turn, Farouk saw that Egyptian-Turkish coordination in the Libyan file is difficult to predict now, because Turkey is in a state of silence about what is happening, and has not announced its support for one party at the expense of another.

But he pointed out that the speed and abundance of coordination with Prime Minister Khaled Al-Mashri suggests that Turkey implicitly supports the step of forming a new government, especially since it has long since clearly moved away from the Dabaiba government, and it had great rapprochement with the Libyan East, with Haftar and Saleh, and opened its consulate in Benghazi, A delegation from its parliament visited eastern Libya.

This openness - according to Farouk - can be explained by the existence of understandings or calm between Turkey and Egypt in the Libyan file, and may reach full coordination if the Bashagha government is recognized or supported by the international community.