"Chicago Chinese Forum": Chinese in the Midwest of the United States pay attention to the Winter Olympics

Chinanews.com, February 15. "Chicago Chinese Forum" reported that on February 13, local time, Chicago Chinatown held a grand parade to celebrate the Chinese New Year. Although the temperature on the day was very low, it still attracted a large number of Chinese and foreign tourists and residents to come to watch, while many institutions and societies such as the Chinese Consulate General in Chic 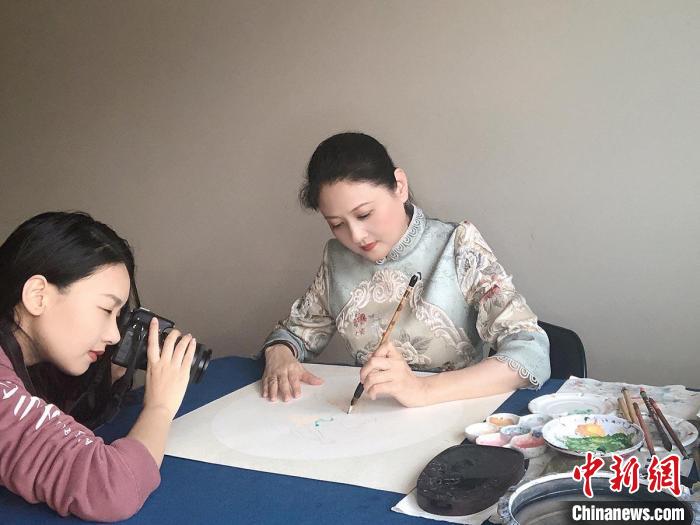 Although the temperature on the day was very low, it still attracted a large number of Chinese and foreign tourists and residents to come to watch, while many institutions and societies such as the Chinese Consulate General in Chicago, the Greater Chicago Chinese Association and the Guangzhou Association decorated or held "Bing Dun Dun" and The mascot of "Xue Rongrong" and the placard congratulating the success of the Beijing Olympics were particularly noticeable.

Zheng Zheng, chairman of the Hualian Association, said that publicizing and celebrating the Beijing Olympics is one of the most important themes of our parade this year, and it is also a new climax of our wave of praise for the Olympics.

In fact, for a period of time, the heated discussions and concerns of the Chinese in the Midwest of the United States about the Beijing Winter Olympics have been unusual.

Whether in the office, gym, school or social media, or at the recent Spring Festival Parade in North and South Chinatown, during the preparations for the Winter Olympics, the opening to the present and the intense competition, everyone's minds seem to be flying. Beijing, fly to the relevant activities and competition sites.

Eager anticipation, intense chasing, excitement and joy are intertwined. Around the 2022 Beijing Winter Olympics, it seems that the weather is freezing, and the snow-capped Chicago and the Midwest also continue to set off a "boom" of ice and snow.

Zhang Liping, a painter living in the United States, is photographed by Mulan, a student at the University of Illinois.

The vast majority of Chinese here commented on the Beijing Winter Olympics with various words of praise.

Some people say that this Winter Olympics is a first in the history of the Olympic Games to vigorously promote the true Olympic spirit in a green and low-carbon environment, against the background of overcoming the severe epidemic and repeated political noises.

Many people believe that the success of the Beijing Winter Olympics will be not only the host country, but also all participating athletes and ice and snow sports enthusiasts, and all people in the world who pursue and practice the goal of "faster, higher, stronger and more united". glory.

Wang Xingwu, chairman of the Greater Chicago Chinese Association, has been following the progress of the Beijing Winter Olympics.

"There are two pieces of news that really touched me," he said.

Seeing the four Chinese and American athletes smiling so sincere and pure in the group photo, so naturally, a warm feeling poured out of my heart.

Wang Xingwu said that the American table tennis player had mistakenly got into the car of the Chinese player, and the sincere and friendly exchanges between the Chinese players who presented the American players with brocade gifts created table tennis diplomacy and opened up decades of peaceful and friendly exchanges between China and the United States. The world brings priceless political and economic dividends.

Today, the people of China and the United States also need sincere goodwill like the athletes to treat each other kindly. The people of the two countries need to express their love, so that the development of the relationship between China and the United States will never be affected by those unique Those who advocate hatred with their hearts lead the wrong way. This is the real action and the right way to bring well-being to the people of the world.

The overseas Chinese from the Minnesota Overseas Chinese Association raised banners and wished the Beijing Winter Olympics a complete success in unison.

Liu Yingbin, an old overseas Chinese, has lived in the United States for nearly 30 years and has long served as a volunteer and leadership position in some societies.

He said that the holding of the Beijing Winter Olympics showed the Chinese people's spirit of solidarity and struggle to accomplish the great cause.

As the descendants of the descendants of Yan and Huang, we are proud of the success of the Beijing Winter Olympics, and we must carry forward the Olympic spirit to contribute to the healthy and stable development of Sino-US relations, the well-being of the Chinese and American people, and the realization of the great "Chinese Dream". share of strength.

This video won the first prize of the "Welcome the Chinese New Year, Celebrate the Winter Olympics, Let's Hi Everyone" campaign launched by the Chinese embassy and consulate in the United States.

Mulan said, my hometown is Beijing, which is also the first city with two Olympics in history.

We overseas Chinese at home and abroad should join hands with the people of our ancestral country to witness the victory and glory of the Beijing Winter Olympics!

Ms. Deng Qing, chairman of the Minnesota US-China New Art and Cultural Exchange Association, recalled the "Twin Cities Dumpling Banquet" that was successfully held by the association not long ago - the Spring Festival of the Tiger Year and the Beijing Winter Olympics Celebration Reception.

In his congratulatory letter, Minneapolis Mayor Jacob Frey said: "It is an exciting time for the 2022 Winter Olympics to be held in Beijing, China. I sincerely wish the athletes of China and the United States to be in the Beijing Winter Olympics. We will achieve excellent results!" said Representative Dean Philip of Mingzhou, "From the bright fireworks in Beijing to the "Twin Cities Dumpling Banquet" in Mingzhou, we are with you to celebrate the Beijing Winter Olympics and the Chinese Tigers. The arrival of the new year.”

Deng Qing, editor-in-chief of "Mingzhou Chinese World" and vice president of the Mingzhou Chinese Business Association, said that their speeches showed that the Olympic concept will never be used by politics, and the whole world should abide by the Olympic spirit of advocating equality and justice.

These U.S. officials and the world have clearly seen a bright, enthusiastic and positive picture of health since the Beijing Winter Olympics opened.

The Beijing Winter Olympics is a warm invitation to the world with an open and confident attitude after seven years of preparation by the home country. It is destined to be recorded in the Olympic history.

Dr. Li Rongshun, the principal of Fenghua Chinese School in Greater Chicago, said that the teachers and students of the school and the local Chinese community have paid special attention and often watched the Beijing 2022 Winter Olympics TV in recent days.

The students also had a lively discussion. Many students were infected by the athletes' spirit of "transcending themselves" and expressed that they should learn from the athletes and strive to create new achievements.

Li Rongshun said, "Watching the Beijing Winter Olympics program is very eye-opening and insightful. It is exciting and exciting to see the challenge to the limit of human athletic ability. Athletes' love for competitive events and their fearless spirit are an example for us to learn from. . We salute them from across the ocean!".

"If the sky is in love, the sky is also old, and the right path in the world is vicissitudes."

With all the events and activities of the Beijing Winter Olympics proceeding in an orderly manner and drawing to a close, many Chinese in the Midwest of the United States said that everyone will see that China will hold high the banner of the Olympic spirit and once again serve the Olympic movement around the world. Having made great contributions, China has fulfilled its solemn promise to the world.