Inspirational women who have faithfully served their country.. Celebrated at the "Dubai Expo"

Visitors to Expo 2020 Dubai stand intently in front of two original wooden sculptures at the entrance to the Guinea Pavilion, one of which is for an antique seat, and the other is a anthropomorphic animal that expresses the heritage and culture of this ancient African country. Then the visitor enters the pavilion to travel on an interesting journey through the past, present and future 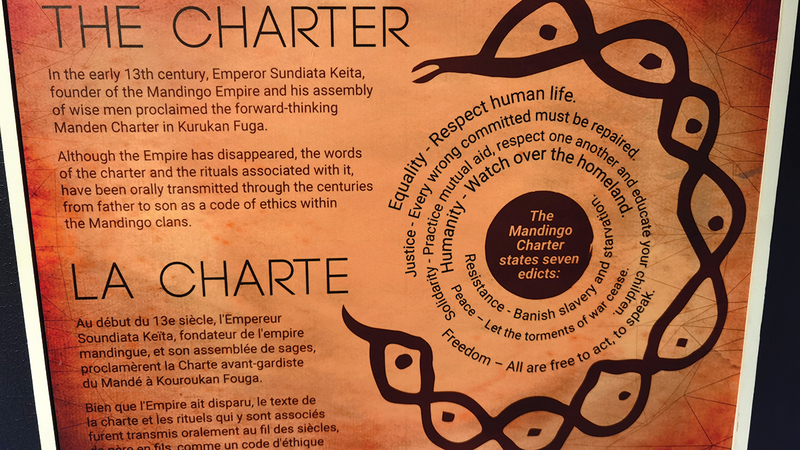 Inspirational women who have faithfully served their country.. Celebrated at the "Dubai Expo"

Visitors to Expo 2020 Dubai stand intently in front of two original wooden sculptures at the entrance to the Guinea Pavilion, one of which is for an antique seat, and the other is a anthropomorphic animal that expresses the heritage and culture of this ancient African country. The magnificent, which has a great human history, and it is enough to be the cradle of the first written human rights document to be displayed by its pavilion at Expo 2020 Dubai.

The Guinea pavilion celebrates women models who have faithfully served their country and achieved tangible successes, including the young human rights defender Hajja Idrissa Bah, who fought for women’s rights in Africa, founded the Guinean Women Leaders Club, and the former president of the Children’s Parliament, and fought for a long time against violations that have long affected women in the black continent. Such as assaults, early forced marriage, and violence against women, and achieved great successes, and contributed to the enactment of laws and decisions that are fair to women in her country and continent.

While Jenin Martain Cissé, who was born in 1926, is one of the most important female models that Guinea celebrates in its pavilion at the "Dubai Expo." Security in 1972.

The pavilion also shed light on another muse, Jenin Makwali, the symbol of love and art, who transferred what is known as African ballet (the folk dance in Guinea) to the world, and traveled to many countries to present her art as an exceptional ambassador for her country. The nation”, due to its impact, which is still tangible until now.

Like all the pavilions of the countries participating in the "Expo Dubai", the visitor's heart is related to the humanitarian aspects that he highlights, and in the Guinea pavilion - which celebrated its national day at "Expo 2020 Dubai" - the visitor stands long before this country's long record as the home of the first written global document Human rights, known as “Korokan Foga”, issued in the era of the Mandingo Empire, and included principles that are not very different from those contained in the current human rights document. Rather, they preceded the world in abolishing slavery, and UNESCO classified it as a great human cultural heritage.

The Mandingo Empire was founded in the thirteenth century by Emperor Sundiata Keita, who put these principles with a retinue of the sages of the empire, and despite the demise of his kingdom, his seven principles are still passed down from generation to generation, to serve as a great moral charter for this state, and dealt with the values ​​of equality, justice, and retribution, Courage, mutual aid and assistance, educating children and raising them in a sound manner, peace and patriotism, and freedom of opinion and expression.

Guinea chose to present itself at the Dubai Expo, not as the first source of water in West Africa, but as a promising social and economic engine in its region, based on great historical foundations and promising development programs, to play a prominent role in the development of Africa in recent decades.

The waters are the historical catalyst for the diversity of life in Guinea. On the banks of the Niger River, from which it originates, the ancient Mali Empire emerged and flourished, and with the decline of the Atlantic Ocean, the British, Portuguese and French found their way to these lands, to begin colonial campaigns, and Guinea is the first country to be freed from colonialism.

The pavilion did not overlook the cultural aspect of Guinea, as it displayed a number of prominent artistic features, including the mask of the "goddess" or nimba, which symbolizes fertility, and is the most famous of all Guinean masks, and inspired the famous artist Pablo Picasso.

Colonel Fatimuta Binta Diallo is classified as one of the greats of Guinea. She is a model of courage and toughness, as she is the first female pilot in Africa. She was chosen by President Ahmed Sakou Toure to pilot his personal helicopter, after it invaded a field that had been monopolized by men for years, followed by many women later.

• Young human rights defender Haja Idrissa Bah fought for women's rights and against violations that have long affected women on the African continent, and she founded the Women's Leaders Club of Guinea.

• The pavilion sheds light on Jenin Macaulay, the symbol of love and art, who brought what is known as African Ballet (the folk dance of Guinea) to the world.