JO-2022 / Cross-country skiing: the French relay, in bronze, faithful to its Olympic meeting

The bronze medal in the relay is starting to look like French property: for the third time in a row, the cross-country skiing Blues have been invited to the podium in the 4x10 km relay at the Games… 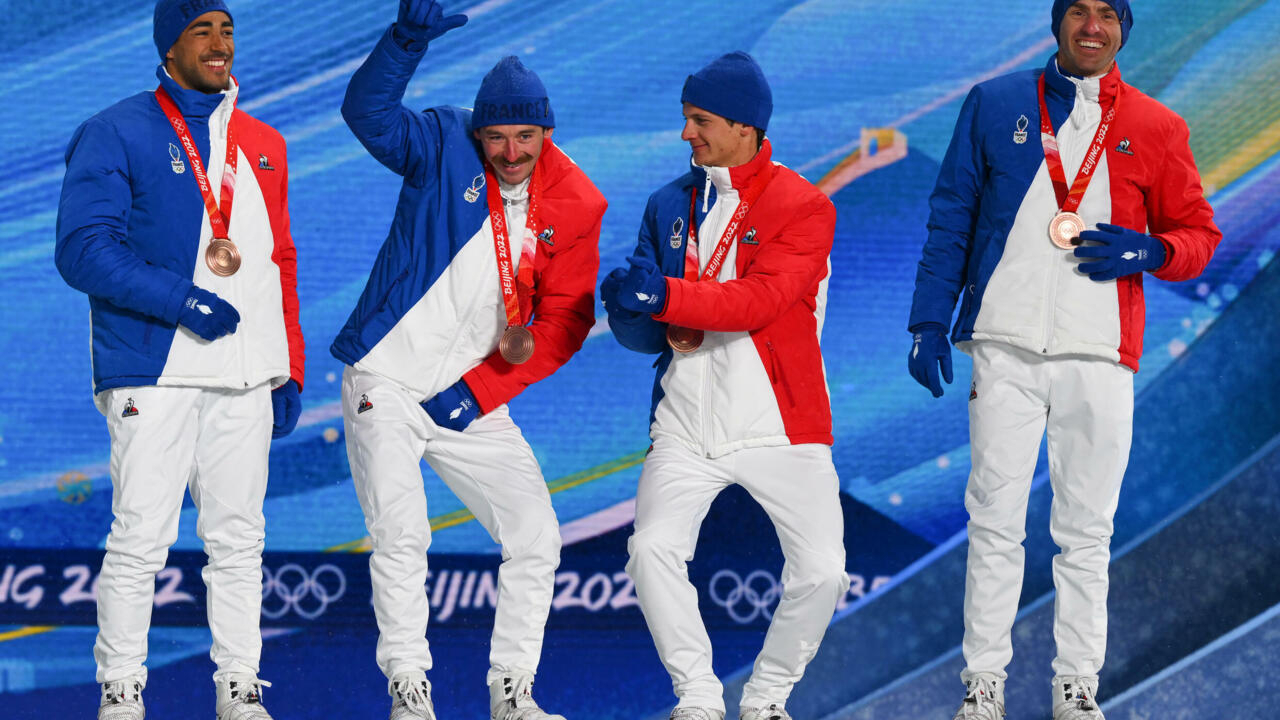 They finish behind the untouchable Russians and the Norwegians, whom the French have made doubt until the end.

What does it matter if Maurice Manificat, the last torchbearer and leader of the Blues, had to let the Norwegian cador Johannes Klaebo go in the final, his teammates Clément Parisse, Richard Jouve and Hugo Lapalus exulted when he arrived on the line, falling in arms after emotionally falling in fresh snow.

The joy of Frenchman Maurice Manificat, and his teammates, at the arrival of the 4x10 km relay at the Beijing Olympics, February 13, 2022 at the cross-country skiing site in Zhangjiakou Pierre-Philippe MARCOU AFP

And that was just the beginning: for long minutes again, then on the podium, we shouted a lot in French on the Zhangjiakou track, including the war cry of the tricolor cross-country skiers, inherited from a famous video from the French internet. : "Who am I? I am a gentleman!"

"It's true that we are the only ones to make a bit of a barouf", observes Parisse.

"This is only the beginning", promises Lapalus, repeating that this medal "was not written in advance".

Even if these same four Blues were already on the bottom step of the Worlds podium last year, the fortnight had started badly for them.

The sprinters' dream of a medal has evaporated (Jouve says he "took several days to recover") and Manificat, in the season disrupted by injuries, missed his goal, the skiathlon (23rd).

"We were at the bottom"

"We experienced so many emotions with the sprinters", book "Momo".

The joy of Frenchman Maurice Manificat and his teammates, after their bronze medal in the 4x10 km relay at the Beijing Games, on February 13, 2022 at the cross-country skiing site in Zhangjiakou< Odd ANDERSEN AFP

And, indeed, when Finns, Germans and finally Swedes exploded in the group of pursuers, the Blues held.

"It was the Swede, really, that we had to blow up," comments Manificat.

The now quadruple bronze medalist was the last of the rest of the world - excluding Russians and Norwegians - to crack in the almost blizzard of Zhangjiakou, -13°C on the thermometer and snow galore.

Extreme conditions in which the Blues have surpassed themselves thanks to their esprit de corps.

"It's the relay, explains Parisse. Personally, I manage to surpass myself in this race with the energy of everyone, the staff, the whole team. On the skis, there is something extra and it needed that."

Frenchman Clément Parisse poses during the official presentation of the French Olympic and Paralympic teams, on October 4, 20221 in Romilly-sur-Seine, who will participate in the 2022 Beijing Games Geoffroy VAN DER HASSELT AFP / Archives

A collective dynamic immortalized by a class photo at about twenty.

"We celebrate it as a group, with the athletes, the staff and also those who do not run", described in the tone of the evidence Manificat, questioned by an American journalist marked by the outpourings of tricolor joy.

"The day to change the color of the medal"

"I dreamed of it so much, of that and with these guys... it's phew, what", couldn't believe the youngest of the four, Lapalus, the only one to experience for the first time the taste of an Olympic medal.

The 23-year-old cross-country skier, with his signature mustache and the air of Asterix, "is asserting himself more and more as one of the great hopes of French cross-country skiing", praises French coach Alexandre Rousselet after the race, "a little frustrated" despite everything.

Frenchman Hugo Lapalus, during the 4x10 km relay at the Beijing Olympics, on February 13, 2022 at the cross-country skiing site in Zhangjiakou Odd ANDERSEN AFP

"I felt it was the day when we could change the color of the medal", he reacts.

It took less than ten seconds.

The Russians were out of reach, relegating Team "Norge" to more than a minute.

"I would have liked to play a little more, in quotes, with Klaebo", loose with a hint of regret Manificat.

He will have to have a little left over for the mass start on Saturday.

Like Jouve who, in the team sprint on Wednesday, has a serious chance of a medal with Lucas Chanavat.