On a journey starting from the distant past, where Syria wrote its hymn thousands of years ago, to the tunes of this era, musician Iyad Al-Rimawi accompanied the visitors of Expo 2020 Dubai, the night before last, during the premiere of the huge musical project “Syrian Rhapsody”, presented by suo suite 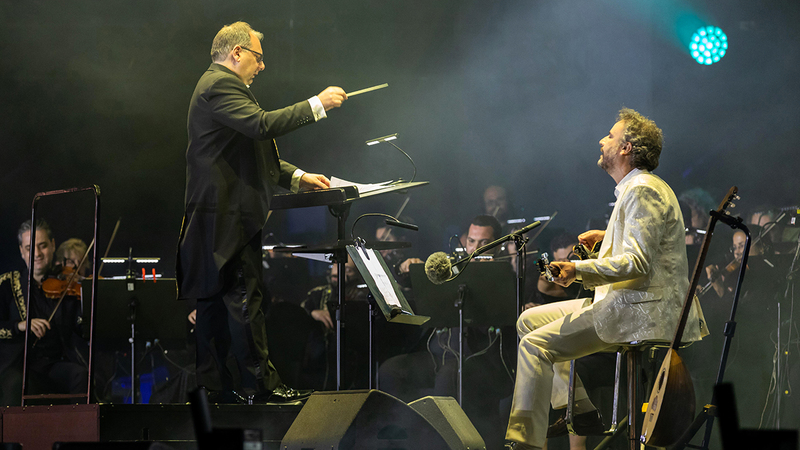 Iyad Al-Rimawi begins the "Epic" from the oldest written hymn

On a journey starting from the distant past, where Syria wrote its hymn thousands of years ago, to the tunes of this era, musician Iyad Al-Rimawi accompanied the visitors of Expo 2020 Dubai, the night before last, during the premiere of the huge musical project “Syrian Rhapsody”, presented by Syria Pavilion, in cooperation with the Syrian Trust for Development.

Yesterday, large crowds gathered in front of the jubilee platform at Expo 2020 Dubai, to enjoy the high-end melodies and the story of the beautiful tune in the project, which is one of the most important productions related to the global human musical heritage.

It is presented by Iyad Al-Rimawi, who worked for many months on composing music, and redistributing some historical notes related to this epic work.

"Syrian Rhapsody" highlights important periods in the history of music.

The show begins with a translation of the oldest written song known to mankind, "Hymn to Nikal", then takes the audience to the era of Syriac hymns, which are the oldest forms of the church's collective singing, passing through the wonderful songs of Islamic mysticism, to end with a historical merging of several songs from different eras.

The work with each era included the performance of supplications and supplications, in order to finally gather the musical genres on the stage in harmony and harmony, in a reflection of the unique state of Syrian harmony.

The creator, Iyad Al-Rimawi, previously revealed to "Emirates Today", that he worked on the project for many months, to summarize the experience of many years of research in the musical human heritage, Syrian and international, adding, "Through this work, we wanted to say that we can always provide the best productions. If objective conditions exist for that.”

He continued, "From here, the cooperation with the Syrian pavilion at (Expo Dubai) and the Syrian Trust for Development, and with great support from the International Exhibition, came out with a formula that we are fully confident that it will be one of the largest musical productions in the world for this year, and we chose (Expo Dubai) to launch the global show. The first came self-evident, as it is the most prominent event currently in the whole world.”

The huge musical project "Syrian Rhapsody" seeks to convey a message that expresses the conviction of the Syrians that what unites humanity is much greater than what divides it, as the work seeks to present a message of peace and love from Syria through the "Expo Dubai" platform, which brings the world together in one place.

• A large audience of "Expo Dubai" visitors of several nationalities were keen to watch the show.

• The project is a summary of the experience of many years of Iyad Al-Rimawi's long research into the human musical heritage.