“Pander to nationalists”: why the Russian ambassador to the United States called the supply of American weapons to Ukraine extremely dangerous

Russian Ambassador to the United States Anatoly Antonov considers US actions to militarize Ukraine to be erroneous and extremely dangerous. According to him, by doing so, Washington panders to the "nationalist group in Kiev", which is doing everything to turn the Russian-speaking population "into a persecuted minority." Antonov also commented on the numerous allegations against the Russian Federation of preparing an “attack” on Ukraine, urging the United States “not to play scenes for the gullible.” From his point of view, the true goal of this campaign is “to construct an alibi for possible UAF operations against Donbass.” Analysts are of the same opinion. According to them, the actions of the West are aimed at fomenting a conflict in the Donbass. 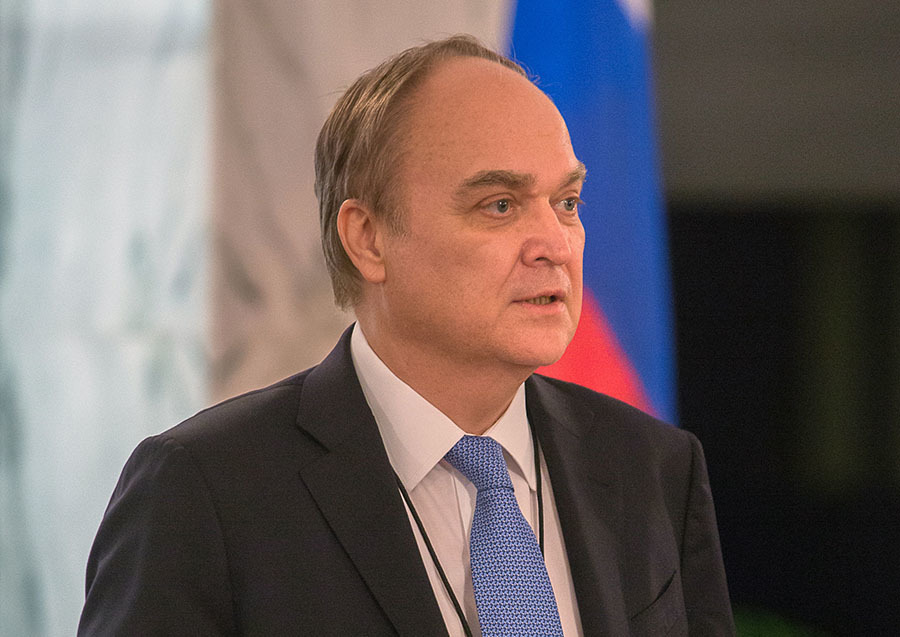 The US actions to militarize Ukraine are wrong and extremely dangerous, Russian Ambassador to Washington Anatoly Antonov said in an interview with Newsweek.

“We consider the current American actions to pump weapons to Ukraine wrong and extremely dangerous.

Thus, the United States is pandering to the nationalist group in Kiev, which is doing everything to turn the Russian-speaking population into a persecuted minority in an ethnocratic state, ”said the ambassador.

In addition, Antonov commented on US intelligence reports about Russia's alleged plans to conduct so-called "false flag operations", as well as information from Newsweek sources that claim that Russia "may attack Russian-speaking residents of Ukraine" to justify its military operation against Kiev.

“This lie is part of the information war against Russia.

For several months now, Washington has been disturbing the whole world with statements that Ukraine is about to become a victim of “Russian aggression”.

However, bad luck came out, since there is no attack.

Apparently, therefore, for greater persuasiveness, “leaks” of some intelligence data with the blasphemous and unfounded accusations you mentioned were used, ”said the Russian ambassador.

He also urged the US "not to play scenes for the gullible".

“The essays on the topic of Russian operations ‘under a false flag’ seem to be aimed at constructing an alibi for possible UAF operations against Donbass,” Antonov said.

In addition, according to the ambassador, one gets the feeling that American PR people, in an effort to compromise Moscow, are acting on the principle of "throw as much dirt as possible, maybe something will stick."

“We know the price of such “compromising evidence” of the American intelligence services, which were deeply disgraced by handing the US Secretary of State a test tube with white powder to justify the invasion of Iraq,” Antonov said.

At the same time, he assured that Russia was not going to attack anyone.

According to him, Moscow needs good neighborly relations "with the fraternal Ukrainian people."

“We are concerned about the US position on the situation around Ukraine.

Vladimir Vladimirovich Putin and Joe Biden agreed in Geneva that the Minsk agreements are the basis for resolving the crisis in the southeast of this country.

Our common task is to force Kiev to fulfill its obligations, sit down at the negotiating table with representatives of the DPR and LPR and peacefully agree on everything, ”said the diplomat.

Recall that the West continues to escalate the situation around Ukraine, declaring that the Russian Federation is allegedly preparing for an “invasion” into the neighboring republic.

In particular, this week the US announced that it had information about Russia's plans to stage a fabricated attack and use it as a pretext for further intervention.

According to the latter, the Russian side, among other things, is allegedly considering the option of creating a propaganda video material "containing shocking footage of staged explosions."

“They will show dead bodies, grieving people performed by special actors, as well as images of destroyed sites or military equipment - and all this is entirely fabricated by the Russian special services,” Price said.

According to him, Russia can allegedly use this kind of video “as an artificial pretext and possible justification for military aggression against Ukraine.”

At the same time, he did not support his claims with any evidence, noting only that if the Russian authorities did not distribute the video, this would not mean that "they did not have such plans."

After that, Russia categorically rejected the information of the United States about the preparation by Moscow of this kind of video material.

Western media also continue to actively exaggerate the topic of a possible Russian "invasion" of Ukraine.

Thus, the American agency Bloomberg published on its website the title “Russia invaded Ukraine”, but then admitted the mistake and deleted the publication.

“We're heading for many scenarios, and the headline 'Russia Invaded Ukraine' was accidentally posted on our site around 4:00 pm ET today.

We deeply regret this mistake.

The title has been removed, and we are investigating the reason (of this error. -

),” the agency said in a statement.

The Kremlin reacted to the resonant “mistake” of Bloomberg.

As the press secretary of the Russian President Dmitry Peskov noted, this incident demonstrates how dangerous the situation is, “provoked by endless aggressive statements that come from Washington, from London, from other European capitals.”

It is also worth noting that, while spinning the hysteria about a possible “attack” by Russia on Ukraine, the West does not stop supplying weapons to Kiev, and also redeploys a military contingent to Europe.

As the head of the Ministry of Defense of Ukraine Oleksiy Reznikov said on his Twitter page on February 3, the seventh US plane landed in Boryspil with military assistance.

According to him, this time we are talking about 85 tons of ammunition for grenade launchers.

The next day, the Canadian Department of Defense announced that it had sent a C-177 Globemaster aircraft with non-lethal weapons, including reconnaissance equipment, to Ukraine.

In turn, Polish Prime Minister Mateusz Morawiecki announced the supply of weapons to Ukraine next week.

Meanwhile, according to media reports, the first group of US military arrived in Poland, sent by Washington to strengthen NATO countries in Eastern Europe.

Prior to this, Reuters reported that military equipment of the United States began to arrive on Polish territory.

Earlier, the American side informed that the US military had already arrived in Germany.

According to experts, the fears of the Russian side regarding the transfer of American and Western weapons to Ukraine look quite reasonable.

“If the concentration of modern types of military weapons increases, then the likelihood of their use - accidental or intentional - also grows.

The actions of the United States and the West as a whole to strengthen the militarization of Ukraine greatly increase the likelihood of provocations by Ukrainian nationalists, as well as the Armed Forces of Ukraine in the Donbass, ”political analyst Alexander Asafov said in a commentary to RT.

According to him, the radical forces, having gained access to a generous portion of weapons, can begin even more destructive actions in eastern Ukraine.

As Vladimir Batyuk, chief researcher at the Institute of the USA and Canada, noted in a conversation with RT, mass arms supplies to Kiev could help Ukrainian radicals get the erroneous impression that Washington and NATO are allegedly ready to get involved in a conflict in Donbass.

“However, neither the alliance nor Washington will do this.

They only want to aggravate the situation in Donbass,” the expert argues.

From his point of view, the current aggressive information campaign of the United States and the West is designed to “disguise” the possible military actions of Kiev in the Donbass.

“All this hype around the alleged Russian “invasion” is just a cover for the preparation of the Ukrainian military’s operation to “clean up” the Donbass.

Now this information campaign is difficult to stop, although even the President of Ukraine Volodymyr Zelensky admits that the United States and the West have gone too far, declaring an imminent “invasion” of Russia and an imminent “war,” Batyuk believes.

A similar opinion is shared by Alexander Asafov.

“The West, and above all the United States, needs this to provoke the Russian Federation and launch the next round of the conflict in Donbass.

But the United States needs to feed the Ukrainian theme and the “Russian invasion” narrative all the time, otherwise these issues will disappear from the world agenda and from the media headlines.

Therefore, Washington deliberately creates absolutely artificial news stories like “ducks” about the alleged preparation of a propaganda video by Moscow, ”the expert explained.

He also did not rule out that Bloomberg's "erroneous" headline could have been published with the intent to keep the Ukrainian issue in the spotlight of the Western public, since there is no evidence of aggressive plans attributed to Moscow.

“The goal is to attract the attention of the audience at any cost, even at the expense of their reputation,” the analyst believes.

The actions of the collective West, led by the United States, are aimed solely at raising the degree of tension in the situation around Ukraine, the political scientist added.

“Washington will not change tactics.

His task is to maintain the relevance of the topic, to maintain the intensity of passions so that it is possible to blame Russia for the escalation of the situation, although this tension is a direct result of the actions of the West, ”Asafov concluded.