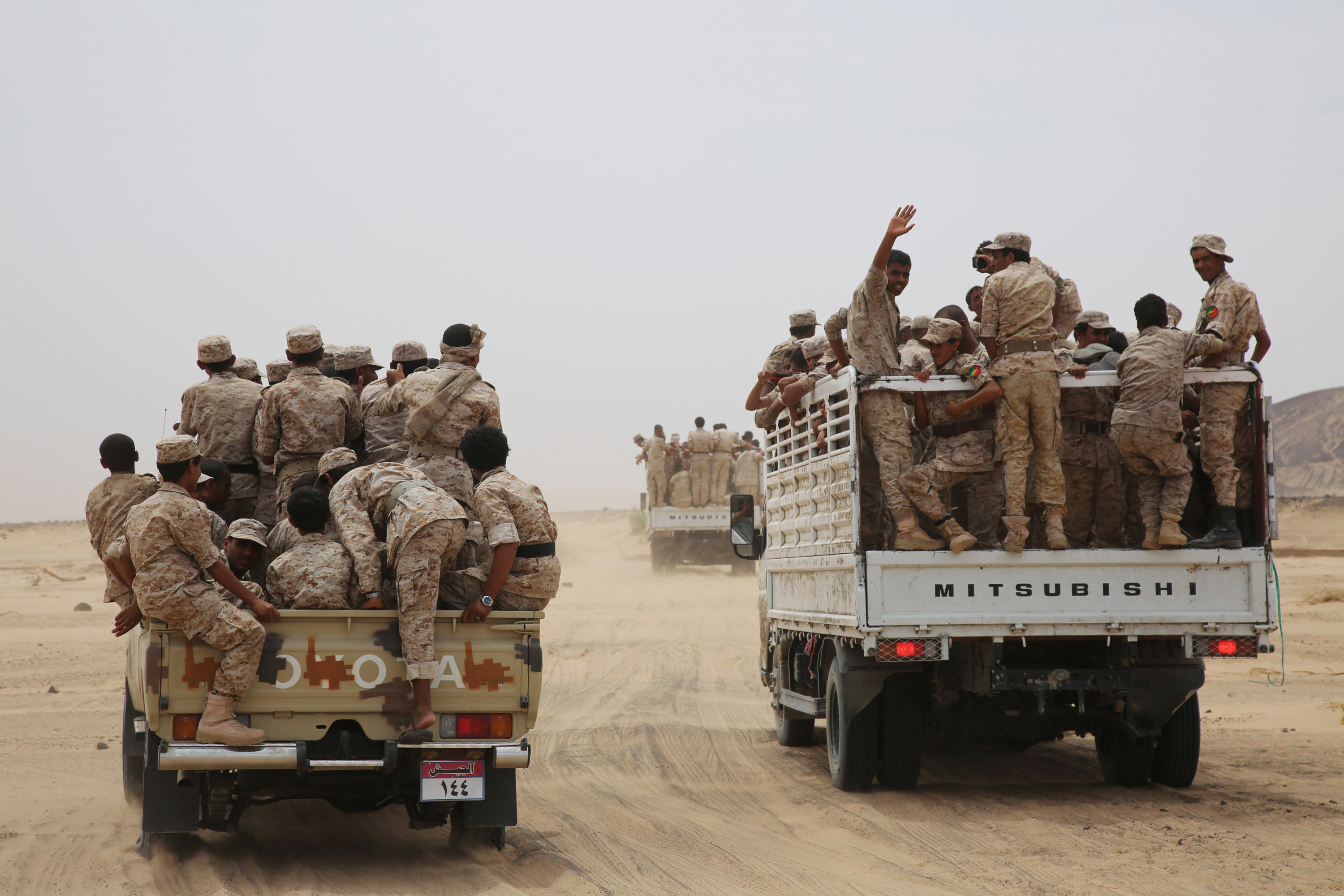 The forces of the "Happy Yemen Brigades" today launched a large-scale military operation against militia positions in Hajjah Governorate, northwest of Yemen, and advanced towards the city of Haradh, the center of the district, and imposed a siege on it from three sides.

The sources confirmed the liberation of the border guard camp “Al-Muhssam” in Haradh, and also took control of the “Al-Husnain” mountains, and secured the international line linking Hodeidah and Hajjah, with a length of 70 kilometers.

According to field sources, the militias collapsed following the advances of the "Happy Yemen Brigades" in Hajjah, and the strikes of the Arab coalition fighters, which led to the destruction of an operations room, a missile launcher, weapons stores and vehicles in several areas in the districts of "Haradh, Hiran and Abs" in Hajjah.

According to the sources, the operation that was launched in Hajjah aims to complete the liberation of Haradh district, join forces with the fronts of Hiran, Abs and Midi, and advance through several axes towards new districts in Hajjah and the neighboring Saada governorate.

About two weeks ago, the Haradh and Abs fronts have witnessed battles and mutual bombing between the forces of the Fifth Military Region, with air cover from the coalition, during which the Houthi militias have incurred heavy losses.

In Saada, the forces of the Yemeni army’s Third Brigade liberated today, Asif, new positions in the Al-Malahiz front in the Al-Dhaher district, near the fronts north of Hajjah, in conjunction with the operation of the Happy Yemen Brigades in Haradh aimed at liberating the entire Yemeni soil.

The Hajj and Saada operations come a few days after the visit of the commander of the joint forces in Yemen, Lieutenant General Mutlaq bin Salem Al-Azima, to the joint forces participating in the coalition to support legitimacy in Yemen on the southern borders of the Kingdom of Saudi Arabia, in which he confirmed that the Houthi militias met all peace initiatives Attempts to calm down are flagrant violations, and all opportunities for peace have been lost.

In Ma’rib, the legitimate Yemeni forces backed by the “Happy Yemen” brigades, and the coalition fighters, took control of the road linking Ma’rib and Sana’a, after fully securing the Mehzam Mas area in the Mudaghl district, and continued their advance towards the starboard of Wadi Al-Jafra, and penetrated into the Majzar district towards the Al-Jawf junction.

Field sources in Marib stated that the battles centered along the theater of hostilities in the districts of Raghwan and Madghal, on the northwestern front of the governorate, and spread to separate locations from the neighboring Majzar district, opening the way for an incursion towards the governorates of Al-Jawf and Sana’a.

On the southern fronts, the battles continued between the two sides in the vicinity of the "Umm Reish" camp, concentrated on the outskirts of the Al-Faliha and Al-Aarif area, to the east of Al-Juba.

The operations of the army and the Happy Yemen Brigades coincided with the coalition’s warplanes launching a series of supportive raids on Houthi sites and mechanisms in separate areas of the districts south and northwest of Ma’rib, and in separate areas of the capital, Sana’a, the Al-Nahdain camp in the vicinity of the presidential house, south of the capital, and on the Al-Dimli base near Sana’a Airport International.

Houthi sites were also bombed in Al-Ajashir in the Khub and Al-Sha`f district in Al-Jawf, and another in the Al-Zaher district in the Saada governorate, and a Houthi operations room in the Al-Rawd-Tabisha area in the isolation of Bilad Al-Wafi in the Jabal Habashi district, west of Taiz, was also bombed.

Today, the Arab coalition announced the implementation of air operations against Houthi targets in the governorates of Ma'rib and Hajjah, which led to the destruction of 9 combat vehicles, causing human losses in the ranks of the militias.

In Taiz, the battles continued on the fronts of the Maqbna and Jabal Habashi districts, with direct support from the coalition fighters, in which Tabab and several villages were liberated in the vicinity of the Al-Ahtoub area in Maqbna, while the army and resistance forces launched an artillery attack on Houthi positions in Al-Sarah in Jabal Habashi District, inflicting direct casualties.

In Al-Dhalea, the joint and southern forces were able to bombard Houthi positions in the Shamriya-Battar sector, after Houthi snipers targeted civilians in the villages of the area, leaving Houthis dead and wounded, including a prominent field leader.

In Al-Hodeidah, two children from one family died when a landmine left behind by the militias exploded while they were grazing sheep in the village of Al-Jaruba, south of Al-Tahita district, south of the governorate.

In August, the militias liquidated the prominent tribal sheikh, Saleh Muhammad al-Shadadi, as he was leaving his house at dawn today in the village of Mahasha, near the governorate center.