The U.S. Navy's latest stealth fighter, the F-35C Lightning II, while training in the South China Sea, collided with the deck of an aircraft carrier while landing. 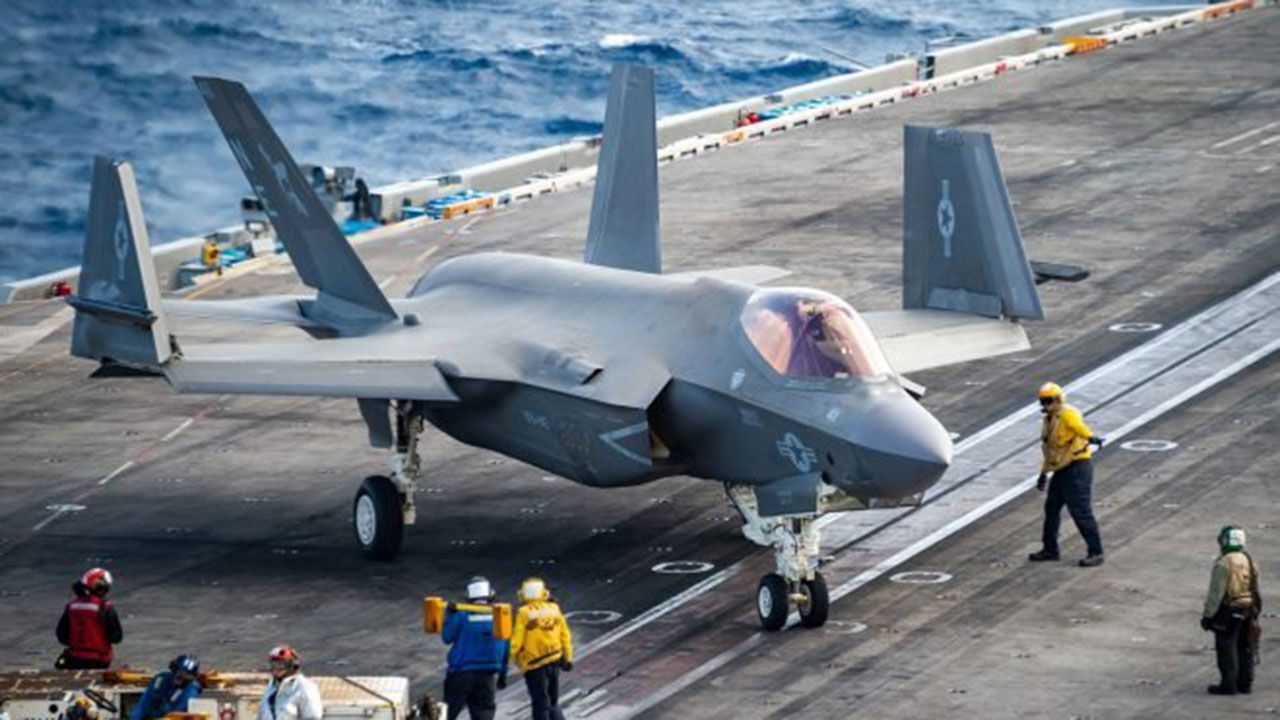 The U.S. Navy's latest stealth fighter, the F-35C Lightning II, while training in the South China Sea, collided with the deck of an aircraft carrier while landing.

According to a U.S. Navy statement, the accident took place on the aircraft carrier USS Carl Vinson on the 24th, and seven people were injured.

The pilot made an emergency escape, but was rescued safely by helicopter.

Three injured were taken to hospitals in the Philippines and four were treated on board the ship.

The U.S. Navy did not say whether the F-35C that crashed was still on deck or crashed into the sea.

The landing was the first crash of an F-35C designed by the US Navy for an aircraft carrier, CNN reported.

The F-35, manufactured by Lockheed Martin of the United States, is a next-generation fighter with a stealth function.

Carl Vinson, where the accident occurred, was the first aircraft carrier the F-35C was deployed on.

The F-35C was also mounted on the Abraham Lincoln aircraft carrier.

Chinese media "U.S. cut by his own sword"

The incident, which took place amid escalating US-China military tensions in the South China Sea, is widely reported by Chinese media.

China's state-run media, Global Times, reported that an American carrier suffered a muscle-stretching injury while showing off her muscles in the South China Sea.

Citing Chinese military expert Zhang Jun-seo, a researcher at the China Naval Research Institute, the Global Times quoted: “It has been almost half a year since the Carl Vinson left the US mainland in August last year, and it continues to perform high-intensity training and movement. This is very rare. This not only exhausts the crew physically and mentally, but also poses a problem of excessive use of various on-board equipment,” he pointed out.

The Global Times also sarcastically said that there was an accident in October of last year when a US nuclear-powered submarine collided in the South China Sea, saying, "The US wielded a large sword and eventually cut itself off."

People's Daily, a media affiliated with Renminzhuen, published an article pointing out the safety issues of the F-35.

Citing an expert's remarks, the article said, "It is very likely that the F-35C crashed into the sea. If the out of control fighter had rushed to another area on the deck, only 7 people would not have been injured." The -35 landed in the fuselage due to an electromagnetic failure, and in November of last year, a British F-35B crashed into the sea shortly after takeoff from the aircraft carrier HMS Queen Elizabeth.

Other Chinese media, including Jake, claimed that the US did not provide details, either because the US had reduced the damage or the plane that fell into the sea might be towed by a submersible in another country.

Earlier, in the case of a US nuclear submarine accident in the South China Sea, the Chinese Ministry of Foreign Affairs even stepped in to pressure the US.

"We have asked the United States for an explanation several times, but only a brief statement has been issued," said Zhao Lijian, spokesperson for Zhao Lijian.

The time when the Carl Vinson aircraft carrier group entered the South China Sea along with the Abraham Lincoln carrier group was on the 23rd.

At the time, the Pentagon said, "The two carrier groups will conduct operations to strengthen combat readiness, etc."

Previously, the two carrier groups conducted a joint exercise in the waters south of Okinawa, Japan with a Japanese Maritime Self-Defense Force ship for six days from the 17th.

Again, China was furious and set fire to the fire.

This is the largest number since a total of 148 Chinese military aircraft entered Taiwan's ADIZ, the largest ever for four days during the National Day holiday in early October last year.

The next day, on the 24th, 13 military aircraft were sent to Taiwan's ADIZ, including two J-16D electronic and electric aircraft.

It was first unveiled at the Zhuhai Air Show in September last year, and practical training began in November.

Taiwan is nervous about the first J-16D mobilization in China's armed protests.

Lin Yingyu, a professor at Zhongshan University in Taiwan, said, "It is very important to strengthen the response to electronic warfare, saying that whether or not to take the lead in electronic warfare in the future can affect the victory or defeat of the war."

As for Taiwan, China regards it as its own territory and is willing to unify by force if necessary.

But the Democratic Progressive Party-led Taiwanese government has made it clear that it will not succumb to Chinese pressure to maintain the status quo.

Rising military tensions and conflicts between the United States, China, and Taiwan are both justifications for increasing military power and, at the same time, a huge burden.

In addition to major and minor accidents, there is also the possibility of accidental collisions.

To prevent this, the United States and China held a general military meeting last month to discuss preventing accidental military clashes in the Indo-Pacific region.

And China is expected to maintain stable international relations at least until the 20th Party Congress in the fall of this year, when President Xi Jinping's third term is decided.

However, under the pretext of protecting the homeland, the pressure on the South China Sea and Taiwan is likely to not stop, and the United States, which is exerting all-round pressure on China, has no intention of backing down.

As long as the new Cold War between the US and China continues, the South China Sea and Taiwan are bound to remain as 'Asia's gunpowder'.